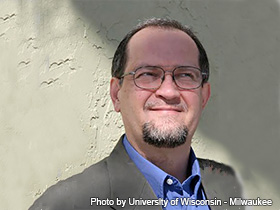 Born in Colombia and raised in Pittsburgh, poet Maurice Kilwein-Guevara has received numerous accolades for his poetry and teaches at the University of Wisconsin at Milwaukee.

Born in Belencito, Colombia in 1961 and raised in Pittsburgh, Maurice Kilwein Guevara is an accomplished poet whose poetry explores multicultural boundaries through his own experiences. He is the recipient of various literary awards and has given poetry performances and workshops in Mexico, Colombia, Costa Rica, Spain, Cuba, and throughout the United States.

Straddling two cultures, Maurice Kilwein Guevara was born in Belencito, Colombia, in 1961 and grew up in the Hazelwood neighborhood of Pittsburgh, Pennsylvania, and in the nearby suburb of Bethel Park, where he graduated from high school in 1979. His parents, John Henry and Beatriz Lucila Kilwein, immigrated to the city with his brothers two years after his birth.

Kilwein Guevara attended the University of Pittsburgh and majored in both English writing and Psychology, receiving his degrees in 1983. Soon after, he enrolled at Bowling Green State University to pursue his MFA in Creative Writing and later graduated in 1986. That same year, he married Heather Stiff, but the couple divorced while Guevara was studying for his doctorate at the University of Wisconsin - Milwaukee. Presenting a successful dissertation comprised of short stories, he completed his PhDin English and Comparative Literature in 1990.

In 1991, Kilwein Guevara returned to Pennsylvania to teach, working as an Assistant Professor at Indiana University of Pennsylvania. He married teacher and poet Janet Carol Jennerjohn in the same year. Remaining an Assistant Professor until 1997, Kilwein Guevara was promoted first to Associate Professor of English with tenure, and then in 1999 to the rank of Full Professor. Absorbed as he was by the study of literature, culture, and poetry, he joined the Modern Language Association, for which he served as a Special Delegate for Creative Writing in the MLA Delegate Assembly during the mid-1990s, the Poetry Society of America, and the Pennsylvania College English Association.

He has published four volumes of poetry that explore cultural interactions, immigrant perspectives, and his own youth as a multicultural artist: Postmortem (1994), Poems of the River Spirit (1996), Autobiography of So-and-so: Poems in Prose (2001), and POEMA (2009). As described by the Poetry Foundation, "Kilwein Guevara's poems often use overlapping voices and languages to explore the tensions and simultaneities that complicate the lives of immigrants in mid-America."

Employing a sense of universality to his work—an old woman reaching to sweep gypsy moth cocoons away from a tree, the narrator as a young boy listening to his father play music—Kilwein Guevara dissolves the distance between his two homes of Columbia and Pennsylvania in Poems of the River Spirit. The poems in his latest collection, POEMA (2009), "...are made of the stuff of daily life: 'broken pallets, seeded grass, fingernails, and tamarack needles.' It is through these things," says Pablo Medina, author of The Cigar Roller, "that the poet's spirit springs forth, angry and tender, grieving and playful. Guevara has achieved great balance in his poems. POEMA is the work of a mature and remarkably gifted poet."

In 1999, his play "The Last Bridge/El Ultimo Puente" was performed by the Off-Broadway production company Urban Stages. He also co-wrote and appeared in a film entitled, "To Box Clouds" (Migrant Productions).

His poem "Once When I Was in the Eighth Grade," from Poems of the River Spirit, was selected for publication by the Public Poetry Project of the Pennsylvania Center for the Book in 2002.

Additional honors include a Fulbright Scholarship in Colombia and awards from the Pennsylvania Council on the Arts and the Pennsylvania Humanities Council. His poetry has been included in numerous anthologies, such as Touching the Fire: Fifteen Poets of Today's Latino Renaissance (1998), The New American Poets: A Bread Loaf Anthology (2000), No Boundaries: Prose Poems by 24 American Poets (2003), and The Autumn House Anthology of Contemporary American Poetry (2005). He is a founding member of the National Latino Writers' Association and has previously taught at Vermont College, Indiana University of Pennsylvania, Universidad de las Am??ricas (Mexico), and Universidad del Norte and Universidad Javeriana (Colombia).

At the time of this writing, Kilwein Guevara teaches in the MA and PhD Programs in Creative Writing and Latino Studies at the University of Wisconsin - Milwaukee. He lives in Milwaukee, Wisconsin, with his wife and two sons and gives frequent poetry performances and workshops, including in locations such as Mexico, Colombia, Costa Rica, Spain, Cuba, and throughout the United States.