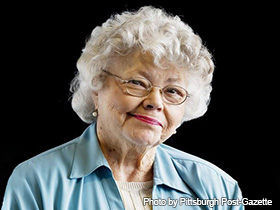 A nationally-recognized advocate for children's literature, University of Pittsburgh professor Margaret Mary Kimmel was also an author of children's books.

Margaret Mary Kimmel was born in 1938 in Gary, Indiana. In college, Kimmel began her lifelong service to literature by becoming a librarian. Eventually, she moved to Pittsburgh to get her doctorate. After receiving her PhD, Kimmel remained at the University of Pittsburgh as a professor. Kimmel had also served as a consultant for Mister Rogers' Neighborhood and co-edited (with Mark Collins) a book about the show. Kimmel was very active in promoting literature in Pennsylvania, especially children's literature in Western Pennsylvania, and was also an advocate for people with disabilities. She died of Leukemia on June 10, 2014, at the age of 76.

Margaret Mary Kimmel was born on May 12, 1938, in Gary, Indiana. In her youth, she and her siblings enjoyed listening to stories that her great aunt and great uncle would tell. Originally, when Kimmel began college, she had intentions of becoming a teacher. However, one summer she worked for a public library's trailer (similar to a bookmobile) and decided that she would become a librarian.

Kimmel was well known for her tireless work and dedication to Pennsylvania, literature, and children. For a time, Kimmel did consulting work on the Public Broadcasting Service (PBS) kids' show "Mister Rogers' Neighborhood" and eventually co-edited (with Mark Collins) a book about the show entitled Mister Rogers' Neighborhood: Children, Television, and Fred Rogers(1996).

"...[I]t was through her narratives that she was sometimes able to effect change," Anya Sostek wrote in the Pittsburgh Post-Gazette. "She helped create the Center for Women with Disabilities at Magee Women's Hospital, advocating for improved facilities, sharing personal anecdotes [herself diagnosed with polio since age four] about her difficulties getting medical services such as a simple mammogram."

Margaret Mary Kimmel was a Professor Emerita in the School of Library and Information Sciences at the University of Pittsburgh. She died of Leukemia on June 10, 2014, in Pittsburgh, Pennsylvania. She was 76. Kimmel is survived by her sister, Cathy Kimmel, of New York City, and brother, Mike Kimmel, of Houston, Texas.