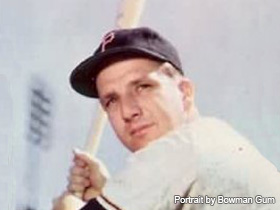 Born in 1922, Ralph Kiner developed a love for the game of baseball as a child in California. His dream to become a professional baseball player came true in 1940 when he signed with the Pittsburgh Pirates. Kiner went on to lead the National League in home runs for his first seven years. Despite his shortened career due to a back injury, Kiner was inducted into the Major League Baseball Hall of Fame in 1975. When his career came to a close, Kiner became a broadcaster for the expansion New York Mets in 1962 and continued with the team until his death in 2014.

Ralph McPherran Kiner was born on October 27, 1922, in the copper mining town of Santa Rita, New Mexico. At the age of four, his father, Ralph Macklin Kiner, passed away. The tragedy forced his mother, Beatrice Kiner, to accept a higher income job in the small town of Alhambra, California. It was in Alhambra that Ralph Kiner met the Bodkin family — boys of his age whose father was a former semipro pitcher — and developed his love of baseball. Kiner continued to play baseball through his high school career. He was signed by the Pittsburgh Pirates in 1940 as a center fielder. The Pirates were an unsuccessful baseball team at the time, so this allowed Kiner the best chance to play in the major league.

After two years in the minor leagues, Kiner's baseball career was put on hold. At the height of World War II, Kiner decided to enlist in the Navy before a possibility of being drafted. He spent two and a half years in the Pacific before returning to the game he loved. The time in the Navy altered Kiner's style of play significantly. Kiner put on 30 pounds during the war and returned home as a 6' 2", 195 pound man. The transformation from a quick and scrawny minor league center fielder to a slow and thick major league left fielder was quite evident. In spring training of the 1946 season, Cleveland Indians pitcher Bob Lemon said to Kiner, "I remember you. I used to have to guard against the bunt when you batted. Now you can't run a lick." Although he did not pick up a bat in two years, Kiner displayed his power by leading the National League with 23 home runs in his rookie season.

The next season, Pittsburgh acquired Hall of Famer Hank Greenberg, a childhood hero of Kiner's. Greenberg became a mentor and a best friend to Kiner. Kiner said of Greenberg, "He lived first class and he taught me to do the same." One of Greenberg's biggest influences on Kiner was in hitting. Greenberg moved Kiner to the back of the batter's box to allow for the greatest pulling potential. The new stance allowed him to put all of his strength into trying to hit home run balls to left field. After some initial struggles, Kiner ended up with 51 home runs which set a record for the most home runs in a single season by a National League player. Greenberg retired after the 1947 season, but his impact on Kiner's life remained. The two remained close friends, and Greenberg was Kiner's best man in his first marriage to Nancy Chaffee, a professional tennis player, in 1951.

Kiner went on to lead the National League in home runs for the first seven years of his career. He had a career high of 54 home runs in 1949. Kiner blasted so many home runs to left field that they named that part of Forbes Field "Kiner's Korner." Kiner's salary continued to rise as he became the first professional baseball player to earn $100,000. One of Kiner's classic sayings was, "Singles hitters drive Fords, home run hitters drive Cadillacs." But, Kiner's salary could not rise forever. When Kiner asked for another pay raise in 1952, Branch Rickey, the General Manager for the Pittsburgh Pirates, told Kiner, "We finished last with you, and we can finish last without you." Kiner was shipped off to the Chicago Cubs in 1953 and retired after a year in Cleveland in 1955 when his statistics fell to career lows. Kiner's career was shortened due to an injured back. Despite only ten years in the major leagues, Kiner made the Hall of Fame in 1975. It was the last year for Kiner's name to appear on the ballot. He received 75 percent of the votes, the minimum required, needed to enter the Hall of Fame. Due to his relatively brief career, Kiner's statistics were fairly low for a Hall of Famer. He was a six-time All Star from 1948-1953 and might have won a National League MVP award if he had played for a better team.

After his playing career, Kiner did not leave baseball. His best friend, Hank Greenberg, had found a job for Kiner as an announcer for the expansion New York Mets. Kiner has been a broadcaster for the Mets since their inception in 1962. He was said to have been hired for the expansion Mets because he was used to losing from his playing days with the Pirates. Once a name for where he would hit home runs at Forbes Field, Kiner's Korner became the name of his post-game talk show in the Mets locker room. Another change in Kiner's life was a new love. Kiner remarried in 1963 to DiAnn Shugart after 17 years and three kids with Nancy Chaffee. They remained married until Shugart passed away in 2004. Kiner became well-known for his Yogi Berra-like sayings, including: "Solo homers usually come with no one on base" and "All of the Mets' road wins against the Dodgers this year occurred at Dodger Stadium." After a long life in baseball and endearing himself to generations of fans in Pittsburgh and New York, Ralph Kiner passed away of natural causes in his Rancho Mirage, California, home at the age of 91.

The Pirates had long since given up any of the bad feelings Rickey's trade of Kiner might have generated; in 1987, they retired his uniform number 4. On Kiner's passing, team president Frank Coonelly said "All of us at the Pittsburgh Pirates have heavy hearts upon learning of Ralph Kiner's passing. Ralph was one of the greatest players to ever wear a Pirates uniform and was a tireless ambassador for the game of baseball. He was a treasured member of the Pittsburgh community during his seven years with the Pirates." The team whose voice Kiner became in over fifty years of broadcasting paid him this tribute: "Ralph Kiner was one of the most beloved people in Mets history — an original Met and extraordinary gentleman. After a Hall of Fame playing career, Ralph became a treasured broadcasting icon for more than half a century. His knowledge of the game, wit, and charm entertained generations of Mets fans. Like his stories, he was one of a kind."