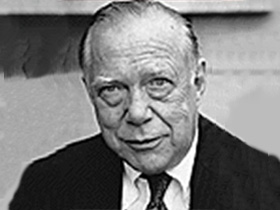 Lock Haven native, Kintner, acareer Army officer who retired with the rank of colonel, penned Peace and the Strategy Conflict (1967) and several other books dealing with politics and military issues.

William Roscoe Kintner was born April 21, 1915, in Lock Haven, Pennsylvania. A graduate of West Point in 1940, Kintner went on to earn an MA and PhD from Georgetown University. He served in the United States Army until 1961, a veteran of World War II and the Korean War. Kintner retired with the rank of Colonel. Kintner taught at the University of Pennsylvania from 1961 until retiring in 1986. During his time at Penn, he served as the deputy-director and then director of the Foreign Policy Research Institute and editor of its journal Orbis. He was an accomplished author on foreign affairs, writing many books on international relations, arms control and strategy, with a focus on the Cold War. Kintner continued his work in world affairs until his death in 1997 at the age of 81.

William Roscoe Kintner was born on April 21, 1915, in Lock Haven, Pennsylvania. His parents were Florence and Joseph, who was a lawyer. Kintner attended the United States Military Academy at West Point where he graduated with a B.S. in 1940. Kintner then continued his education, getting both an MAand a PhDfrom Georgetown University. Kintner served the Army for over 20 years and was a veteran of both World War II and the Korean War. In 1961 he retired from military service with a rank of colonel.

After his retirement, Kintner began teaching at the University of Pennsylvania. As a professor of political science, he also served as deputy director of the university's Foreign Policy Research Institute from 1961 until 1969 at which time he became the director. Other professional achievements include working at the planning board for the office of the Secretary of Defense, the National Security Council and the Operations Research Office at Johns Hopkins University. Furthermore, he served as a liaison to the Central Intelligence Agency. In 1973 Kintner began one of his most prestigious but challenging endeavors, serving as ambassador to Thailand under President Ford. As ambassador during the closing phases of the Vietnam War he faced the daunting task of trying to secure Thai support for a war from which the United States was planning to withdraw. After completing his tenure as ambassador in 1975, Kintner returned to Penn where he took over as President of the Foreign Policy Research Institute and remained at that post until 1982. He also served as editor of Orbis, the FPRI's journal which served as a forum for lively debate and discussion on foreign policy.

During his impressive career Kintner authored various books on world affairs. The first work he had published was his doctoral dissertation The Front is Everywhere (1950), which was a study of the Soviet Communist Party. Many of his works focused on the Cold War, Communism, and the Soviet Union. In his work A Forward Strategy (1961)(with Robert Strausz-Hupe and Stefan T. Possony), Kintner offers a view of democracy as the form of government "best fitted to inspire men with the sense of what they owe to one another and what they owe to themselves." He proclaims that if Communism was superior to democracy they would inevitably win the Cold War, but that America's strong democratic ideals coupled with certain industrial, economic, educational, tax, and administrative reforms could easily put America on the winning side of ideological debate. The authors offer a strategy for how America can improve many of its outmoded systems in order to beat the Soviets.

Six years later in his book Peace and the Strategy Conflict (1967), Kintner argues that America must maintain its strategic superiority in order to maintain peace and security in America as well as world at large. While recognizing the importance of diplomacy and other factors in maintaining peace, Kintner insists that arms reduction is not the path to peace. Kintner continued to write about issues of foreign policy, arms control, and strategic planning until his death in 1997. His final book, The Role of Ancient Israel "Written with the Finger of God": A Swedenborgian Perspective of the History of The Israelites From Abraham to Jesus, was published in 1996.

Kintner died of cancer on February 1, 1997, at his home in Bryn Athyn, Montgomery County. He was survived by his second wife, the former Faith Child Halterman; daughters Kay Kintner Caldwell, Jane Kintner Williams-Hogan, and Gail Kintner Markou; a son, Carl Hyatt Kintner; 15 grandchildren; and three great-grandchildren. His first wife and the mother of his children, Xandree died in 1986.