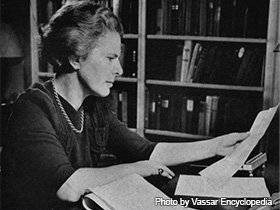 Critic Virginia Kirkus was born on December 7, 1893 in Meadville, Pennsylvania. Before opening the Kirkus Bookshop she taught English and history, worked various writing and editing jobs in New York, and even headed the children's department at Harper & Brothers. She married Frank Glick in 1936 and retired from Kirkus Reviews in 1962. Kirkus died on September 10, 1980 in Danbury, Connecticut.

Virginia Kirkus was born on December 7, 1893, in Meadville, Pennsylvania. She was the daughter of Isabella (nee Clark) and Reverend Frank Maurice Kirkus, an Episcopal minister. She attended both the Misses Hebbe School in Wilmington, Delaware and the Hanna More Academy in Reisterstown, Maryland before going to school at Vassar College in Poughkeepsie, New York, from which she graduated in 1916. Kirkus then went on to Columbia University's Teachers College and subsequently landed a job as a teacher in Wilmington, Delaware. There she taught English and history until 1919. While working miscellaneous writing and editing jobs in New York, Kirkus managed to write and publish Everywoman's Guide to Health and Personal Beauty in 1922.

From 1926 to 1932, Kirkus headed the children's department at Harper & Brothers, which later became HarperCollins Publishers. After refusing to cut back her department during the Depression, Kirkus opened the Kirkus Bookshop Services in 1933, an idea that came to her in the middle of the night. Kirkus Bookshop Services gave unbiased reviews of books that could be purchased by booksellers who could, in turn, discern which books to buy and sell. The reviews were published as a bimonthly bulletin. Kirkus Reviews became popular among booksellers due to Kirkus' accuracy in reviewing books. The number of subscriptions to Kirkus Reviews jumped from around 20, at the beginning of the project, to now include nearly every publishing firm in the industry. Three years after opening the service, Kirkus married Frank Glick, a department store executive.

Kirkus' reviews quickly became a life or death sentence for each of the books it reviewed each year. This was due to Virginia Kirkus' incredible skill of picking out "sleepers," or books that Kirkus felt did not get the appropriate recognition. For the most part, Kirkus remained consistent in her reviews. However, she did have a few mistakes. During her time as a reviewer, Kirkus admitted to "missing on" Hervey Allen's Anthony Adverse, which she dismissed for its length, and Thomas Wolfe's Of Time and the River, which she said had only "snob appeal."

While she was not working at the Kirkus Reviews, Virginia Kirkus also wrote books. In 1945, she published a book called A House for the Weekends, in which she chronicled the details of running a second home. She published The First Book of Gardening in 1956. The book included information on backyard gardening, as well as vegetable recipes.

Virginia Kirkus retired from her business in 1962, but remained a consultant for the next two years. She died at the age of 86 in a hospital in Danbury, Connecticut on September 10, 1980.