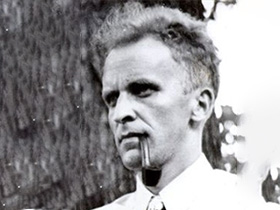 Jim Kjelgaard was one of six children. He was born December 10, 1910, in New York, New York. He spent most of his childhood growing up on a large farm and within the Pennsylvanian mountains. He was a conservationist who loved the outdoors. Jim had a great love for animals and nature, which was apparent in all of his writings. Jim had an especially great love for dogs. After marrying his wife in 1939, one of his greatest novels was published, Big Red (1945). It was a novel depicting loyalty and companionship between a man and his dog. Jim won the Boys Club Award for Big Red in 1948. He was also awarded the Spur Award from the Western Writers of America in 1958 for Wolf Brother (1957) and the Boy's Life Award in 1959 for Ulysses and His Woodland Zoo (1960). Jim was an inspiration for many children readers and other writers as well. Jim Kjelgaard died by suicide on July 12, 1959.

Jim Kjelgaard was born December 10, 1910, in New York, New York. Jim's father, Carroll W. Kjelgaard, was a physician married happily with five sons and one daughter. Kjelgaard was the fourth oldest. Kjelgaard and his siblings lived on a seven hundred and fifty acre farm in the Allegheny Mountains of Pennsylvania for the beginning of his childhood. It was the outdoors, which provided a playground for all the children. Dave Drakula, writing in Jim Kjelgaard-From the Bigwoods to Hollywood, recounted a time when Kjelgaard and his brother Henry were outside playing when Kjelgaard spotted a bear. Kjelgaard and Henry climbed up the apple tree to escape the bear. Once the bear was gone Kjelgaard got down from the tree screaming and yelling as he ran into the house. In the meantime, Henry was too small to get out of the tree himself and was stuck there. The bear came back again and stared Henry down with Kjelgaard laughing in the distance. This is where one of Kjelgaard's first love of bears comes from and later appeared in his books such as Buckskin Brigade (1947).

As a child, Kjelgaard read all the books he could find. Although his family was often low on money, Kjelgaard's parents always tried to support Kjelgaard and provide as many books for him as they could. The family's farming venture failed, and Jim and his family moved to Galeton, Pennsylvania. It was at that point that Kjelgaard began to show interest in writing. Kjelgaard made a desk out of a box so that he could start writing poems and stories on a typewriter. In addition, Kjelgaard was becoming an avid hunter, trapper, and fisherman, and his love for dogs was huge. Unfortunately, during this time Kjelgaard was having symptoms of epilepsy. He was brought to Johns Hopkins Hospital in Baltimore, Maryland, where his problem was diagnosed as a tumor, though it did not require surgery at the time. Kjelgaard was still able to continue on with his life and adventures and show his love for the outdoors.

Kjelgaard attended Galeton High School where he maintained his love for writing. Kjelgaard would eagerly send his adventurous stories to hunting and fishing magazines, but nothing came of it until his senior year in high school in 1928, at the age of 19. He did not receive any money for his story, instead he received a free two-year subscription to an outdoors magazine with his story featured on the cover of the next issue. After high school, Kjelgaard was enrolled at Syracuse University where he took two years of extension courses while working various jobs. Kjelgaard then decided to pursue his writing career in 1938, at the age of 28. He began writing more articles for outdoor/nature magazines, such as Fur-Fish-Game, Argosy, and Liberty. Kjelgaard had his first novel, Forest Patrol, published that same year in 1941. The book was based on the adventures Kjelgaard shared with his brothers in the early 1930s when one of his brother's became a forest ranger. The plot especially reveals Kjelgaard's concerns about conservation. In 1939, Kjelgaard married Eddie Dresden, one of his enthusiasts. Kjelgaard then moved to Milwaukee, Wisconsin, and had a baby girl. Kjelgaard and his wife varied in their opinions on the outdoors and dogs, two of Kjelgaard's main themes in his books. Kjelgaard and his wife and daughter traveled West, which inspired many of Kjelgaard's settings in his novels.

Kjelgaard's literature is most recognized among young readers. He displays themes such as honor, loyalty, courage, and perseverance in many of his books. These values are often shown through a man and animal relationship. They conquered blizzards and other adventures together that bring them to maturity and respect for one another. Kjelgaard's love for dogs shows vibrantly in his writings. In 1945, Big Red was published which was a story of companionship between a man and his dog. Big Red is a show dog, a great Irish setter that seventeen-year-old Danny Pickett instantly falls in love with, while he and his dad are making their living as mountain trappers.

Big Red won the Boys' Club Award in 1948. Kjelgaard was also awarded the Spur Award from the Western Writers of America in 1958 for Wolf Brother. This award is granted to writers who are reputable and noted for their distinguished writings about the American West. This award is among one of the oldest and most respected in American literature. Kjelgaard also received the Boy's Life Award in 1959 for Ulysses and His Woodland Zoo. Kjelgaard loved featuring animals in all of his stories. He was very straightforward in his plots and made animals and nature come to life.

On July, 12 1959, Kjelgaard died by suicide in Phoenix, Arizona, at the age of 48. He is regarded and remembered as a grand, brave, thoughtful, and beyond ordinary soul. Drakula writes,"He walked with the strides of a giant and we ordinary folk had to trot along as best we could, and now he deserves and has earned-accolades and prayers for the peace he has." Thus, Kjelgaard inspired and continues to inspire, not only writers to keep writing, but also children and their love of reading.