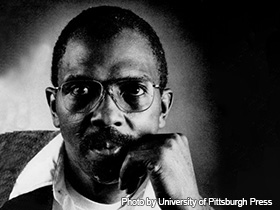 Etheridge Knight, a poet of the Black Arts Movement, taught at the University of Pittsburgh and at Lincoln University.

Etheridge Knight was born in Mississippi in 1931 and grew up in Kentucky before quitting school and joining the army. While serving a sentence in Indiana State Prison for robbery, Knight began to write poetry, which led to his prominent role in the Black Arts Movement. Upon release from prison, Knight wrote and published five volumes of poetry, including several poems written while working as the writer-in-residence at the University of Pittsburgh. He was awarded National Endowment for the Arts grants in 1972 and 1980 and a Guggenheim Fellowship in 1974. Knight died of lung cancer in Indianapolis in 1991.

Etheridge Knight was born in Corinth, Mississippi in 1931, but grew up in Paducah, Kentucky. Knight was one of seven children of Etheridge and Belzora Cozart Knight and experienced a difficult, poverty-stricken childhood. He quit school after the eighth grade and began frequenting pool halls and bars where he was introduced to a rough side of life. Knight's new haunts and acquaintances introduced him to a life involving crime, habitual drug use, and toasting, an African-American oral tradition of telling long narratives. These tales were typically formed in rhyming couplets and described "street life" using obscenities and harsh language. Toasting focused on drugs, sex, illegal activities, and violence. This was Knight's first opportunity to express himself artistically.

In 1947, Knight joined the USArmy and served as a medical technician in Korea until 1951 when he received a shrapnel wound. After returning to the United States, Knight succumbed to a narcotics addiction that began before his enlistment and continued when he became addicted to the morphine with which he was being treated. During a period of depression and disillusionment, Knight was arrested for a robbery that he committed to support his drug habit. From 1960 to 1968, he served part of a 10 to 25 year sentence at Indiana State Prison. During his time in prison, Knight discovered his life's purpose: "poeting," his personal term for the art of writing poetry. "I died in 1960 from a prison sentence and poetry brought me back to life," he explained during one of the many interviews he gave in his career.

While in prison, Knight rediscovered his interest in toasting and he found a receptive audience among his fellow inmates. Through toasting, Knight learned the importance of fully developing characters and situations as a means of engaging his audience and keeping the inmates interested in his toasts. He soon applied his talents of toasting to writing poetry. By 1963, Knight began writing poetry and identifying himself as a poet. He also started establishing contacts with significant figures in the African American literary community. These contacts included Gwendolyn Brooks, who visited him in prison and critiqued his work; Sonia Sanchez, a poet whom he later married; and Dudley Randall, owner of Broadside Press.

Randall's small press published Knight's first book, Poems from Prison, in 1968; the book's publication coincided with his release from prison. Soon afterwards, his second book, Black Voices from Prison, was published in 1970. These two works focus on the same subject matter: racial pride, prison life, and community and political involvement.

After his release from prison, Knight's writing became increasingly sophisticated. Over the next few years, he held the position of writer-in-residence at several universities, including two years, 1968 and 1969, spent at the University of Pittsburgh. While living in Pittsburgh with wife Sonia Sanchez and their family, Knight spent time as poetry editor for Motive magazine and continued writing his third book, Belly Song and Other Poems, which was published in 1973. His third work incorporates new life experiences and attitudes about love and race, and Knight was praised for the work's sincerity. Belly Song was nominated for the National Book Award and the Pulitzer Prize. Knight's time in Pennsylvania was very important to his career: his work during this period won him both a National Endowment for the Arts grant in 1972 and a Guggenheim Fellowship in 1974.

Knight's awards, particularly the Guggenheim Fellowship, allowed him to continue studying the art of African-American oral traditions as the basis of black poetry. These studies were evident in Knight's fourth book, Born of a Woman: New and Selected Poems. This book was published in 1980, the same year that Knight received a second grant from the National Endowment for the Arts.

During this time, Knight was divorced from Sanchez, remarried twice, and fathered three children. These years of Knight's life were a continual battle with the drug and alcohol problems that had started at an early age. His final volume of poetry, The Essential Etheridge Knight, was published in 1986. In 1990, shortly before his death, Knight earned a bachelor's degree from Martin Center University in Indianapolis (now Martin University) for American poetry and criminal justice. He was also appointed its poet laureate.

While in prison in 1965, Knight wrote in a notebook, "I will write well. I will be a famous writer. I will work hard and my work will be good. I will be a famous writer. My voice will be heard and I will help my people." Knight's five volumes of poetry began with his expressions of prison life and broadened to reveal his feelings on poverty, crime, racial identity, and personal experiences and relationships. In his interview with Ken McCullough for Callaloo magazine, Knight explained that he viewed poetry as "a kind of trinity—the poet, the poem, and the people." By infusing his works with personal themes and larger issues, such as race, Knight expressed himself and established connections with the black community.

Knight rose from a life of poverty, crime, and drug addiction to become exactly what he expressed in his notebook in 1965: a voice that was heard and helped his people. Knight died in Indianapolis, Indiana, of lung cancer on March 10, 1991.