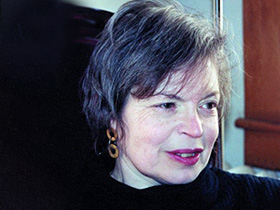 A resident of Selinsgrove, Sandra Kohler won the AWP Award Series in Poetry for her second collection, The Ceremonies of Longing.

Sandra Kohler is a poet and professor born in New York City on August 9, 1940. She received a PhD in English from Mount Holyoke College and Bryn Mawr College. After completing her degree, Kohler taught English classes at the Prince of Wales College and Bryn Mawr College. Kohler published many of her poems in journals before compiling her first collection of poetry, The Country of Women, in 1995.

Sandra Kohler was born on August 9, 1940, in New York, New York to Philip A. and Frances Iger. She attended college for many years acquiring her Ph.D. throughout her early adult life. She received her B.A. at Mount Holyoke College where she graduated magna cum laude in 1961. She then transferred to Bryn Mawr College where she received her M.A. in 1966 and her Ph.D. in 1971. While she was earning her M.A. and Ph.D., Kohler married Richard Kohler in 1961; however, she divorced him the year she finished her education. Six years later, in 1977, Kohler remarried to Dr. Walter George Hagenbuch. During this time, she had a son, Charles John.

Kohler's teaching career began at the Prince of Wales College on Prince Edward Island where she taught English from 1967 to 1968. She then moved to Bryn Mawr College where she taught English until 1977. According to Brandon Pfefferkorn, an assistant to Dr. Gary Fincke of Susquehanna University, after teaching at Bryn Mawr, Kohler took time off to focus on her son and her writing career.

Before compiling her two collections of poetic work, Kohler had published many poems in several journals including: The American Poetry Review, CALYX Journal, The Southern Review, The Chaffin Journal, The Women's Review of Books, and many more. Kohler's first book of poetry, The Country of Women, is a collection of poems about the day-to-day experiences of women. She specifically writes about sex, motherhood, and life as a woman. A favorable review written by Dulcy Brainard of Publisher's Weekly states: "Kohler's careful attention to the daily struggles and realities of many women's lives, to the predictable but mysterious cycles of time and growing older, renders with both wisdom and astonishment her conviction that 'Nothing is more exotic than the real.'" The language that Kohler uses in her poetry cannot be called anything but beautiful. Despite her complex messages/feelings, Kohler's simple images offer poems from which one can easily learn and relate. Look at, for example, the poem "My Real Body," a section of a larger poem entitled "The Country of Women:"

The poetry from her newest collection, The Ceremonies of Longing, is as simplistic and beautiful as the poetry from The Country of Women. However, Kohler's new collection is not as delicate as the first. An example is from lines 27-29 of "Write:" "I am writing for time, clarity, the lucidity of parsed/moments. I am writing to leave a small fossil that/says I lived pressed into the medium that killed me." Another example is found in lines 18-19 of "Burden:" "I am older than summer, more generous/than fall, I will be crueler than winter."

Throughout her writing career, Kohler has received the Calapooya Collage Poetry Prize, 1994, and the Individual Artist Fellowship in Poetry twice from the Pennsylvania Council on the Arts, 1985 and 1990.

Currently, Kohler lives with her husband, Dr. Walter G. Hagenbuch, and son in Selinsgrove, Pennsylvania. According to Pfefferkorn, the poet and professor likes watching the Philadelphia Flyers hockey team, reading, gardening, and walking on the Isle of Que along the Susquehanna River.