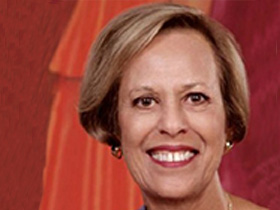 Born on February 10, 1930, in New York City, Elaine Lobl (E.L.) Konigsburg grew up in various towns in Pennsylvania. She graduated from the Carnegie Institute of Technology and the University of Pittsburgh with a major in chemistry, and she would later become a science teacher schoolteacher and a writer of juvenile fiction. Konigsburg has won the Newbery Medal twice, for From the Mixed-Up Files of Mrs. Basil E. Frankweiler and The View From Saturday. Read more here.

Elaine Lobl (E.L.) Konigsburg, born on February 10, 1930, in New York, was the second of three daughters of businessman Adolph Lobl and Beulah Klein Lobl. Konigsburg spent her childhood in several small towns in Pennsylvania while growing up such as Phoenixville and Farrell, and Youngstown, Ohio. As a child, she read and was inspired by books likeThe Secret GardenandMary Poppins. In her teen years, she worked as a bookkeeper at the Shenango Valley Provision Company meat plant in Sharon (1947-1948), where she met her future husband, David Konigsburg. She graduated from high school in Farrell, Pennsylvania, as the valedictorian of her class.

Attending the Carnegie Institute of Technology (now the Carnegie-Mellon University) in Pittsburgh, she earned her chemistry degree and BS in 1952, even after suffering a couple of explosive accidents in the laboratory. On the side, she worked as a manager in a dormitory laundry, a playground instructor, a waitress, and a library page.

In July of 1952, she married David Konigsburg (by then an industrial psychologist), and they would have three children together—Paul, Laurie, and Ross. As a graduate student at the University of Pittsburgh (1952-1954), Konigsburg worked as a research assistant in a tissue culture laboratory. She taught science at Bartram, a private girls' school in Jacksonville, Florida (1954). After leaving teaching a year later to raise her children, she returned to Bartram from 1960 to 1962. When her husband was transferred along with the family to Port Chester, New York, in 1962, she took weekend lessons at the Art Students League.

The inspiration for her first novel came from her daughter, Laurie, hesitantly discovering new friends after moving to Port Chester in New York, an experience which culminated in Konigsburg writingJennifer, Hecate, Macbeth, William McKinley, and Me, Elizabeth(1967) about two young outsiders of different races fitting into a New York community. TheBooklist and Subscription Books Bulletincalls this "a fresh, lively story, skillfully expressed as thought by a ten-year-old," and Konigsburg's writing is "crisp, the narrative which ends with the stormy transformation of pretend witches into ordinary friends, abounds in humor, and the two witches, especially inscrutable Jennifer, who is a Negro, are characters to be remembered." It was nominated for the Newbery Medal and won a Newbery Honor Book runner-up award.

Written that same year and competing against Konigsburg's first book,From the Mixed-Up Files of Mrs. Basil E. Frankweilerr(1967) concerns two sibling schoolchildren escaping from a suburban life of boredom to live in the Metropolitan Museum of Art, an event Konigsburg says was also inspired by her children's finicky suburban nature. The book won the Newbery Medal in 1968.Kirkus Reviewsclaims "this one's a dandy—just as fast and fresh and funny, but less spoofing, more penetrating."

Zena Sutherland of theBulletin of the Center for Children's Booksdescribes this as "an engaging romp of a story, trembling the brink of unbelievability—but not quite getting there, since the setting is real and the children seem no less so—a sturdy, rational, thoughtful pair." Elva Harmon ofSchool Library Journalexclaims, "[This] is the kind of book our increasingly sophisticated pre-teens ask, for, and it has almost all they hope for in a book: humor, suspense, intrigue, and their problems acknowledged seriously but not somberly."

1997 brought Konigsburg her second Newbery Medal forThe View From Saturday, a novel told from the first-person perspectives of four members of a championship quiz bowl team and their paraplegic coach. Julie Cummins ofSchool Library JournalcallsThe View From Saturday"an ingenious story," wherein "Brilliant writing melds with crystalline characterizations in this sparkling story that is a jewel in the author's crown of outstanding work." Elizabeth Devereaux ofPublishers Weeklywrites that this book is "Glowing with humor and dusted with magic," and that Konigsburg "orchestrates a stunning quartet of harmoniously blended voices...Wrought with deep compassion and a keen sense of balance, her imaginative novel affirms the existence of small miracles in everyday life."

In Konigsburg's latest work,The Outcast of 19 Schuyler Place(2004), 12-year-old Margaret Rose is rescued from summer camp by her two eccentric uncles, and the girl soon wants to save two garden structures, "towers" built by the uncles, from demolition. Meg Wolitzer of theNew York Times Book Reviewclaims the author uses the main character's experiences "as a springboard to a much more interesting story that involves ideas about art and integrity," and Konigsburg's depiction of "outsiders and outsider art is, like the towers themselves, a thing of strange beauty."

Deborah Stevenson ofBulletin of the Center for Children's Bookscomments: "The hinge between the camp story and the towers story is somewhat creaky, but the towers themselves are evocatively depicted...there's a satisfying pacing and patterning to the unfolding of the anti-demolition defense," and the book "could be used to spice up an examination of outsider art or art in the community." Peter D. Sieruta ofThe Horn Book Magazinewrites, "Konigsburg tackles some big themes-the meaning of art, the power of community, and the importance of nonconformity-without sacrificing her usual incisive characterizations and inventive storytelling."

Konigsburg returned to Jacksonville in 1968 with her family, where she had spent much of her time gardening, painting, drawing, and walking on the beach. On April 19, 2013, E.L. Konigsburg died at age 83 in Falls Church, Virginia, after suffering a stroke. She is survived by her three children and five grandchildren. Her husband, David, died in 2001.

Konigsburg once said to New York Times writer, Paul Vitello, "Children's books are the key to the accumulated wisdom, wit, gossip, truth, myth, history, philosophy, and recipes for salting potatoes during the past 6,000 years of civilization.

Her masterful writing and art will honor her legacy for years to come.