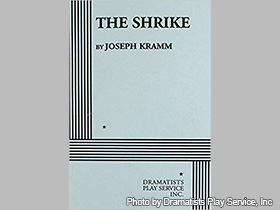 Philadelphia native, Joseph Kramm won the 1952 Pulitzer Prize in Drama for The Shrike (1952).

Joseph Kramm was born in Philadelphia, Pennsylvania, in 1907, and he developed a love for the theatre from an early age. After graduating from the University of Pennsylvania, Kramm began professional work in the theatre world, eventually moving to New York City to work in Broadway productions. Though he worked as an actor and director, Kramm's most renowned achievement came as a playwright, when he wrote The Shrike (1952), a story of a theatre director who finds his only way out of a mental hospital is by going under custody of his domineering and stealthily manipulative wife. The Shrike won the 1952 Pulitzer Prize for Drama. Kramm died in 1991.

From a young age, Joseph Kramm was interested in theatre. Born in South Philadelphia, Pennsylvania, in 1907, Kramm's mother took him to plays when he was a child, which kindled a life-long interest in the stage. Kramm acted in high school and continued to pursue his interest in college at the University of Pennsylvania. After graduating in 1928, Kramm worked for the Philadelphia Inquirer and acted for a local troupe. He soon moved to New York City, where he became a member of an acting company at the Civic Repertory Theatre.

In the 1930s, Kramm worked for various theater groups, most notably the Federal Theatre Project, which was part of the Works Progress Administration in Franklin Roosevelt's New Deal program. During World War II, Kramm was a cryptographer for the United States Army; he also performed in plays for members of the armed forces. After the war, Kramm headed to New York City, where he continued acting in plays. He also began directing. However, his most significant work was not as an actor or director, but as a writer.

By 1952, after 24 years as a professional in the theatre, Kramm had written nine plays. The first to be produced was The Shrike (1952). The play (the title of which refers to a predatory bird that sometimes kills prey by dropping it on thorns) is about a theatre director, Jim Downs, who tries to commit suicide, fails, and is sent to the mental health wing of the local hospital. His estranged wife, Ann, keeps him company as he recovers. But Jim begins to realize that recovery does not equate with his release. Jim is caught between the hospital, a place that begins to mentally drain him, and his manipulative wife. He eventually capitulates to Ann, giving the answers that he knows will release him from the hospital into Ann's custody.

The play opened at Cort Theatre on January 15, 1952. The New York Times review that was published the next day praised the play as an "exciting melodrama that is likely to scare the living daylights out of you." After years in the theatre, Kramm had written a hit. But, as he recalled in another New York Times article, it had been so many years coming that the excitement felt tenuous —especially after Kramm was fired from his day job at an advertising firm. Luckily for Kramm, The Shrike was both also a financial hit. The play won the 1952 Pulitzer Prize for Drama, marking Kramm as a playwright, and it was turned into a film in 1955.

In 1955, Kramm's second wife died onstage while performing in The Shrike. While he never again achieved the success he had found with The Shrike, Kramm continued to work in theatre for many years. He died in 1991.