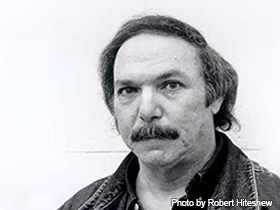 Philadelphia native Leonard Kress is the author of multiple poetry collections, including Living in the Candy Store (2011).

Leonard Kress was born in Toledo, Ohio. He received his MFA from Columbia University. He has written multiple books of poetry, including The Centralia Mine Fire (1987) and Living in the Candy Store (2011). He also translates Polish poetry. His poetry has been included in numerous journals, and he was one of the featured poets in Common Wealth: Contemporary Poets of Pennsylvania (2005). At the time of this writing, Kress is an Associate Professor at Owens Community College in Ohio.

Leonard Kress was born in Toledo, Ohio, to Bernard Kress, a research chemist and PhD from Columbia University, and Janet Shapiro Kress, a reading teacher of Lithuanian heritage. His family moved to Ambler, Pennsylvania, and eventually settled in Lafayette Hill in the northwest suburbs of Philadelphia. The most important geographic connection to Pennsylvania for Kress is his connection to Kensington, Philadelphia County, because of the significance of the area in inspiring his role as a public or community poet.

Kress attended Plymouth-Whitemarsh High School and then Lafayette College for his freshman year only. He transferred from Lafayette College to Temple University where he received a Bachelor's degree in Religion. Kress also attended Jagiellionian University in Krakow, Poland, where his concentration was in language and folklore studies. After completing his undergraduate studies, Kress lived in the Philadelphia area for several years; it was in these years Kress got involved in the reading scene in the city, the arts revival along South Street, and other locations throughout the city. Kress received his Master of Fine Arts in Creative Writing from Columbia University.

Kress was first published in Painted Bride Quarterly in 1973. He has written several books of poetry including his chapbook, The Centralia Mine Fire (1987), and books of poetry, such as Sappho's Apples (2001), Orphics (2003), and Thirteens (2010). Three of Kress's poems are included in a collection of poetry featuring numerous Pennsylvania poets. The book, Common Wealth: Contemporary Poets on Pennsylvania (2005), published by The Pennsylvania State University Press, features poetry celebrating the geography, history, and cultural heritage unique to Pennsylvania.

Kress' poetry, fiction, and prose have appeared in Artful Dodge, Iowa Review, Massachusetts Review, New Letters, Missouri Review, and American Poetry Review, among other journals. He has received grants in poetry and play writing from The Pennsylvania Council on the Arts (1981, 1987, and 1990) and The Ohio Arts Council (1997, 2001). According to Kress, his poetry does not embody a particular theme. Rather, his poetry is about presences: cities and neighborhoods, Poland and Polish literature, spiritual elements, and mythology, particularly the figure of Orpheus, one of the chief poets and musicians of antiquity in Greek mythology. In fact, in 2009, he published another poetry collection called The Orpheus Complex, which intertwines the ancient myth of Orpheus with his reflections on America today in his poems. Kress's goal for his readers is to connect with the language of his poetry—the song and the story.

In addition to his career as a poet, Kress translates works from Polish, including the poem Impenetrable Grotto (in The Cortland Review), a translation of a poem by Polish Renaissance writer Szymon Zimorowicz, and Pan Tadeusz, or The Last Foray in Lithuania (2001), originally written in 1834 by Adam Mickiewicz. Pan Tadeusz is recognized as the national epic of Poland, and is considered to be the last great epic poem in European Literature. Kress has also explored short-stories, the novel, nonfiction essays, and playwriting.

At the time of this writing, Leonard Kress teaches at Owens Community College in Ohio as a full-time faculty professor.