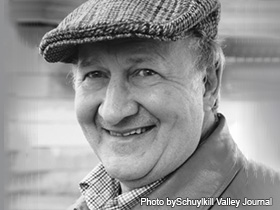 A widely-published poet in literary journals, Peter Krok lives in Havertown and works with the Manayunk Art Center's poetic activities.

Born in West Berlin, Peter Krok grew up in Kensington and Fairmount, Philadelphia, and at the time of this writing resides in Havertown, Delaware County. Krok is a poet whose work embodies the heart of the city and the American people as his Looking for an Eye (2008) exemplifies. His poem "You're Here, Walt" uses Walt Whitman as inspiration to represent American culture. Because of his connection with Philadelphia's red-brick row houses, he has become known as "the red brick poet." Along with his poetry, Peter Krok is the editor of the Schuylkill Valley Journal and the Humanities Director of the Manayunk-Roxborough Art Center.

Peter Krok was born in West Berlin, Germany, 1947, and then moved with his family in 1948 to Philadelphia where he grew up. As a young child, Peter Krok found an escape through books and reading. Krok graduated from Roman Catholic High School, and then attended LaSalle College, where he earned a BA in History in 1969. The following year he went to Ohio University at Athens on a fellowship for graduate studies in History. After the academic year suddenly ended amidst the turmoil of the Kent State killings, he did not return to Ohio. Worried about being drafted for Vietnam, he then enrolled at Temple University for Journalism. In 1995, he earned a Master's Degree in Government from the University of Pennsylvania. Peter Krok became a federal worker in a contract specialist position for many years; however, he is most well-known for his career as a poet.

Krok began publishing his poetry in 1970, and by 2006 he had published over one hundred and seventy poems. Over the years his work has appeared in periodicals and journals, such as Hyperion, Four Quarters, and The Christian Science Monitor. Select poems have also been translated into Russian, Spanish, and Greek. For its 1984 volume, The Yearbook of American Poetry selected Krok's "The Young Skater," and the very next year included yet another of his works, "You're Here, Walt." The editors of the Common Wealth: Contemporary Poets on Pennsylvania chose his poem "10 PM at a Philadelphia Recreation Center" for inclusion in their 2005 volume.

In 2008, FootHills Publishing issued Krok's first collection of poems, Looking for an Eye. While poetry has and remains his focus, he has also written literary essays and collaborated with Emiliano Martin on the performance piece, Federico Garcia Lorca and the Spanish Muse (1898-1998).

At the time of this writing, Peter Krok dedicates much of his time to serving as the editor of the Schuylkill Valley Journal, a position he has held since 2001. He is also the Humanities and Poetry Director of the Manayunk-Roxborough Art Center, where he has coordinated a literary series since 1990. Although he is retired from his job with the government and has settled down in a suburban neighborhood in Havertown, Pennsylvania, Krok continues to write poetry and kindle a part of his city of brotherly love.

Selected Poems in Periodicals and Anthologies