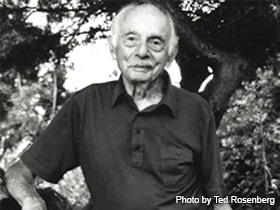 Two-time Poet Laureate of the United States Stanley Kunitz lived in Lumberville during the 1950s.

Born July 29, 1905, Stanley Kunitz grew up in Worcester, Massachusetts. Influenced by William Blake, Kunitz published his first poetry book in 1930, after earning an MA at Harvard University in 1927. He would spend the next 40 years lecturing around the country: Bennington College, Potsdam State Teachers College, and Columbia University, traveling around the world, residing in Bucks County in the late 1930s and 1950s. Throughout his life he received many awards/fellowships, notably his Pulitzer Prize for Selected Poems, and two-time Poetry Consultant to the Library of Congress (now termed "Poet Laureate"). Kunitz died at home from pneumonia in 2006.

Stanley J. Kunitz was born to Solomon Z. Kunitz and Yetta (Jasspon) Kunitz on July 29, 1905, in Worcester, Massachusetts. Kunitz experienced tragedy at a young age, his father having committed suicide a few weeks before his birth. This act would leave Kunitz's mother to denounce even the mere mention of her late husband and eventually became the subject of Kunitz's poem, "The Portrait," where he writes of his father's suicide and his mother's reaction:

She locked his name
in her deepest cabinet
and would not let him out,
though I could hear him thumping.
When I came down from the attic
with the pastel portrait in my hand
of a long-lipped stranger
with a brave moustache
and deep brown level eyes,
she ripped it into shreds
without a single word
and slapped me hard.
In my sixty-fourth year
I can feel my cheek
still burning.

In the fall of 1927, Kunitz moved to New York City to work for the H.W. Wilson Publishing Company, where he edited a plethora of books, including the house journal Wilson Library Bulletin, which he transformed into "something a great deal more stimulating and socially conscious than the house organ it was intended to be," according to Marie H??nault. He also edited nine biographical dictionaries, mostly with Howard Haycraft. In 1930, Kunitz would marry his first of three wives, Helen Pearce, and move to Wormwood Hill, Connecticut, where in the same year he would publish his first poetry book entitled Intellectual Things (1930). Kunitz would divorce Helen Pearce in 1937 and move to Lingan Green, Pennsylvania, marrying Eleanor Evans two years later. He would receive the Oscar Blumenthal Prize from Poetry Magazine in 1941.

Kunitz's stint in working with H.W. Wilson would come to a screeching halt, when in 1943 he was drafted into the United States Army, after being denied a request to be a conscientious objector. He became a noncommissioned officer in charge of information and education. In his second year in the Army, Kunitz published his second book of poetry, Passport to War (1944), relaying his thoughts and experiences. After serving a two-year term, the war ended and Kunitz was awarded the Guggenheim Memorial Fellowship and went on to reside in Santa Fe, New Mexico, for a year. In 1946, Kunitz moved back to the east coast teaching at Bennington College until 1949, giving birth to daughter Gretchen (1950), and teaching at Potsdam State Teachers College until 1950. While teaching at Potsdam, he directed a seminar in Creative Arts from 1949 until 1953, while simultaneously teaching at the New School for Social Research from 1950-1958. During this time, he continued co-editing books and spending year-long residencies at such universities as the University of Washington and Queens College.

Kunitz became a resident of Lumberville, Pennsylvania, in the late 1950s and was instrumental in founding the New Hope Workshop. The year 1958 became an eventful one for Kunitz because he divorced Eleanor Evans and married Elise Asher, received the Harriet Monroe Poetry Award, published his third book of poetry entitled Selected Poems(1958) (for which he won the Pulitzer Prize in 1959, surprisingly, after having struggled to find a publisher), and stunningly received the Fellowship Award from the Academy of American Poets. He was then appointed poet-in-residence at Brandeis University where he received the Ford Foundation grant. In 1959 he would receive the National Institute of Arts and Letters award.

In the 1960s onward, Kunitz would establish a residency in Manhattan, New York, and a summer residency in Provincetown, Massachusetts. In Manhattan, he co-founded Poets House, a literary reading place for poets and the general public, with the largest poetry archive in the United States. In Provincetown, he helped co-found the Fine Arts Work Center, which annually provides residencies and stipends to 16 "promising neophytes in the literary and visual arts." In 1961 he received an Honorary Doctor of Letters degree from Clark University before going on to lecture at Columbia University starting 1963. Four years later he would become a professor of writing in the School of Arts at Columbia University, and become one of 250 members of the National Institute of Arts and Letters. He would remain at Columbia until 1985. Prior to this departure Kunitz won the Brandeis University Medal of Achievement as well as a second Fellowship Award from the Academy of American Poets.

From the late 1960s and onward, Kunitz began to develop an interest in his Russian heritage, choosing not to follow his Jewish heritage. This led to him translating a number of eastern European poems and books, Poems of Anna Akhmatova, being perhaps the most notable. He also edited the Yale Series of Younger Poets from 1969-1977. In 1971, Kunitz published a fourth book of poetry, The Testing Tree (1971). 1974 and 1975 would become two notable years of Kunitz's life. He would publish a fifth poetry book, be appointed 23rd Consultant in Poetry to the Library of Congress (now termed Poet Laureate) and reappointed the year following, be elected to the 50-member American Academy of Arts and Letters, and publish a prose book. It is entitled A Kind of Order, A Kind of Folly: Essays and Conversations (1975). In this book he argues that he had never met a poet "who was not convinced of his uniqueness," and yet believed "some of us must be wrong, for clearly there are many more poets than there are voices," each being a "prisoner of style." He then leads the reader through his personal exploration of style. In 1979, his sixth poetry book was published, The Poems of Stanley Kunitz, 1928-1978, for which he received the Lenore Marshall Poetry Prize. From this book a section of Kunitz's Poem "The Quarrel" comments on his aging life:

Half-way I'm dead enough,
strayed from my own nature
and my fierce hold on life.
If I could cry, I'd cry,
but I'm too old to be
anybody's child.

Throughout the 1980s, Kunitz would continue to lecture and write. During this time an award was named after him. The city of Worcester celebrated his 80th birthday with a five-day poetry festival named after him and on his 100th birthday, Provincetown proclaimed it Poet Laureate Stanley Kunitz Day. In 1987 he received New York State's Walt Whitman Citation of Merit and the Bollingen Prize for Poetry and was named the "New York State Poet Laureate." He would become the Poet Laureate on the national level approximately 13 years later, at the age of 95.

Kunitz would go on to receive more awards for his poetry, including the National Medal of Arts presented by President Bill Clinton (1993) and his last award, the National book Award given for Passing Through: The Later Poems, New and Selected (both in 1995). He wrote his last poetry book, The Collected Poems, in 2000 at the age of 95. Sadly, his wife Elise Asher would die in 2004. With the help of Genine Lentine in 2005, at the age of 100, Kunitz co-authored The Wild Braid. Stanley Kunitz would die at his home in Manhattan on May 14, 2006, from pneumonia.