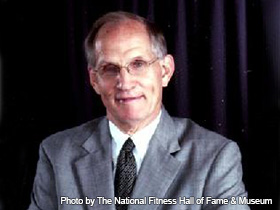 Charles T. Kuntzleman is the author of dozens of fitness books, including The Complete Book of Walking and .

Charles T. Kuntzleman was born in Bloomsburg on November 4, 1940. Kuntzleman was a professor of physical education;a coach offootball, track, lacrosse, and wrestling; and the co-host of the television show Fun and Fitness. He provided fitness instruction, suggestions, and analysis in books such as Activetics (1975), Rating the Exercises (1980), and his most famous book, The Complete Book of Walking (1978).

Charles T. Kuntzleman was born on November 4, 1940, in Bloomsburg, Pennsylvania, to Walter Allen and Phyllis Kuntzleman. He attended Muhlenberg College in Allentown, Pennsylvania, and continued his education at Temple University in Philadelphia, Pennsylvania. He married Carol Lee Emhardt in June of 1962, and after her death in 1973, Kuntzleman married fellow professor of health and physical education, Beth Ann McDonald in October of 1974. He has five children, Deborah Ann, John Walter, Thomas Scott, Rebecca Ann, and a stepdaughter, Lisa Kristin.

Kuntzleman's career began at his alma mater, Muhlenberg College, where he was the assistant professor of physical education and coached football, track, lacrosse, and wrestling. In 1968, he moved to the Lehigh County Community College, as the assistant professor of physical education and lecturer in anatomy and physiology. After focusing mainly on teaching, Kuntzleman became a consultant for Rodale Press and the national program director for the YMCA—Fitness Finders. In 1973, he became the co-host of the television show "Fun and Fitness."

While teaching and coaching, Kuntzleman began writing books providing fitness instruction, suggestion, and analysis. Just a few of his published titles include Activetics, Rating the Exercises, and his most famous book, The Complete Book of Walking. In this book, Kuntzleman described walking as "nature's way of helping people be their best — both physically and mentally." The book provides information about selecting proper shoes, what to do if minor pain occurs, how to handle weather conditions while waking, the benefits of walking tours, and walking as a family.

Kuntzleman's books also encompass a wide variety of topics that deal with general health and well-being; for example, his books Maximum Personal Energy, The Well Family Book, and Healthy Kids for Life. Healthy Kids for Life, which is also very popular, describes the importance of setting and meeting goals in order to keep children healthy. He gives simple advice to the common public stating, "Plan ahead. You'll need to recognize obstacles and plan how to get around them. Also, determine target dates for achieving your goals and design or develop a reward for having achieved them. Record all this on a chart." He strives to make fitness easy for the average, busy, person.

In addition to the books he has published, Kuntzleman has also written numerous articles and assessments for periodicals and scholarly journals, such as the renowned Journal of Physical Education, Recreation & Dance. He is also known for developing physical fitness programs for the national YMCA, and creating the "Living Well Corporate Fitness/Wellness Program for the Campbell Soup Company." Today, having retired from the University of Michigan, Kuntzleman is still conducting physical fitness workshops in the United States, Canada, Australia, Sweden, and Spain, and is the national director of the Fitness Finders Program. He currently lives in Spring Arbor, Michigan.

Kuntzleman's work has provided him with several prestigious awards, including the Jaycees-Metropolitan Life Insurance Physical Fitness Leadership Award for Pennsylvania in 1969 and 1985, the Healthy American Fitness Leader Award, and All-State Insurance and President's Council on Physical Fitness and Sports in 1985. He has also received grants from Hurst Foundation, W. K. Kellogg Foundation, and Simpson Foundation.