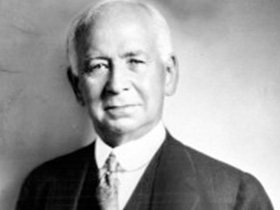 Dietrick Lamade, former president and publisher of Grit Magazine of Williamsport, was born on February 6, 1859 in Goelshausen, Germany. After immigrating to America, Lamade settled in Williamsport, Pennsylvania. It was here that a young Dietrick started a long career in the newspaper business. With the money Dietrick saved from previous newspaper jobs and with the help of a small group of investors, he was able to purchase the struggling Saturday edition of Williamsport's Daily Sun and Banner, called Grit. Dietrick used varying marketing ploys that enabled the paper to eventually become the most widely circulated newspaper in rural America by the middle of the 20th century.

Dietrick Lamade, former president and publisher of Grit Magazine of Williamsport, was born on February 6, 1859, in Goelshausen, Germany, to Johannes and Caroline Lamade. He was the fourth among nine children. In 1867 the Lamades made the journey to America settling in Williamsport, Pennsylvania. Shortly after their arrival, Lamade's father passed and the ten year old Dietrick was forced to abandon school and get a job. All nine children worked in some way to help support the family. By the time young he was ten years old, he was working in a mercantile establishment and by age thirteen, he was a printer's devil.

Apprenticed in a printing established sparked the young Dietrick's interest. He was remained involved with newspaper and continued climbing the ladder in the newspaper business. In 1872, Dietrick was apprenticed to a local printing office of a German weekly newspaper. It was here that Dietrick learned the ins and outs of the newspaper industry. He would later be employed at several English newspapers in Williamsport and at a time was employed as a printer for the United States Signal Station in that town. It was also during this time that Dietrick met his future wife. In 1881, he married Clara Anne Rhen of Williamsport. By 1883, Lamade's professional career was doing quite well. He positioned himself as the business manger of the weekly Williamsport Times until it merged with Grit, the Daily Sun and Banner's Saturday edition of the daily. Eventually, Lamade became a foreman in Williamsport's Daily Sun and Banner press room.

When Lamade caught wind that the Daily Sun and Banner was going to sell its struggling Grit division, he devised a plan to buy the weekly. He rounded up a group of investors to purchase Grit. He invested $150 in cash and borrowed $1,100 between himself and his partners to purchase the paper a plant. From the very beginning, Lamade was the publisher and president of the printing company.

Lamade made a few changes when first obtaining the paper. One of these was to move the paper to Sundays and another was to create the Grit Publishing Company. Lamade believed the magazine could succeed but knew he needed to introduce the paper to a larger audience in order to gain readership and money. Although the paper still struggled to turn a profit through the following year, Lamade devised a plan to turn the paper around. In 1885, Grit began promoting a Thanksgiving Day raffle in order to attract readers outside of Williamsport. Among the prizes offered were a rifle, piano, and a bedroom suite. To ensure that the paper would succeed in gaining an audience, Lamade traversed Pennsylvania by train to promote his weekly paper. When entering different towns, Lamade would hire selling agents and local correspondents. He even went as far to hire young boys to post circulars. Each of these circulars contained a coupon for the raffle. If someone was to combine a coupon from one of these circulars with three other coupons from Grit, then the bearer was entitled to a chance for the Thanksgiving Day raffle. Lamade's promotion and hard-work paid off because subscribers to the paper became regular readers. Attracted originally by the raffle, subscribers now had become attracted by the weekly articles. In less than a decade the paper's circulation rose to 53,000 throughout states east of the Mississippi.

In 1919, Dietrick's first wife passed away. The two had six children together including Howard J. Lamade, the only person to have served on both the first corporate board of directors of Little League Baseball and the first board of trustees of the Little League Foundation. In Williamsport, the land on which Lamade Stadium sits was donated by the Lamade family after Howard's death in 1958. Every summer, the stadium plays host to the Little League World Series. In 1922, Dietrick married Lourena Davidson Coryell.

Grit's influence kept growing throughout the first half of the twentieth century. Eventually it would become one of the first newspapers in America to feature color photographs and fictional supplements. At the paper's 50th anniversary in 1932, the paper reached approximately 400,000 people across the nation. Lamade retired from the paper a few years later in 1936.

On October 18, 1938, Dietrick Lamade passed away in the Williamsport Hospital after a brief bout with pneumonia. Four of his sons continued operations with the Grit Publishing Company. At the height of Grit's popularity in 1969, the weekly had a total circulation of 1.5 million. Dietrick Lamade's original mission statement for the Grit is still intact to this day, reading:

Always keep Grit from being pessimistic. Avoid printing those things which distort the minds of readers or make them feel at odds with the world. Avoid showing the wrong side of things, or making people feel discontented. Do nothing that will encourage fear, worry or temptation.... Wherever possible, suggest peace and good will toward men. Give our readers courage and strength for their daily tasks. Put happy thoughts, cheer and contentment into their hearts.