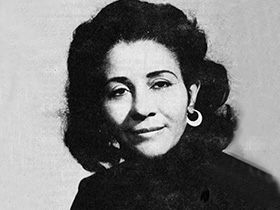 Pinkie Gordon Lane was born in Philadelphia in 1923. After graduating from Spelman College, she became the first African-American to attain a PhD from Louisiana State University. She began writing poetry influenced by the African-American literature of Gwendolyn Brooks. She taught at Southern University, working her way up to professor and eventually head of the English department. Lane has published five volumes of poetry: Wind Thoughts (1972), Mystic Female (1978), I Never Scream: New and Selected Poems (1985), Girl at the Window (1991), and Elegy for Etheridge (2000). Her highest honor was serving as Poet Laureate of Louisiana from 1989-1992, the first African-American to do so. Lane died in 2008.

Renowned African-American poet Pinkie Gordon Lane was born on January 13, 1923, in Philadelphia, Pennsylvania. Her parents, William Alexander Gordon and Inez Addie West Gordon, had three children before her, but Pinkie was the only one of the four to survive past infancy. To escape the loneliness of being an only child, Lane became an avid reader and was very active in her local Methodist church. She graduated from the Philadelphia School for Girls in 1940, and her father died that same year. For the next five years, Lane went to work in a sewing factory and saved money to go to college. Her mother died soon thereafter, and her loneliness in Philadelphia became the inspiration for much of her work. This is embodied in the poem "Wind Thoughts," where Lane writes:

I shall return one day
to the light that nurtured
my youth, the city that once
held my mother's smile.
But I will surround myself
with the color of wind-days
and speak to the stillness
that follows thought upon thought
and touches my eyes like the rain.

Lane and her husband then settled in Baton Rouge, Louisiana, where she worked in the now defunct Leland College in the English department before transferring to Southern University in 1959 where she would remain for 28 years. Lane gave birth to her only child, Gordon, in 1963.

Lane began writing fiction in 1956, but in 1960, during the hectic years working toward a PhDat Louisiana State University, a colleague gave her a copy of Gwendolyn Brooks's A Street in Bronzeville (1945). Brooks was the first contemporary black female poet that Lane had ever read, and Lane was inspired to abandon prose and write poetry as a result. Her first published poem, "This Treasured Book," appeared in the periodical Phylon: The Atlanta University Review of Race and Culture in the fall of 1961. The poem, which follows the form of a Shakespearean sonnet, expresses Lane's love of books.

Lane wrote and published prolifically from that point on. Her structure would soon shift to free verse. Feeling that any subject is suitable for a poem, Lane began to develop her own style; she began to make greater use of figurative language, relying more on imagery, careful word selection, and connotation. Lane used free verse and concrete images in her poetry, which categorized her as an imagist. Lane later drew influence from the metaphorical style of Anne Sexton, and began to write of internal experiences with subjects such as her family, nature, racism, and her profession.

In 1967, Lane became the first African-American to receive a PhDfrom Louisiana State University. Her husband died in 1970, and that year Lane began writing her first volume of poems, Wind Thoughts, which was published in 1972. The volume includes a section called "Poems to My Father," a series of six poems that depicts the difficulty of living with her father. The volume also includes poetry about her husband, working towards a degree, and dedications to fellow poets Sonia Sanchez and Gwendolyn Brooks. Her second volume of poetry, entitled The Mystic Female, was published in 1978 and was nominated for the Pulitzer Prize after receiving wide literary acclaim. It was a reflective volume that included the same six poems about her father from Wind Thoughts, as well as poems about more daily occurrences such as her experiences teaching at Southern University, where she became head of the English department until 1986. Lane went on to write three more volumes of poetry: I Never Scream: New and Selected Poems (1985), Girl at the Window (1991), and Elegy for Etheridge (2000), a volume dedicated to Etheridge Knight, another African-American poet.

Lane served as editor or contributing editor to anthologies and periodicals such as Poems by Blacks (1973), Discourses on Poetry (1972), Callaloo, and Black Scholar. She received numerous honors throughout her career but perhaps her greatest honor was becoming the first African-American poet laureate of Louisiana, a title she held from 1989 to 1992. Lane traveled globally, participating in numerous workshops, seminars, and poetry readings throughout the United States, Africa, the Virgin Islands, and Haiti.

The strength of Lane's poetry was her ability to put her inner-sensitivity and images into words that the reader can easily identify with. She converted pictures into words, and the result was a lush and sensual style that is appealing to the senses. Her work found a wide audience over the past several decades. Her poem "Lyric: I am Looking at Music," from Girl at the Window, was read aloud by actress Nia Long in the 1997 major motion picture, Love Jones.

After her retirement, she continued to participate in local festivals and poetry readings in Louisiana. Lane died on December 3, 2008 in Baton Rouge, LA at the age of 85.