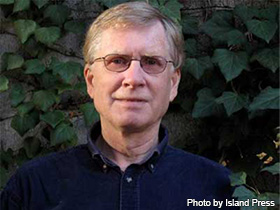 Architecture writer Philip Langdon was born in Greenville on January 6, 1947. He attended Allegheny College in Meadville, earning a bachelor's degree. He has held a number of posts with various newspapers and journals, as a reporter or editor, respectively.

Philip Langdon was born on January 6, 1947, in Greenville, Pennsylvania. He is the son of LaVerne and Betty Langdon, a newspaper editor and a church secretary respectively. After graduating from high school, Langdon moved north from Greenville to attend Allegheny College in Meadville. He earned his B.A. there in 1969. During his time at Allegheny, Langdon began his journalistic career as a reporter for the Franklin News-Herald in 1968. He later moved to the Meadville Tribune and then to the Harrisburg News-Patriot through 1971. That same year he married Maryann Dunkle. Langdon would earn a certificate in American Studies from Utah State University in 1973 and an M.A. in 1977. He wrote for the Buffalo Evening News from 1973 to 1982.

Langdon's service with the Buffalo Evening News marked the beginning of his professional development. He was given a professional journalism fellowship from the National Endowment for the Humanities in 1979. His interest in architecture was enhanced with an architectural fellowship from the New York State Council on the Arts. For more than two decades, Langdon's work focused on architecture. 1986's Orange Roofs, Golden Arches dealt with the architecture of restaurants in America, particularly that of McDonald's. Sam Hall Kaplan of the Los Angeles Times Book Review wrote that this was a "definitive history of a colorful, flavorful aspect of Americarsquo;s built environment" though he thought the style too cool.

He followed that book with one entitled American Houses, a book that garnered critical praise. 1989 saw the publication of Urban Excellence as well as a travel fellowship from the National Endowment for the Arts. During this same period, Langdon wrote a column for The Atlantic Monthly called "Home and Design" as well as writing feature articles for the New York Times, Landscape Architecture and other publications. Following the publication of A Better Place to Live: Reshaping the American Suburb, in which he argued that the current structure of the suburbs is isolating and has had negative effects on American society, Langdon became a senior editor of the journal Progressive Architecture. Following a two-year tenure there, Langdon moved to the American Enterprise as an associate editor and then to New Urban News.

Langdon lives in New Haven, Connecticut, writes free-lance articles for a number of magazines, and continues his editorial work for New Urban News.