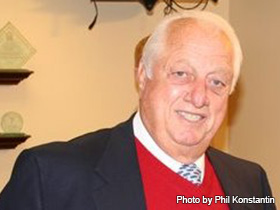 Born in Norristown, Pennsylvania, in 1927, Tommy Lasorda has been involved with Major League Baseball since 1954. His involvement includes pitching, managing, scouting, and directing. Lasorda primarily managed the Los Angeles Dodgers. He led the Dodgers to eight division titles and two World Championships in 21 seasons as manager. In 2000, Lasorda's coaching career reached its pinnacle as he lead the Sydney Olympic U.S. baseball team to a gold medal. Lasorda is a prominent public speaker and activist for the American Heart Association. Lasorda still has family living in Pennsylvania.

Born September 22, 1927, in Norristown, Pennsylvania, Thomas Charles Lasorda, better known as Tommy, has become one of the most renowned managers in Major League Baseball's more than 150 year history. His early baseball career began in 1948 as a left-handed pitcher for the Schenectady Blue Jays, a Canadian-American League team. While in the minor leagues, Lasorda clinched a league pennant for the Montreal Royals and made a name for himself as a minor league pitcher.

In May 1955, Lasorda saw his first major league start with the Dodgers organization, but his stay in the majors was short lived. Lasorda was sent back to the minors that same year. Lasorda spent the next several years with the Athletics and Yankees. In 1961, Lasorda became a scout for the Dodgers. This marked the end of his playing career and the beginning of his new career as a coach.

In 1965, Lasorda became a minor league manager for the Dodgers organization. He led his teams to five pennant victories, with only one record under .500. Lasorda then served several years as a coach under Walter Alston from 1973 to 1976. Alston was the manager of the Dodgers at the time. Upon Alston's retirement in September 1976, Tommy Lasorda was named manager of the Dodgers. In his first season as manager, Lasorda led the Dodgers to an unprecedented 17-3 start.

Lasorda went on to manage the Dodgers for 20 years until 1996. During his tenure, Lasorda led his teams to eight division titles, four National League pennants, and two World Championships. During this time he was voted Manager of the Year three times. He is known for his unique ability to find and develop talent as a coach. Lasorda fostered nine of the Dodgers' 16 players to Rookie of the Year status, more than any other manager in history. His enthusiasm for the game, fiery personality, and success as a manager gained him worldwide recognition. Lasorda compiled a 1,599-1,439 record with 61 post-season games managed. Lasorda ranks 13th in wins and 12th in Major League games managed at 3,038.

Lasorda underwent surgery on June 26, 1996, after suffering a mild heart attack. This would mark the end of his coaching career. On July 29, 1996, Lasorda announced his retirement, later assuming the role of team vice president.

On August 3, 1997, Tommy Lasorda was inducted into Baseball's Hall of Fame. That same month, the Dodgers organization retired his number (#2), the ninth number retired in Dodger franchise history. At the culmination of his career, Lasorda was named manager of the U.S. Olympic baseball team for the 2000 Sydney Olympic Games. He would lead the team to its first ever Olympic gold medal in baseball against the favored Cuban team.

While continuing to serve on the Dodgers executive board scouting and evaluating, Lasorda makes more than 100 speeches and appearances each year to various charities, youth organizations, military personnel and private organization. His speeches are generally motivational in nature, focusing on leadership and perseverance.

Most recently, as a way for television networks to maintain high ratings in the MLB postseason, several television executives chose Lasorda to appear in three commercials. In the commercials, "an exuberant, even bossy, Lasorda" coaxes all baseball fans, not just those whose teams are in the playoffs, to tune into the postseason action. Lasorda said about the commercials, "I wanted to do this for the commissioner and the good of baseball. People have been calling me from all over the country about these commercials. I didn't realize it would have this effect."

Lasorda is also a spokesperson for the American Heart Association. He has been presented with five honorary doctorate degrees from Pepperdine University, St. Thomas University, Cal State Long Beach, The University of Phoenix, and Concordia University. Lasorda currently resides in Los Angeles, California with his family.