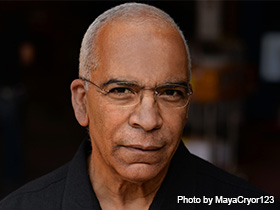 Lathan worked extensively as a director of television shows. He has been honored with many awards, including an Emmy Award.

Stanley Lathan started life in Philadelphia in 1945 and eventually matriculated at The Pennsylvania State University. At Penn State, Lathan developed his talents for writing and directing, which he parlayed into a successful career in both public television and commercial entertainment.

Stan Lathan was born into a working-class family in Philadelphia, Pennsylvania, on July 8, 1945. He was always pushed by his parents to develop good self-esteem and to strive hard to achieve goals. He was married to Broadway actress Eleanor McCoy, whom he divorced in 1977. He has one son, Tendaji, and daughters Sanaa, Liliane, and Arielle. As a child, Lathan was encouraged to go to college. His family worked together to provide the finances for his education. They served chicken dinners and the proceeds were put into Lathan's college fund. The profits from the dinner sales and scholarships enable him to enroll at The Pennsylvania State University. Lathan studied theater at Penn State and received his B.S. in 1967. While pursuing his degree, Lathan satisfied his need to direct. He liked creating and executing theatrical works, rather than focusing on acting. Lathan began his career in the public television industry, where he directed educational programming. He was director of Sesame Street, a fledgling television series, from 1971-1975. Prior to directing puppets, Lathan received acclaim for his production efforts for the PBS series Black Journal. He continues to direct and produce episodic television as either a side project or his only project for a variety of cable networks. Lathan has directed episodes of notable series such as Sanford and Son, Remington Steele, Miami Vice, Martin, and The Steve Harvey Show. Lathan received multiple awards for his directorial efforts in both the cinematic and television realms. He was honored with the Emmy Award for Magazine Programming in 1970 for Black Journal. Lathan received the Best Director award at the Jamaican Film Festival in 1974 for Save the Children. In 1978, Lathan was given the Eudora Welty Award for Outstanding Public Television Drama for The Trial of the Moke. He was frequently recognized throughout the 1980s for his various television and films works. Lathan was awarded the San Francisco International Film Festival's award for Best Feature for Television in 1985 for Go Tell It on the Mountain. Lathan is the executive producer and director the the HBO series Russell Simmons Presents Def Poetry, and is co-creator of Russell Simmons' Def Comedy Jam. He also developed the concept of Def Poetry Jam on Broadway, which won a Tony Award in 2003. He has been honored multiple times with the NAACP Image Awards as well as the National Association of Black Owned Broadcasters Award. He is currently on the Board of Visitors for the School of Communication as The Pennsylvania State University. Stan Lathan currently resides in Los Angeles, California.