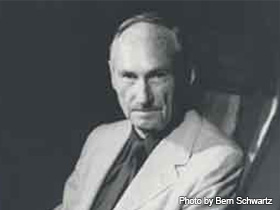 Renowned translator of the works of Homer, Richmond Lattimore taught at Bryn Mawr College for over thirty years.

Richmond Lattimore was born May 6, 1906, in Paotingfu, China. Educated at Dartmouth, Oxford, and the University of Illinois, Lattimore joined the faculty at Bryn Mawr in 1935. During World War II, Lattimore served in the U.S. Navy as a lieutenant. Upon his return from the war, Lattimore taught at the University of Chicago before becoming the Paul Shorey Professor of Greek at Bryn Mawr. Throughout his career, Lattimore taught at various universities and published widely as a scholar and poet, although he is best known for his work as a translator. His translations of Homer's Iliad (1951) and Odyssey (1965) are considered one of the finest English translations, and have been standard since their appearance. In 1984, Lattimore received an Academy of American Poets Fellowship. He died in February 1984.

In the Hebei Province of Paotingfu, China (now known as Baoding), Richmond Alexander Lattimore was born. Born on May 6, 1906, Richmond Lattimore was educated at home by his parents, David and Margaret (Barnes) Lattimore, both Americans. David brought his family to China in 1901, following China's Boxer Rebellion, which saw many foreigners killed over increased political and commercial presence in Northern China. He was a language professor for the Chinese government, and it appears that his profession paved the way not only for Richmond's own, but also for Richmond's brother, Owen. Owen Lattimore (1900-1989) was one of the United States' most distinguished Sinologists of the 20th century and director of The Johns Hopkins University's Page School of International Relations. In 1950, Joseph McCarthy's Communist hunt touched the Lattimore family when he indicted Owen for being one of the USSR's top spies; charges were dismissed after a valiant self-defense in the Senate, however, and Owenmay have come up with the term "McCarthyism," though many sources credit the political cartoonist, Herbert Block. Richmond's sister, Eleanor Frances Lattimore, is an author of children's literature and her best known are set in China, such as Little Pear: The Story of a Little Chinese Boy.

The Lattimore family returned to the United States in 1920 when David took a position at Dartmouth College. Richmond enrolled at Dartmouth and graduated in 1926. During his years in Hanover, Lattimore published a short story, "Gueth," in the College's publication, The Bema, in 1924. This same year he published his first poems and several reviews in The Bema, and Richmond went on to produce poems and reviews in Dartmouth's The Tower. In 1925 the young poet saw his poem "Assyrian Dance" appear in the Mexican poetry magazine Palms while the American periodical The Bookman published his poems "Fantasy" and "Which."

On the heels of his Dartmouth degree, and many more published poems, Lattimore attended Oxford University as a Rhodes Scholar. He graduated from Christ Church College in 1932, and in 1934 he earned his PhDfrom the University of Illinois. The same year he took his doctorate, Lattimore published "Portents and Prophecies in Connection with the Emperor Vespasian," his first of many academic publications, in The Classical Journal.

In 1935, Richmond Lattimore joined the faculty of Bryn Mawr College and began his life-long career in philology. While Lattimore never stopped composing poetry and stories, his contribution to classical studies and his triumphs in translation are his biggest claims to literary fame.

Lattimore followed his academic appointment at Bryn Mawr with several publications and translations, including "Herodotus and the Names of Egyptian Gods" in Classical Philology (1939) and his first book, developed out of his dissertation, Themes in Greek and Latin Epitaphs (U of Illinois P). Themes in Greek and Latin Epitaphs is several things: it is a fine chrestomathy of ancient tomb inscriptions, a showcase for Lattimore's deft translation ability, and a thorough study of these funerary epigrammata. On this monograph, James Hutton remarked, in a review for the American Journal of Philology, "[Lattimore] has examined the whole body of sepulchral inscriptions, both Greek and Latin, prose and verse, and hence his work stands on a broader foundation than any of its predecessors."

In 1943, Richmond Lattimore went to war as a lieutenant in the Navy. Upon his return from duty, he was a lecturer at the University of Chicago (1947) and Columbia University (1948), before returning to Bryn Mawr in 1948 as the Paul Shorey Professor of Greek. Lattimore continued to publish on a variety of Classical issues. Among these on-duty publications were translations of Homer, Aeschylus, and Virgil for a volume entitled War and the Poet, and an excellent comparative essay in Classical Philology on Sappho 2 and Catullus 51, which focused on the authenticity of the poems' endings.

In 1951, Richmond Lattimore's translation of The Iliad appeared. Lattimore's translation has become a standard text in the university curriculum, and it is often lauded as the finest available in English. Of Lattimore's Iliad, Frederick Combellack, in a 1953 review of the work in Classical Philology, remarked that it "displays a high degree of clarity and directness and achieves these ends without wholly sacrificing nobility. The tone is certainly not archaic or 'poetical' in any artificial sense, but it is yet elevated and dignified, as befits an old tale of ladies dead and lovely knights." To display the many merits of his translation, one would need to quote it variously and at length, but allow the rendering of Homer's simile for Achilles' pursuit of Hector in Iliad, Book 22 to represent Lattimore's accomplishment:

As when a hawk in the mountains who moves lightest of things flying makes his effortless swoop for a trembling dove, but she slips away from beneath and flies and he shrill screaming close after her plunges for her again and again, heart furious to take her, so Achilleus went straight for him in fury, but Hektor fled away under the Trojan wall and moved his knees rapidly.

Lattimore's translation of Homer's Odyssey has not garnered the same acclaim as his Iliad, but his Odyssey is still a major part of the English Homeric canon. In praising both his Iliad and Odyssey in The New York Review of Books, Hugh Lloyd-Jones informs his readers that "Lattimore was a genuine poet in his own right, and his poetic gifts combined with his excellent knowledge of Greek and his respect for the originals to produce translations of high quality," adding, "it seems to me that he has done better with nobility, as well as with accuracy, than any other modern verse translator."

On his Odyssey, however, George Steiner and Aminadav Dykman find that Lattimore pales next to other efforts. In their book, Homer in English, Steiner and Dykman observe that "[The Odyssey ] was not Lattimore's world. It is as if Fitzgerald's rival version...has lamed his confidence." Lattimore's Odyssey, however, remains very popular with students and instructors, and his Homerica has few detractors.

Lattimore has enjoyed enormous praise for his translations, which include contributions to the series he edited with David Greene, the University of Chicago Press' The Complete Greek Tragedies. Lattimore's translations of Aeschylus are widely held as excellent, and his efforts in this series were instrumental in making available in English all extant Greek tragedies. Lattimore's interest with the Attic stage was not limited to the University of Chicago's popular series. In 1957, as the Percy Turnbull Memorial Lecturer on Poetry at Johns Hopkins University, Lattimore delivered a set of lectures that became his The Poetry of Greek Tragedy (1958), a book that, according to Herbert Mursurillo in the American Journal of Philology, "[came] as a fresh sea-breeze over the parched landscape of classical scholarship." Mursurillo goes on to say that "not all scholars will, of course, agree with Lattimore's point of view, but everyone should admire his courage and critically examine what he has to say." Lattimore's methodology raises Mursurillo's eyebrows. In The Poetry of Greek Tragedy, Lattimore sets out to examine Greek drama's poetic qualities as an element sine qua non of the form, for, as he states in the introduction, "most critics might most of the time be discussing plays which were written in plain prose." This book and Lattimore's style of translation demonstrate his respect for the Greek originals and his love of all things classical.

Along with the translations and scholarly output, his poems kept coming. In 1963, Lattimore's poem "Claudia Goodbye" appeared in Best Poems of 1962, published for the Borestone Mountain Poetry Awards, and his book of poetry The Stride of Time was published in 1966. Lattimore retired in 1971, and in 1981 his anthology of poetry, Poems from Three Decades, was released.

Following Richmond Lattimore's retirement in April 1971, he continued to translate and compose, but it is his Biblical translation of 1979, The Four Gospels and the Revelation, that earned Lattimore more praise. Lattimore set out in this translation to allow the Greek original to speak clearly in his English version. That is, Lattimore felt, as he expresses in his preface, that he could remain "as close to the Greek as possible, not only for sense..., but in the belief that fidelity to the original word order and syntax may yield an English prose that to some extent reflects the style of the original." This is not an approach that will apply to the whole of the Greek, as his target language cannot accept certain linguistic conventions of the source language. Georg Luck reviewed Lattimore's Four Gospels... in The American Journal of Philology and applauded that Lattimore "has been successful to an astonishing degree in creating an English version that retains the flavor of the original. Without emphasis, without artifice, in plain speech, he captures the individual style of each of four or five writers (he believes that John the Evangelist did not write Revelation )." Frank Kermode was less impressed in The New York Review of Books, with an objection to Lattimore's methods and a cautious attitude toward the result: "the translation certainly has merits, but they lie neither in any startlingly modern view of the original, nor in literal fidelity." Regardless of praise or criticism, Richmond Lattimore's The Four Gospels..., which was accompanied in 1982 by his translation The New Testament: Acts and Epistles, demonstrates Lattimore's commitment to and admiration for the ancient Mediterranean in all its forms.