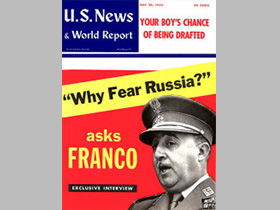 On Christmas Day, 1888, in Philadelphia, Pennsylvania, David Lawrence entered this world with strong aptitude and fervor. Throughout his lifetime he excelled in academics, journalism, relationships, and entrepreneurship. Lawrence graduated from Princeton University with widespread recognition for his outstanding efforts and talents as a student journalist. Throughout his life he built strong ties with multiple political figures, the most influential being that of Woodrow Wilson. He is known best for his founding of U.S. News and World Report and was awarded the Presidential Medal of Freedom in 1970. Having defined knowledge of the literary and political world for more than 70 years, David Lawrence died on February 11, 1973.

David Lawrence, born on December 25, 1888, in Philadelphia, Pennsylvania, would become one of America's most highly respected and widely recognized journalists. Shortly after his birth, his family moved to Buffalo, New York. His father, Harris Lawrence, was an immigrant tailor married to Lawrence's mother, Dora Lawrence. During his childhood and teenage years in Buffalo, New York, Lawrence is said to have read The Congressional Record, as preparation for a grade school debate. This is thought to have been the beginning of his interests in journalism, government, and politics. He is quoted years later in a biography by Arthur Krock, Unforgettable David Lawrence, recollecting his experience reading this transcript, "Long after my debate, I used to go to the library to read the Record. I just couldn't imagine anything finer than to be able some day to see those men in debate." During this time Lawrence began his career in journalism working as an entry level photographer and reporter for the Buffalo Express.

His next stepping stone on the path of success and persistence was his experience as a student at Princeton University. While studying journalism at this prestigious institution, Lawrence free-lanced for 17 newspapers. One of his first breaking stories was that of the death of Grover Cleveland in 1908. While at Princeton, he worked for the Associate Press as its Washington correspondent. A strong relationship formed between Lawrence and the man whom he recognized at the time as Professor Woodrow Wilson. Wilson was a professor of political science at Princeton during the time that Lawrence completed his studies. This relationship would last for years to come.

Lawrence later authored The True Story of Woodrow Wilson in which he informs the reader of Wilson's political, rational, interpersonal and relational style, involvement in the war, affiliations, post-presidency, and various other topics. As a testament to Lawrence's ability to beautifully place words in construction of a cohesive and prevalent thought, as well as to his personal knowledge of Woodrow Wilson, he includes the following in his book, "In all history, perhaps, there is no statesman who was as deeply influenced or as quickly stimulated in intellectual vigor by an atmosphere of feminine brilliance." Later in the book Lawrence writes, "As a husband and father, as a chum of his college classmates, as a host at family reunions, Woodrow Wilson was full of human qualities. As a trustee of the public interest, as a crusader for large policies of state, he knew neither friendship nor compassion — he was as stern as he was inflexible." These assertions present Woodrow Wilson as the powerful leader we all know him to have been, in addition to shedding light onto his relational personality. Lawrence was able to present an eloquent opinion in recollecting his friendship with this influential, historical figure.

Upon his graduation in 1910, Lawrence moved to Washington, D.C. where he worked for the Associated Press. In Arthur Krock's biography, Lawrence is described with the following words, "His integrity, and the ability to listen, opened up many a reluctant source to him." While at the Associated Press, Lawrence released one of his most famous reports informing the public of the leave of secretary of state William Jennings Bryan. In 1916, he left the Associated Press to join the New York Evening Post where he developed his journalism skills to target, reveal, and explain prevalent national issues surrounding the public, international affairs, Mexico, and the war in Europe. It was this same year that he met Ellanor Campbell Hayes at a White House reception. On July 17, 1918, the couple married and in the future would have four children: David, Mark, Nancy, and Etienne.

After reporting on the Versailles Peace Conference in 1919, Lawrence pursued his next endeavor of creating the Consolidated Press Association. He was the first to send his column by wire rather than mail and is recognized as "one of the nation's first syndicated columnists," as quoted by Contemporary Authors. This entrepreneurial endeavor led to Lawrence's next accomplishment of forming his own newspaper in 1926, the United States Daily. This newspaper reported the activities of the federal government and on May 17, 1933 would become a 16-page paper called the United States News. Following the Second World War, in an effort to address international issues as well, Lawrence created a weekly release of international news called the World Report in 1946. During the time of founding these magazines, he did not rest during any spare moment and entered into the world of radio broadcasts as one of the first journalists to do so. Much like many of his experimental career choices, Lawrence was once again very successful as a broadcaster developing a regular air show called Our Government with NBC (National Broadcasting Network).

Lawrence is best known for the merger of his two magazines into U.S. News and World Report, still in mass circulation today. As editor of this magazine, he released its first issue in 1948, and in doing so, created a legacy. After surviving a heart attack in 1968, he was recognized for his literary success with the Presidential Medal of Freedom in 1970. This recognition was given to him one year after the death of his wife, Ellanor Lawrence (1969). In his home in Sarasota, Florida, Lawrence passed away June 13, 1973. He was able to have seen the number of subscribers to his magazine reach 1.94 billion.

The U.S. News and World Report is a thriving source for local, national, and international news. Covering areas such as health, finances, education, politics, as well as other topics, this magazine is a valuable source for many areas of popularity and concern. Over the years this publication has adapted with the times. A 1968 edition presents expos??s on subjects such as Vietnam, business growth, impact of watching the war via television news, the draft, rising costs of attending college, and rising trends of African-American leadership. A subsequent 1981 edition focuses on world and US business, farming, taxes, Chinese capitalism, and oil/energy. A more recent 2008 edition reports on education, health care, Obama's campaign, Aids, and other current topics. It is clear to see that this magazine seeks to discuss and reveal the most prevalent topics of the past, present, and future.

In Arthur Krock's biography, Lawrence's personality comes to life as he is quoted in saying, "The basic ingredient that makes possible a successful government and a satisfying life for the citizenry is fundamental honesty. The individual is entitled to freedom but not to license. When government becomes corrupt, the people suffer. They discover sooner or later, however, that they themselves must rebuild the edifice." As another indication of his character, he is said to have recommended that one of his editors not read his editorial to avoid being influenced by his opinions. This is a clear demonstration of the caliber of integrity and strength inherent to David Lawrence who changed the world during his time, and continues to inform the public through his creations.