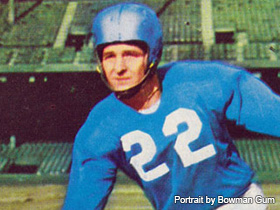 Hall of Fame quarterback Bobby Layne played for the Steelers from 1958 to 1963.

Born in Santa Anna, Texas, in 1926, Robert Layne started his outstanding football career at the University of Texas. After graduating in 1948 with a degree in Physical Education, Layne was originally drafted by the Pittsburgh Steelers. After being picked up by the Detroit Lions in 1950, he led his team to three NFL National Championships. Within five years of retiring in 1962, Layne was elected to the Texas Hall of Fame, the Longhorn Hall of Honor and the Pro Football Hall of Fame. Layne died of cardiac arrest in 1986.

Robert Lawrence Layne was born on December 19, 1926, in Santa Anna, Texas. At a young age, Layne and his family moved to Fort Worth, Texas, where he attended elementary and junior high school. After his father died when he was six-years-old, Layne's mother sent him to live with uncle and aunt. He attended Highland Parks High School, where he started his legendary football career. During his senior year, he led his team to the state playoffs and was named to the All-State team. After high school, he continued his education and football career at the University of Texas at Austin. He led his team to win the Cotton Bowl in 1946 and the Sugar Bowl in 1948. During all four years of his college career, Layne was an All-SWC selection each year. After his senior year, he was the consensus choice for All-American Quarterback. Also during college, he married Carol Kruger in 1946. He graduated in 1948 from Texas with a degree in Physical Education.

Layne not only stood out as a quarterback at Texas, but was also excelled in baseball. After his graduation, he briefly joined a Class-C Lubbock Hubbers. Shortly, however, he decided he would rather play professional football. He was first drafted by the Pittsburgh Steelers, but was immediately traded to the Chicago Bears in 1948. By the following season he was already traded to another team, the New York Bulldogs. The Detroit Lions picked him up before the 1950 season started.He would remain with the Lions for the next eight seasons.

While playing at Detroit, he led his team to the NFL championships in 1952, 1953, and 1957. In addition, Layne also led his team to four Western Division titles and a pair of second-places finishes.He was named the All-Pro Quarterback in 1954 when he led the Lions to the title game. In 1958, he was abruptly traded to the Pittsburgh Steelers, playing again for coach Buddy Parker. Although he spent five seasons with the Steelers, he never made it back to the championship. During his last year in the NFL, Layne published his autobiography Always on Sunday.

Layne retired before the 1963 season. He left the NFL holding records for touchdowns, yards, interceptions, completions and passing attempts. Within five years of retiring from professional football, Layne was elected to the Texas Hall of Fame, the Longhorn Hall of Honor and the Pro Football Hall of Fame. For a short time, Layne served as an assistant coach for both the Pittsburgh Steelers and the St. Louis Cardinals. After being denied the head coaching position for Texas Tech University, he spent the rest of his professional career as a businessman in Texas with his wife, Carol and two sons, Rob and Alan. His business ventures included farms, bowling alleys, real estate, oil, and the stock market. After being hospitalized for internal bleeding, Layne died of cardiac arrest on December 1, 1986, at the age of 59.