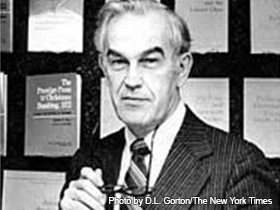 Political scientist Ernest Lefever was born in York on November 12, 1919. He held a number of academic posts as well asworked with several non-governmental organizations. His breakthrough book was Ethics and Public Policy, published in 1957.

Ernest W. Lefever was born November 12, 1919 in York, Pennsylvania. He was the son of Calvin Ashby Lefever and Katie Lefever. Lefever married Margaret Briggs in 1951, with whom he had two sons, David and Bryce. Lefever was a member of several political associations, including the American Political Science Association, and was a member of several ethical associations, such as the American Society of Christian Ethics.

In 1942, Lefever received his ABfrom Elizabethtown College. He went to Yale University to complete a BDin 1945, and a PhDin 1956. From 1952 to 1954, Lefever was the international affairs specialist for the National Council of Churches in New York. The following year he was a research associate in the School of Advanced International Studies at Johns Hopkins University. From 1955 to 1956, Lefever was also a faculty member at the University of Maryland at College Park. A year later, he became a researcher and acting chief of the Foreign Affairs Division of the Library of Congress. Lefever also served as the foreign relations specialist for Senator Hubert H. Humphrey from 1957 to 1959, and later became a member of President John F. Kennedy's Task Force on Arms Control, in 1961. From 1964 to 1976 Lefever was a professorial lecturer in international relations and faculty associate of the Center for Strategic and International Studies at Georgetown University. He was also an adjunct professor of international politics at American University and a lecturer at Salzburg Seminar in American studies, in 1964. Between 1958 and 1964, Lefever was a consultant for the Council on Religion and International Affairs, for the International Affairs Program of Ford Foundation, and for the Institute for Defense Analyses.

In 1957, Lefever published his first book, Ethics and United States Foreign Policy. He would go on to write several other books on current events that were occurring in the international political realm, such as Crisis in the Congo (1965), Spear and Scepter: Army, Police, and Politics in Tropical Africa (1970), and Nuclear Arms in the Third World (1979).

Lefever was also a contributor to chapters of other books, articles, book reviews, and periodicals such as the New York Times, the Wall Street Journal, the Washington Post, and the Washington Star. He was a member of the editorial boards for World Affairs and Policy Review as well.

Lefever was awarded the Professional Achievement Award from Elizabethtown College in 1967 and was named a fellow of Johns Hopkins University Society Scholars in 1971. Five years later, Lefever founded the Ethics and Public Policy Center (EPPC) of which he also served as the first president. In 2001, he was editing a variety of studies published by the Ethics and Public Policy Center and living in Chevy Chase, MD.