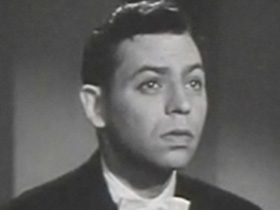 Pianist and composer Oscar Levant was born in Pittsburgh.

Born in 1906 to Orthodox Jewish parents from Russia, Levant was raised in a musical family. He began studying piano composition at a young age and, after moving to Hollywood, California, composed music for many movies. Levant was married twice, first to actress Barbara Woodell, and later to actress and singer June Gale, with whom he had three children, Marcia, Lorna, and Amanda. Levant worked in radio and television for many years before he died of a heart attack in Beverly Hills, California, in 1972.

The youngest of four sons, Oscar Levant was born in Pittsburgh, Pennsylvania on December 27, 1906, to Orthodox Jewish parents Annie and Max Levant. From an early age it was clear that Levant had a promising future in music. By the time he was seven years old, Levant had mastered an impressive repertoire of compositions by esteemed composers such as Bach, Beethoven, Chopin, and Schumann. At age twelve, Levant was used to performing public recitals and had caught the attention of his high school music teacher who afforded him special instruction. It was at this age that Levant was introduced to the music of George Gershwin, a man who would later become one of Levant's most influential friends and collaborators. In 1921, when Levant's father passed away, his mother took their family to New York City when he was only fifteen years old. A year later, Levant dropped out of school to pursue his love of the performing arts on his own terms.

Living in New York at the time of the Great Depression, Levant quickly found work performing at various nightclubs and speakeasies. Levant became a regular performer at some of the more popular clubs and soon gained the attention of the local media. He then attracted the attention of his childhood idol, George Gershwin. Levant and Gershwin established a friendship built on competitiveness, one that Levant would have won had he not been insecure about his inferior musical abilities. However, it was from this competition that their mutual respect derived. Levant unsuccessfully attempted to step outside of Gershwin's shadow, which ultimately contributed to his frustration and fueled his insecurities. When Gershwin died in 1937, Levant began reinterpreting and performing Gershwin's music. After being recognized as Gershwin's best interpreter, Levant became one of America's highest paid musicians. Levant found great success as a composer, pianist, actor, author, and arranger. In New York he studied piano and composition under the established composer Sigismond Stojowski from 1935 to 1937 and later under composer Arnold Schoenberg. With their guidance, Levant composed some of his most famous pieces including, Blame it on my Youth, Lady Play Your Mandalin, and Sonatina: First Movement: Con ritmo. Levant also performed as a soloist with the New York Philharmonic and the Cleveland, Pittsburgh, Philadelphia, Rochester, Los Angeles, and Montreal orchestras. Levant also spent time in Hollywood, California where he made a living composing music for various musicals and motion pictures. He appeared in thirteen films including An American in Paris and The Band Wagon. Levant also wrote three autobiographies titled, A Smattering of Ignorance (1940), Memoirs of an Amnesiac (1965), and The Unimportance of Being Oscar (1968).

Levant is perhaps most famous for his role as a syndicated talk show host. He began his career as a radio host as the "Music Expert" on the radio show Information Please. His wit and attitude gained him national recognition. In the late 1940's, Levant became a regular on NBC's radio show Kraft Music Hall with the famous Al Jolson. (Both hosts later appeared in a movie tribute to George Gershwin called Rhapsody in Blue.) After suffering a heart attack in 1950, Levant developed an addiction to the painkiller Demerol. Audiences tuned in to listen to Levant openly discuss his pill addiction and his subsequent neurosis; something that had plagued him for many years. According to one biographer, Levant was "the first public dysfunctional celebrity ... that shocked and also amused because Oscar was funny when he talked about ... group therapy.

Despite his popularity, because his programs were recorded live, Levant's antics often got him into trouble. According to a Los Angeles Times article, "On any night, [Levant] might walk off in the middle of the program (if he had even bothered to show up). Or smash a sponsor's product on the stage. Or direct insults at spectators. Arguments with wives, on and off the air, occasionally broke out - and only occasionally featured firearms." As a result, Levant was fired from and hired to many different programs during this time. In 1958, Levant finally starred in his own television program, The Oscar Levant Show, on the KCOP-TV network in Los Angeles. The show only ran for two years, from 1958 to 1960, before it was cancelled.

Oscar Levant was married twice during his life, first to actress Barbara Woodell on January 5, 1932, and later to actress and singer June Gale On December 1, 1939. Levant and Gale had three children during their marriage, Marcia, Lorna, and Amanda. Unfortunately, because of the media and Levant's stardom, their family matters would often become public knowledge.

Despite any hard times the two may have endured together, Gale stayed by Levant's side until his death on August 14th, 1972. Oscar Levant died in Beverly Hills, California from a second heart attack at the age of 65. He is buried in Westwood Village Memorial Park Cemetery in Los Angeles, California.

Photo Credit: "Screenshot of Oscar Levant from the trailer for the film Rhapsody in Blue.." 1945. Photograph. Licensed under Public Domain. Cropped to 4x3. Source: Wikimedia.