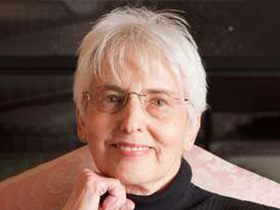 Constance Levy received the 2003 Lee Bennett Hopkins Award of the Pennsylvania Center for the Book.

Constance Levy was born in St. Louis, Missouri on May 8, 1931. She is well-known for her children's books of poetry such as A Crack in the Clouds and Other Poems (1998) and The Story of Red Rubber Ball (2004). Her books have received numerous awards. Splash!: Poems of Our Watery World (2002) won the 2003 Lee Bennett Hopkins Award of the Pennsylvania Center for the Book. Levy has worked as an elementary school teacher, children's poet, and an instructor of children's literature.

Constance Levy was born on May 8, 1931, and raised in St. Louis, Missouri, by her parents, Samuel and Esther Kling, a clothing store businessman and a homemaker. In an interview, she fondly recalled her childhood years, filled with writing poetry, and considered herself to be observant, nature-oriented, and an "outdoors" kind of child. After graduating from Washington University in St. Louis (BA, 1952), she knew that she was ultimately going to become a teacher; she would be surrounded by children and encourage them to expand their minds through poetry. In 1953, she married Monroe D. Levy, a physicist and retired president of a manufacturing company. Together, Constance and Monroe had five children who, collectively, gave them 13 grandchildren.

The idea to write for children first struck Levy when she came across a children's book by Myra Livingston while her eldest son was attending nursery school. At the time, Levy had been a Reading Specialist but she did not feel that it "accomplished" much in terms of personal growth or social value. She began to educate herself on the subject of children's poetry through reading a variety of poems geared towards children. Levy even brought the "best poems" into the local schools, which did not teach any poetry at all. When she first began writing professionally, many of her poems were initially rejected, though eventually published, by various magazines. Frustrated, Levy decided to return to the St. Louis campus of Washington University and graduated with a Master's Degree in Education in 1974.

Constance Levy then worked, as she predicted, as an elementary school teacher while pushing forward with writing children's poetry. She proudly devoted seven years to the Missouri Arts Council's "Writers in the Schools" program, where she would teach both children and teachers. Using her own experiences and nature for inspiration, Levy wrote several children's books, including her first book of poetry, I'm Going to Pet a Worm Today (1991), as well as A Tree Place and Other Poems (1994), and When Whales Exhale and Other Poems (1996). The Story of Red Rubber Ball, her most recent book, was a 2004 Junior Library Guild Selection. Her novel, Splash!: Poems of Our Watery World (2002) won the Lee Bennett Hopkins Award of the Pennsylvania Center for the Book in 2003. This award, established in 1993, is the first of its kind in the nation and is given annually to an American children's poet or anthologist for a book published within the past year.

Her poem "Plink by Plink," from Splash, was also selected for publication by the Public Poetry Project of the Pennsylvania Center for the Book in 2003.

Levy has traveled to schools and colleges as a guest speaker and lecturer. Here she introduces others to poetry and even hears about her positive influence on other writers. She participates as a workshop leader in children's literature festivals and in 1998, encouraged St. Louis to join other Missouri cities in holding children's book festivals.

Constance Levy currently resides in St. Louis, Missouri, and is very close to her family. However, she recently mourned the death of her husband, Monroe. She battled the sadness of losing a loved one by writing and observing nature for inspiration. Because of her Jewish heritage, Levy also became involved in the Anti-Defamation League, a Jewish organization that combats anti-Semitism and bigotry. She continues to "spread poetry," especially if she can teach it to children, by visiting local schools, and she remains active by exercising, taking walks, cooking, and entertaining her family.