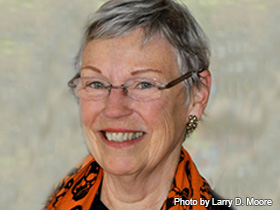 Betsy Lewin, born in Clearfield, Pennsylvania on May 12,1937, is a Caldecott Honor-winning children's fiction illustrator and writer whose love of the natural world is manifested in her work. Most of her books, and those she has illustrated for others, feature whimsical animal characters. Lewin has seen tremendous success through her collaboration with children's author Doreen Cronin; all three of their collaborative books have made The New York Times Best Sellers list. Read more here.

Betsy Lewin was born Betsy Reilly on May 12, 1937, in Clearfield, Pennsylvania. The rural surroundings of Clearfield gave the young Lewin countless opportunities to exercise her imagination. Her feet were about as free as her mind, as she played often in the woods near her home. Lewin always had her mind set on becoming an artist. She was influenced, as so many are, by her mother: Winifred Dowler was a kindergarten teacher and read to Lewin and her brother every night. Lewin's father, John K. Reilly, worked in insurance sales.

Throughout her youth, Lewin drew on anything she could find—napkins, paper bags, and even the sidewalk. Not surprisingly, she went on to study illustration at the Pratt Institute of Art in New York City, where she received her Bachelor of Fine Arts in 1959. Prior to attending Pratt, Lewin had no formal artistic training of any kind.

After graduating, Lewin found work as an assistant art director at a greeting-card company in New York. She began freelancing for other card companies, and before long, was writing and illustrating stories for children's magazines—a labor closer to her heart than card illustration. One day, an editor at the publishing house Dodd, Mead & Company came to Lewin, asking her to expand one of her stories into a picture book. Lewin jumped at the chance, and Cat Count was born. Lewin fell in love with picture books from book one and has been illustrating them since.

Most of Lewin's art is drawn in pen or brush with watercolor washes and has appeared in other authors' books more than her own. She has collaborated with such respected children's authors as Arnold Adoff and Russell Hoban.

In 1963, Lewin married kindred spirit Ted B. Lewin, a fellow writer and illustrator. Since their marriage, Lewin and her husband have traveled to wildernesses in Africa, Australia, Brazil, and the Galapagos Islands—all to describe, through art and words, the colorful nature and wildlife they had witnessed. Her title Chubbo's Pool, for instance, is about a selfish hippo she encountered in Botswana's Okavango Delta. What's the Matter, Habibi? was inspired by a camel driver she met in Egypt.

Click, Clack, Moo: Cows That Type was Lewin's most successful undertaking in terms of recognition. Written by Doreen Cronin and illustrated by Lewin, it won the highly distinguished Caldecott Medal in 2000. The story is about a group of cows who come by an old typewriter in their barn. After learning how to type, the cows leave notes for the farmer petitioning him for electric blankets to keep them warm at night. The farmer refuses, and the cows go on strike.

In addition to winning the Caldecott, Lewin also made the American Booksellers Pick of the List in 1990 for Araminta's Paintbox, written by Karen Ackerman, and again in 1993 for Ho! Ho! Ho! The Complete Book of Christmas Words, written by Lynda Graham Barber. In 1994, she won Children's Choice for Yo! Hungry Wolf: A Nursery Rap, written by David Vozar, and Somebody Catch My Homework, written by David L. Harrison. Booby Hatch made the Best Books list of the School Library Journal in 1995.

Today, Lewin and her husband reside in a brownstone rowhouse in Brooklyn, New York, surrounded by two pet cats and mementos from their travels around the globe. The active writing team still goes up and down the world to gather material for their books.