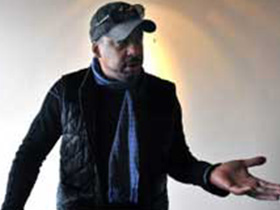 Artist and Illustrator E.B. Lewis is a Philadelphia native.

Earl Bradley Lewis, born on December 16, 1956, is an artist and children's book illustrator originating from northeast Philadelphia. A graduate of the Temple University Tyler School of Art, Lewis began his work as an illustrator after establishing careers in teaching and freelance artwork. His critically-acclaimed illustrations have won prestigious awards such as the Caldecott Honor and Coretta Scott King Award. He currently teaches at the University of the Arts in Philadelphia as an instructor of illustration, and he is also a member of the Society of Illustrators in New York City. He lives in New Jersey with his family and continues to illustrate children's books and teach.

Born on December 16, 1956, in Philadelphia, Pennsylvania, Earl Bradley Lewis was the first of Charles and Earline Lewis's five children. A self-described class clown, he knew at a young age that he wanted to be an artist—not surprising, considering three of his close relatives held art-related professions. His father was an art handler at the Philadelphia Museum of Art; uncle Lyles Smith taught at the Philadelphia College of Art; and, most importantly, uncle Bradley Smith was a sculptor who directed art classes at Temple University. Uncle Bradley was Lewis's role model, taking the time to drive his nephew to the Art League classes he taught on Saturday mornings at the university. Lewis studied at the Art League until enrolling in Temple's Tyler School of Art in 1975.

At Tyler, Lewis broadened his art experience by majoring in graphic design and illustration, as well as art education. He was able to explore a variety of mediums, and he found that he favored working in watercolor. Lewis graduated in 1979, but did not immediately enter a career in children's book illustration, the area in which he is most renowned. Rather, he began teaching and freelancing in graphic design and painting. Success was not far away—a body of work he created between 1985 and 1986 was featured in a downtown Philadelphia gallery, reaping his first praise from critics. Soon after, the prestigious Richard Rosenfeld Gallery in Philadelphia chose to exhibit his work, as it continues to today.

Lewis received his first offer to illustrate a children's book in the early nineties, which is a job he at first declined, citing his profession as a fine artist. However, agent Jeff Dwyer urged him on, telling Lewis to look up the works of already distinguished illustrators Chris Van Allsburg and Jerry Pinkney. Lewis almost immediately changed his mind, and in 1993, his art appeared in Jane Kurtz's Fire on the Mountain. The story is Kurtz's retelling of an Ethiopian folktale about a courageous brother-and-sister team who shrewdly outwit a dishonest rich man. Jos N. Holman, of the School Library Journal, wrote that Lewis' watercolors "captur[e]... the warmth and simplicity of the tale," and "bring the story to life, complementing the emotion, expression, and character of the printed words."

To keep his careers in illustration and fine art separate, Lewis started using two names: for fine art, Earl Lewis, and for illustrations, E.B. Lewis. "When I sit down as a painter, I'm thinking how I'm going to solve the philosophical problem that I set up for myself," Lewis told Jaqueline Weiss for the series Profiles in Literature. "But as an illustrator, I'm thinking about how I can best invade this piece of text."

Since 1993, Lewis's illustrations have especially focused on books dealing with issues tough to relate to children, such as death, loss and love, as he has explained, with many stories—but certainly not all—set in the African-American community. "There's been a major void in children's books for a long time of African-American subjects," he told Greg Johnson of the Philadelphia Tribune. "Not only African-American but Asian, Latino and Native American, so we're filling that void. Now the children of those descents are able to pick up a book and see themselves reflected in these stories, which is a positive thing."

One such book is a Talkin' About Bessie: The Story of Aviator Elizabeth Coleman, about the first licensed African-American woman pilot, written by Nikki Grimes. For his paintings in the book, Lewis won the 2003 Coretta Scott King illustrator award, which is an award that given to African-American authors and illustrators of outstanding books for children and young adults. In Booklist, columnist Carolyn Phelan said "Lewis' paintings... reflect the spirit of the verse through telling details and sensitive, impressionistic portrayals," while New York Times reviewer Ellen Feldman called his work "painterly illustrations" that "deepen" the story. Previously, three more of Lewis's works were named Coretta Scott King illustration honor books: The Bat Boy and His Violin, written by Gavin Curtis (1999); My Rows and Piles of Coins, written by Tololwa M. Mollel (2000); and Virgie Goes to School with Us Boys, written by Elizabeth Fitzgerald Howard (2001).

Other awards Lewis has received include: Jacqueline Woodson's Coming on Home Soon being named a 2005 Caldecott Honor Book, Notable Book selections by the American Library Association in 1996 and 2002 for Down the Road, by Alice Schertle, and The Other Side, also by Woodson. In 2005, the Pennsylvania School Librarians Association named Lewis their Outstanding Pennsylvania Illustrator of the year.

The artist, who grew up in the Frankford section of northeast Philadelphia, also likes to visit elementary schools to talk to young students about his life in art. When he visits schools in low-income areas, noted Kevin Riordan of the Courier-Post, Lewis feels it is "important for students of modest backgrounds to see what's possible." Lewis told Riordan that with children in those areas, "Hopelessness is kind of setting in. What I'm trying to instill in them is that it isn't hopeless. [As a child], I heard this too... and look what happened to me."

Lewis continues to illustrate books to this day. He has recently illustrated is Langston Hughes's poem, "The Negro Speaks of Rivers." The description of the illustrated poem on his website states: "Artist E.B. Lewis acts as interpreter and visionary, using watercolor to pay tribute to Hughes's timeless poem, a poem that every child deserves to know." Also, Lewis has illustrated two books that were published recently in 2009. The first is Geoffrey Norman's Stars Above Us, and the second is Joesph Slate's I Want to be Free. He describes the process of how he decides what books he wants to illustrate:I like the strong human interest stories, he wrote, the kind that evoke emotion ... stories that touch the heart.

Currently, in addition to his continuing work in freelance painting and illustrating, and being a father to sons Aaron and Joshua, Lewis is a professor teaching illustration at the University of the Arts in Philadelphia. "I have two passions—one of education and one of art—and I can't think of a better way to make that marriage," he has said. "A picture book because you have the art, and then the literature—it's the perfect marriage.