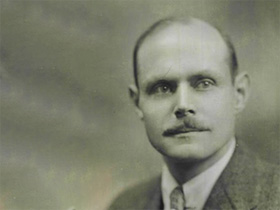 After being born and raised in Philadelphia, Frederick (Fred) Lieb worked for the Norfolk and Western Railroad when he began to writer biographies for Baseball magazine. This led to a job with the Philadelphia News Bureau and in 1911, he moved to New York City. He worked for the New Sun, Evening Telegraph, and Post for the next 20 years. He went on to write 11 books and covered over 8,000 MLB games. He won the J.G. Taylor Spink Award for lifetime achievement in 1972 and wrote for the St. Petersburg Times until his death in 1980.

Baseball journalist and historian Frederick (Fred) Lieb was born on March 5, 1888, in Philadelphia to George August Lieb and Theresa Zigler. Lieb credited his first introduction of big league baseball to when the scorecard boy would come through his South Philadelphia neighborhood in the mid-1890s. The kids in the neighborhood of South 21st Street, barely able to read, came to recognize this bearer of all-important news, riding on his bicycle.

His parents got him a small printing press for Christmas one year because of his love of writing. When he was fifteen, Lieb wrote the first piece for which he was paid. It was for his school paper at Philadelphia'sold Central Manual High and he received a $5 gold-piece for it. The fictional story was about good guys and bad guys in western Pennsylvania. Lieb later recalled that naturally, the good guys won.

In 1904, at the age of 16, Lieb landed a job as a junior clerk with the Norfolk & Western Railroad. While he was working, he took night classes at the local YMCA in stenography and typewriting. His schedule at the railroad was relatively easy, giving him more free time to write. Lieb did not see his first professional baseball game until 1904; by that time I had earned the twenty-five-cent admission charge for bleacher seats at Columbia Park, early home of the Athletics, and at Huntingdon Park of the Phillies.

In 1909, Lieb persuaded the Boston-based Baseball Magazine to buy a monthly biography of the best baseball players. His first four stories were about future Hall of Famers Honus (Hans) Wagner, Fred Clarke, Ty Cobb, and Hugh Jennings. He was very successful with writing these biographies and was later hired by the Philadelphia News Bureau for which he wrote financial reports. In 1911, the senior baseball reporter for the New York Post retired and Lieb saw this as his opportunity to become a sportswriter.

Before Lieb moved to New York, he remembered that after I computed it several times, I acted predictably and asked my Philadelphia sweetheart, Mary Ann Peck, to marry me and to come join me in New York. We were married on April 24, 1911, and there was never any other love in my life.

Lieb became the baseball reporter for the New York Press and covered all of the New York-based baseball teams, along with the rest of the big leagues. While in New York, Lieb recalled that in 1912, Mary and I were blessed with a devoted, intelligent, talented and pretty daughter, Mary Theresa Lieb Pearsall.

Lieb went on to cover important events in baseball history such as the Chicago Black Sox scandal during the 1919 World Series. In 1922, while handling the play-by-play wire for the New York Press, Lieb was involved in a famous scoring controversy which involved future Hall of Famer Ty Cobb. Cobb, who played for the Detroit Tigers, was up to bat and hit a sharp ground ball at New York Yankees shortstop Everett Scott. Lieb recalled that Scott kicked it, fumbled it a bit. The field was wet, and ground balls were difficult to pick up. I figured with Cobb'sspeed he would have beaten it out. Lieb credited Cobb with a hit while the official scorer, Jack Kieran, charged Scott with an error. It went virtually unnoticed until August when the Associated Press gave Cobb a .401 batting average while the league'sofficial scorer, Irwin Howe, credited Cobb with a .399 batting average. Howe revisited the game in question and, to Lieb'sdismay, went with Lieb'sdecision of a hit. Lieb remembered thinking that Howe made a bad, bad mistake.

In 1931, Lieb took a team of big league stars to Japan, a trip which proved very profitable. Along with other wise investments, Lieb was able to retire in 1934. He continued, however, to write about baseball teams. Lieb and his family moved to St. Petersburg, Florida, in 1935.

Lieb had relationships with many players, particularly members of the New York Yankees. He was quite close to Babe Ruth and is credited with giving the old Yankee Stadium its nickname: The House That Ruth Built. Lieb was also an honorary pallbearer at Ruth'sfuneral.

He had a close relationship with Yankee legend Lou Gehrig and his family. Gehrig and Lieb were such good friends that Gehrig asked Lieb to convince Gehrig'smother to attend Gehrig'swedding because she did not want him to leave home. Lieb remembered that he convinced her by saying, Your son is marrying another woman and that other woman is coming between him and his mother, and you have that choice, whether he'sto be married under good circumstances or bad.

He began to write books about baseball in 1946, the first being about the history of the St. Louis Cardinals. He went on to write 11 more books about baseball, including team histories of the Philadelphia Phillies and the Pittsburgh Pirates about which one reviewer for the Titusville Herald wrote Its excellence has far exceeded our expectations. Lieb also wrote The Baseball Story(1950) of which Arthur Daley wrote in the New York Times he has split the heart of the plate with it. He also went on to publish his autobiography Baseball As I've Known It—(1977), recalling that:

On and on the scenes rolled and the players marched, each seeming now to flow into and through one another. I found myself trying to control the rush, to get things in sequence or some kind of meaningful order, to get a perspective on it all. I was enjoying the experience. When the parade had come down to the present, I rose and decided to take up the challenge of writing the book I had been asked to do. And here it goes.

Lieb received the J.G. Taylor Spink Award in 1972, awarded by the Baseball Writers' Association of America to baseball writers who have made meritorious contributions to baseball writing. This award is given during Hall of Fame Weekend and commemorated in the 'Scribes and Mikemen' exhibit on the first floor of the Hall itself—commonly referred to as 'The Writers' Wing of the Hall of Fame;neither Lieb nor any other writer or broadcaster is actually a member of the Hall of Fame unless as a player or manager. In 1976, he was given the very first Salute by the Society for American Baseball Research (SABR).

Lieb moved to a retirement home in Houston during February 1980. He passed away on June 3, 1980, a month after submitting his last by-line for The Sporting News.

Fred Lieb covered more than 8,000 major league games including sixty World Series and thirty All-Star games. In 2013, Lieb was given the Henry Chadwick Award by SABR to honor baseball'sgreatest researchers.