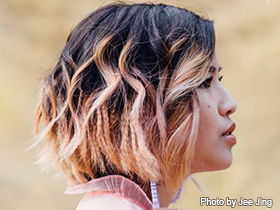 Michelle Lin's poetry has appeared in over 30 literary magazines, and her first full collection, A House Made of Water (2017), is forthcoming from Sibling Rivalry Press.

Michelle Lin earned an MFA in Poetry (2015) from the University of Pittsburgh (Pitt) and is a poet, editor, and activist. As an undergrad studying Creative Writing at the University of California - Riverside, Lin developed the collaborative project "Read Me, Thank You," which collected and replied to anonymously written burdens to encourage empathy and social awareness within communities. She has taught in both community and university settings, and has served as an editor for journals such as the Mosaic Art and Literary Journal, B. E. Quarterly, and Hot Metal Bridge. Lin's poetry has appeared in over 30 literary magazines, and her first full collection, A House Made of Water, is forthcoming in 2017 from Sibling Rivalry Press.

Michelle Lin earned her MFA in Poetry (2015) from the University of Pittsburgh (Pitt) and is a poet, editor, and activist. As an undergrad studying Creative Writing at the University of California — Riverside, Lin began to realize that "writing about her own life experiences helped her process her emotions," according to an interview with Chelsea Santos for The Highlander. Lin goes on to explain that the work of performance artist Denise Uyehara and poet Nicelle Davis inspired her to "use her own personal experiences to promote social good."

Encouraged by this revelation, Lin gathered her fellow Theatre for Social Change classmates to collaboratively develop the "Read Me, Thank You" project (2012) — a project that collected burdens written anonymously on thank you cards and then solicited anonymous responses that were shared online with the three goals of: providing a safe space for people to share, promoting a sense of community, and bringing awareness to others' suffering. The project received the Chancellor's Award for Undergraduate Excellence and Creative Work. "We want to open people up to the knowledge that everyone is guilty of passing judgments based on first impressions. We hope that people become aware that everyone carries some sort of pain and to be more sensitive before judging others," Lin said at the time of the project.

While attending the University of California, she was selected for The Gluck Fellows Program of the Arts and responsible for organizing and hosting open mics and creative writing workshops for the Riverside community (2010-2011). According to the Gluck Fellows website, the program "provides fellowships to exceptional UC Riverside undergraduate and graduate students to conduct arts-related presentations, performances, and workshops in Riverside County schools, residential facilities for elderly care and community centers."

Lin also served as Editor-in-Chief for the university's Mosaic Art and Literary Journal, and received the William Henry Willis and Birk Hinderaker Poetry Awards. In 2012, she graduated with her BA in Creative Writing and went on to earn her MFA from the University of Pittsburgh (2015), where she taught poetry and co-edited the MFA Program's literary magazine, Hot Metal Bridge.

Of her time in Pittsburgh, Lin told Chelsea Kurnick of The Casserole Reading series that she noticed a stylistic change take place — as an undergrad she had been writing "very clear, accessible, narrative poetry," she said. "And coming [to Pittsburgh] and working with professors who experiment more and working with writers who have completely different aesthetics has been really great. It was incredibly frightening at first, but I felt like it was really good for me," she said while still a grad student. She also began writing more about her Asian-American heritage at the time. "Because, coming from California to Pittsburgh, it was really startling for me. There [are] not a lot of Asian-Americans. A lot of Asian-Americans I see here are Chinese exchange students and they're very different from me."

Michelle Lin's work has appeared in over 30 journals, such as Pretty Own Poetry, Apogee, Cleaver Magazine, Crab Orchard Review, and ZYZZYVA. She has also collaborated with "grlhood" by contributing work in support of the group's mission to "empower girl writers—to encourage them to share work and witness their writing in the world, as something that demands to be heard and demands a response." In addition, she participated in a reading in support of this mission, alongside writer Tameka Cage Conley and others.

Her poem "California," from Blunderbuss Magazine (2015), was selected for publication by the Public Poetry Project of the Pennsylvania Center for the Book in 2016.

Lin has served as a reader for Twelfth House Journal and worked as a Program Developer at Asian Pacific Islander (API) Legal Outreach, a social justice non-profit in California. Her first poetry collection, A House Made of Water, was publishsed by Sibling Rivalry Press in 2017. At the time of this writing and according to her website, Lin is a Kundiman Fellow, co-lead coordinator for the KSW (Kearny Street Workshop) Presents reading series, and Grassroots Fundraising Manager for RYSE Youth Center in Richmond, California.