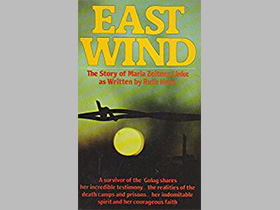 Many years after working as a translator in the German prison camps, Linke wrote Eastwind: The Story of Maria Zeitner Linke.

Maria Zeitner Linke was banished with her family to Siberia during World War I, and later held captive as a prisoner of war by Russian Communists from 1945-1954. She moved to the United States in 1957, and lived in Pittsburgh and Emlenton, Pennsylvania. She recounted her story to Ruth Hunt in memoir, East Wind.

Maria Zeitner was born on August 13, 1908, in a small Russian village, to Max and Maria Zeitner. Her parents were also born in Russia, though they, like Zeitner, were German citizens-- their parents had emigrated from Germany to attempt to prosper in a newly populated area of Russia.

During the years before Zeitner was born, her father worked in a factory. But around the time of his daughter's birth, he and his two brothers had become fed up with their working conditions, and decided to move to an agricultural community, Urbach, to start their own farm machine factory.

In Urbach, a German-speaking town, Zeitner's family flourished. In 1912, her uncle Otto branched into the blossoming automobile business, bringing the family even more financial security. Zeitner and her brother, Franz, enjoyed a happy, carefree childhood until September of 1914, when World War I began. That summer, Zeitner's father and uncles were arrested by the Russian government. Soon after, in January, 1915, the rest of her family was ordered to Siberia, where Germans were banished by Russia for the duration of the war, to ensure that they wouldn't engage in anti-Russian war activity or escape back to Germany. Here they were reunited with Max and lived humbly, yet freely, for several years.

Zeitner and her family were then unexpectedly struck by violence in 1918, while they were living in Werch Kisilsk. Caught in the middle of the "Red" (Communist) and "White" (pro-monarchy) armies, the village was swiftly invaded by gunfire. The family escaped to several known safe cities in Russia, with the ultimate goal of reaching Moscow, where they hoped to be able to obtain legal permission to move to Germany. They migrated from town to town, and in 1920, came across some bad luck: Franz was forced to join the Russian army, and he eventually died in service.

Zeitner and her family lived peacefully until April, 1945, when they were again struck by war; this time World War II. Zeitner, now Maria Zeitner Linke, had been living in Schonefeld, Germany, working as an interpreter for the Russian volunteer labor force-- now married, her husband, Fred, was deployed in the army. Linke's mother and sisters had evacuated to Dessau; and her father had been living in Berlin to continue working. When Linke heard that Berlin had been severely bombed, she rushed there to check on her father, and was relieved to find him alive. She soon left to visit her mother and sisters, and shortly thereafter returned to take care of her father. But when she returned to his house in Berlin, she was immediately accosted by Russian Communist soldiers.

Thus Linke was thrust into nine years of living as a prisoner of war. Sent from prison camp to prison camp-- including Buchenwald, an infamous Nazi concentration camp taken over by the Soviets in 1945-- she would sometimes earn lenience when her captors learned that she could speak Russian; and even more so when they discovered her good-natured personality. At each camp, Linke developed personal relationships with her fellow prisoners, often lending them support, strength and hope. Through beatings, starvation, and cruel delusions of near freedom, Linke relied on her optimism and faith in God to survive.

In the book East Wind, Ruth Hunt writes Linke's account of her experience as a prisoner of war. Linke recalls situations and relationships with people she met in great detail; including helping to cover up a friend's pregnancy, and an emergency appendectomy near the end of her prisoner experience. Recounting an especially brutal train ride from one prison camp to another, Linke recalled:

"Though I never seriously considered suicide during those years, there were times when I would have welcomed death. If to be with Christ is "far better" than even the pleasant, peaceful lives that some are permitted to live, how must that prospect have contrasted with the reality around me? Of course death would have seemed a welcome release, but God had already preserved me so miraculously that I just couldn't believe it was all going to end now on this wretched train somewhere east of Berlin. And if I was meant to live, it must be a life with meaning; there must be a reason why I, Maria Linke, was crouched on that hard board with an elbow in my ribs on one side and a demented voice shrieking 'Erik, Erik!' over and over again in my ear on the other."

In June, 1954, Linke's first step to freedom was transport to Camp Friedland, a facility near G??ttingen, Germany, built for those coming home from the prison camps. After receiving health care and sharing information on about 80 other prisoners whose names and addresses Linke had memorized, she was reunited with her family in Stuttgart, Germany. She moved to the United States in 1957, and worked as a maid and cook for a few years before becoming a housekeeping supervisor in a hospital. In 1960, she progressed to a job as an executive housekeeper, living in Cleveland, Ohio; then Pittsburgh, Pennsylvania. She also gave lectures about her experience as a prisoner of war. Linke died in September, 1978 of complications from cancer.