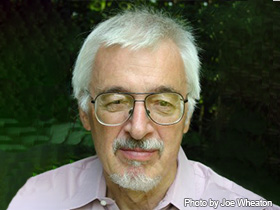 Born in Lock Haven, Richard Lipez was educated at Lock Haven State College and Pennsylvania State University. After serving in the Peace Corps from 1962 to 1967, he refocused his efforts on writing and journalism. Lipez writes mystery novels under the pseudonym Richard Stevenson. His work has contributed much to the diversity and LGBT representation in the mystery genre.

Richard Lipez was born in Lock Haven, Pennsylvania, on November 30, 1938. His father Harris worked for Piper Aircraft, a builder of small planes and the heart of the small city's industry, and his mother Helen worked out of their house. After Piper moved its headquarters away from Lock Haven, his father founded and managed the city's first radio station, WBPZ. Lipez told The Times Union of Albany, New York, that he ran a weekly jazz show on the station as a teenager.

Lipez attended Lock Haven State College (now Lock Haven University of Pennsylvania), and earned his Bachelor of Science in English with a minor in History. He began graduate studies in American Literature at the Pennsylvania State University, but opted to volunteer for the Peace Corps in 1962 before graduating. He taught English Language and Composition to ninth grade public school students in Addis Ababa, Ethiopia.

From 1964 to 1967, Lipez worked as a Peace Corps program evaluator out of Washington, DC. His work brought him to Ethiopia, India, the Caribbean, and Central America. "It was invaluable training as a writer," he told The Times Union. "We worked with top writers and editors writing reports that were essentially short nonfiction books in the style of the Atlantic." He also helped train new volunteers at the University of Utah.

After his time in the Peace Corps, he served as the executive director for Action for Opportunity, an anti-poverty agency. In 1970, he left the organization to focus on writing and journalism full-time.

Lipez wrote book reviews for The Washington Post and Newsday, as well as writing regular editorials for The Berkshire Eagle of Pittsfield, Massachusetts, where he lived with his then-wife Hedy and their two children. He also contributed articles, fiction, reviews, and satirical pieces to publications, such as Harper's, Atlantic, and Newsweek. In 1979, he co-authored his first novel, a thriller titled Grand Scam with Peter Stein.

Two years later, in 1981, he published Death Trick, the first book of an ongoing detective series revolving around fictional Albany private investigator Don Strachey. While writing the novel, Lipez traveled to Albany on weekends to the city's vibrant gay community. He wrote under the pseudonym Richard Stevenson in order to protect his identity and that of his family in the small Pittsfield community. The main character reflected Lipez's own struggles with his sexual identity.

"It was an excruciatingly difficult time, as I was coming to realize, very slowly and painfully, that I was not heterosexual, I was homosexual," Lipez told The Times Union. Writing served as an outlet. In 1989, he and Hedy divorced, and he has since been with his partner Joe Wheaton, a sculptor and furniture maker.

As an openly gay activist, Lipez has continued to develop the Donald Strachey series. His main character’s openness regarding his sexuality was a major step towards inclusivity in the mystery genre as a whole. The novels often confront gay issues; 1993's Third Man Out, for example, features the murder of a gay activist and Strachey's subsequent sleuthing. Thus, the novels found popularity in the LGBTQ+ (Lesbian, Gay, Bisexual, Transgender, Questioning plus additional identities) community, where Don Strachey’s character and representation resonated, although they gained mainstream appeal as well. They have already been translated into German, French, and Spanish.

Lipez said he tried to counter stereotypes in crime fiction of gay people "either as hideous psychopaths or pathetic misfits," according to The Times Union. Reviews of his books suggest he goes a long way toward meeting that goal. The Chicago Tribune review for Third Man Out says, "Stevenson [Lipez] takes a familiar whodunit formula and infuses it with a new life. The action is lively and the plotting honest and nonexploitative."

Four of the Strachey books have also been made into television movies by Here! Films. Lipez has sold the film options to the rest of his books. At the time of this writing, Lipez lives in rural Becket, Massachusetts, with his husband Joe Wheaton. He continues to write, most frequently for The Berkshire Eagle and The Washington Post.