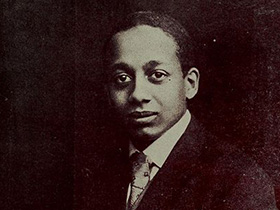 Born in Philadealphia, Alain LeRoy Locke was the first black US Rhodes Scholar and the chief interpreter of the Harlem Renaissance in Literature.

Alain Leroy Locke was born in Philadelphia, Pennsylvania, in 1886. Locke became the first African-American to receive the Rhodes scholarship, allowing him to travel to England and attend Oxford University. He returned to the USto teach at Howard University and earned a PhD in philosophy. Locke enjoyed writing about race in society, and his most famous work, Race Contacts and Interracial Relations: Lectures on the Theory and Practice of Race (1916), emphasized the issue. He also became the first African-American president of the American Association for Adult Education (AAAE). Locke died of heart disease on June 9, 1954 in New York, New York.

Alain Leroy Locke was born in Philadelphia, Pennsylvania, on September 13, 1886. He was brought up in a stable, African-American household by both of his loving parents. His father was a successful lawyer in Philadelphia, and his mother was a well-liked public school teacher. As a child, Alain survived a bout with rheumatic fever that permanently damaged his heart. Eventually he became healthy enough to attend school. While attending Central High School in Philadelphia, Locke excelled in his studies, graduating second in his class. Afterwards, he attended the Philadelphia School of Pedagogy, where he graduated first in his class. Because of his outstanding academic achievements, Locke was accepted into Harvard University in 1907.

Locke achieved great things in his years at Harvard. During his junior year, he became a member of Phi Beta Kappa, the nation's oldest and largest academic honor society, and became very popular with his classmates. Locke's new friends at the university began to draw his attention to a major issue on campus: racism. As an African-American, he became concerned. He did not feel inferior to his white classmates and hoped to address these issues later on in his career. Through his hard work and dedication, Alain graduated from Harvard in just three years and was awarded the prestigious Bowdoin Prize in English Literature for an essay he had written in an English class.

After graduation, Locke decided to study issues of color outside the United States. He applied for the Rhodes scholarship from his home town of Philadelphia with the hope of attending Oxford University in England. The Rhodes scholarship allowed a select group of men to attend Oxford University and to be exposed to a culture different from their own. At the qualifying exam, Alain scored the highest and beat seven white students in the process. He was awarded the scholarship before the committee discovered he was black, but after careful consideration the committee decided to let the award stand. However, Locke was not invited to attend the annual Thanksgiving dinner held by the white committee.

Locke arrived at Oxford in 1910 with high expectations. His expectations were met when he found himself surrounded by diverse crowds of students who, unlike those at Harvard, considered themselves equals regardless of race. However, by talking with this diverse group of students at Oxford, Locke discovered that discrimination was a problem throughout the entire world, and this troubled him. Locke later decided to leave Oxford and move to Germany to study philosophy and learn how to combine diversity with community. In Germany, Alain looked at the participation of minorities in economic, civic, and social life of the community. This was a subject he wanted to study in the United States as well, so Locke left Europe and returned to the United States in 1913 with the hope of continuing his studies and becoming a teacher.

Upon his return to America, Locke found himself in a dilemma. White universities would not allow him to teach because he was black. With limited opportunities available, Locke chose to teach at Howard University, an African-American college in Washington, DC, where he would remain for 42 years. While teaching English at Howard, Locke also found time to earn a PhD in philosophy at Harvard in 1918. He decided to teach philosophy as well and began to develop the philosophy department at Howard University. Alain's hard work would eventually lead him to become chairman of the philosophy department.

Locke enjoyed philosophy because it allowed him to focus on the impact of race in culture, a topic that first attracted him as an undergraduate at Harvard. Locke decided to address issues of race in his writing. His most well-known work, Race Contacts and Interracial Relations: Lectures on the Theory and Practice of Race (1916), focused on how blacks and whites could come together and live in a multi-ethnic society. In this work, Locke declared, "The race issue has not only been solved but...has performed a social function in society because it has blended two heterogeneous elements into a homogeneity of which either one in itself would have been incapable without the collaboration and help of the other." He later became head of what was called the "New Negro Movement," shifting his focus to young African-American poets, writers, and artists with talent.

Later on in his life, Locke decided he wanted to teach adults how to live in a democratic and multi-ethnic society. In 1945, he became the first African-American president of the American Association for Adult Education (AAAE), a program that provides leadership for adult growth and development. Locke moved permanently to New York City where he taught at the City College for New York (CCNY). Locke was preparing to retire while working on The Negro in American Culture (1925). Unfortunately, Locke never got the chance to complete the work. He died in 1954 due to heart problems caused by the rheumatic fever he had suffered as a child. Alain Leroy Locke's name lives on through his works, contributions, and in the hearts and minds of those who remember his outstanding achievements.