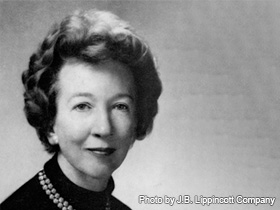 Humorist and children's author Hildegarde Lockridge was born in Franklin in 1908.

Born in Franklin, Pennsylvania in 1908, Hildegarde (Dolson) Lockridge became a distinguished writer of historical, children's, and mystery books. She attended Allegheny College and worked as both a copywriter and a freelance writer. She died in Columbus, North Carolina in 1981.

Hildegarde (Dolson) Lockridge was born in Franklin, Pennsylvania, on August 31, 1908. Her parents were Clifford and Katharine Dolson. In May 1965, Dolson married writer Richard Lockridge.

Lockridge studied at Allegheny College from 1926 to 1929. In 1933, she moved to New York City and worked as an advertising copywriter for Bamberger, Franklin-Simon, Gimbel's, and Macy's. In 1938, she devoted the rest of her life to freelance writing with the publication of her first novel How about a Man (1938).

Lockridge published her work under her maiden name and is credited with writing nearly 20 books—among which are historical books, children's books, and mysteries. Her very popular collection of stories, We Shook the Family Tree (1946), is an anecdotal account of her youth in Pennsylvania as well as of her first jobs in New York. It focuses mainly on a mysterious character named Lucy Ramsdale and is set in Wingate, Connecticut. She also frequented the pages of the New Yorker with humorous contributions.