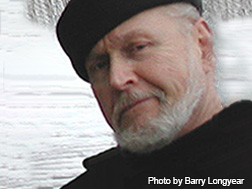 Born in Harrisburg, Pennsylvania, Barry Longyear is a well-known science fiction author. Throughout his early life, he explored many options for employment, including the Army and art, before finally selling his first short story, "The Tryouts," to Isaac Asimov's Science Fiction Magazine. His extensive published works, including many different book series, are full of thrill, intrigue, and sci-fi wonders that have won him many awards.

Barry Brookes Longyear was born in Harrisburg, Pennsylvania, on May 12, 1942. Though his future held much writing, he has said that English was his least favorite subject in school, and that he often fabricated sources and authors when writing his research papers. After high school, Longyear attended several different art and commercial schools looking to find his path, though he didn’t stay in any one school for very long. This period ended when he joined the Army, from which he would later be discharged in 1965. He went on to attend Wayne State University for two years. While at Wayne University, he met and married Regina Bedsun.

Longyear left the Army with designs on the publishing industry and worked in Detroit and then Philadelphia as an editor and ghostwriter starting in 1967. He even owned his own printing company for a very brief period before shutting it down in 1977. After this failed venture, Longyear became a full-time author, though he often states today that he had no idea how to write or what to write about in those early days.

Longyear’s career has heavily focused on the thriller and science fiction genres, beginning in 1979 with the publication of Enemy Mine. It is arguably his most praised work, centered on a human and an alien who are marooned together in the midst of a war between their worlds and must depend on each other for survival. This story of acceptance and understanding was widely praised, and even adapted into a film in 1985, though it was not a hit at its release. Longyear quickly followed Enemy Mine with the publication of two short story collections (Circus World and Manifest Destiny) as well as his novel City of Baraboo, all published in 1980.

Longyear’s work has been lauded and awarded consistently throughout his career. His most heavily praised work has been Enemy Mine, which has received, among other awards, the 1979 Nebula Award, the 1980 Hugo Astounding Award for Best New Writer, and the 1979 Locus Award.

Longyear’s nonfiction work,  aside from those giving writing advice, concern substance abuse and recovery. The first of these books is the much-praised Saint Mary Blue (1988). Longyear was hospitalized for alcoholism in December of 1981, and since then has been very candid about his struggles and experiences. The book, published after a hiatus during Longyear’s recovery, chronicles his struggles with humor and heart, and is widely lauded as a comforting read for those struggling with similar experiences. This publication was later followed by Yesterday’s Tomorrow (1997), a meditation book aimed at “hard cases” like himself who have struggled to maintain sobriety. Longyear also runs a recovery blog, “Life Sucks Better Clean,” where he posts frequently to viewers working to stay clean or starting their recovery journey.

The publication of Saint Mary Blue marked a significant shift in Longyear’s writing philosophy, as well as a change in his personal life. He has admitted to previously writing in pursuit of public approval and acceptance. However, with Saint Mary Blue, Longyear discovered that writing “a story he wanted to tell” was its own reward. His approach to writing is heavily focused on writing first, rather than marketability, deadlines, or other concerns. This focus on spontaneous creativity and passion rather than money and sales is something that many authors admire in Longyear and adopt through his advice.

After this point, Longyear’s works were published at a rapid pace, a testament to the author’s imagination and dedication. His bibliography of novels has reached well over forty books, many of them being parts of longer series. He is also a prolific author of short stories, which are published often in various magazines and journals.

Longyear enjoys helping other writers hone their craft, often attending or hosting writing workshops for those working in his preferred genres. In fact, one of his earliest works was a writer’s introduction to fiction, Science Fiction Writer’s Workshop-I (1980). More recently, he hosted an online writer’s workshop, the content of which he condensed into a novel, The Write Stuff, and published in 2011.

Longyear published what he refers to as his “magnum opus,” a mystery-thriller in a science-fiction universe entitled The War Whisperer series. The series received a seven-book release through the course of 2019 into 2020 and is written as an “autobiography” of its main character, a boy named Geronimo living on a post-apocalyptic Earth. As of this writing, Longyear lives in New Sharon, Maine, with his wife, though he often travels for readings and writing workshops.