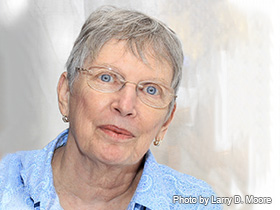 Lois Lowry was born in Honolulu, Hawaii. Her family moved to Carlisle, Pennsylvania, in 1942. Lowry excelled in school and attended Brown University, but left school after marrying and starting a family in her sophomore year. Lowry nurtured an early interest in writing, which gradually turned into a professional career. Her many children's books include the Anastasia series (1979-1991), Autumn Street (1980), and The Giver (1993). She has won two Newbery Medals and a Boston Globe-Hornbook Award.

Lois Lowry was born on March 20, 1937, to Robert E. Hammersberg and Katherine Landis in Honolulu, Hawaii. In 1939, they moved to Brooklyn, New York, and then they moved to Carlisle, Pennsylvania, in 1942, when the US entered World War II. Hammersberg, an army dentist, was called off to duty.

When six-year-old Lois entered the Franklin School in Carlisle, she had already been reading for three years. She attributed this precociousness to her mother, a kindergarten teacher, and to her older sister Helen, who read to her. Lowry's younger brother Jon was born that same year. During these early years in Carlisle, Lowry became more and more interested in writing, receiving a subscription to a children’s writing magazine, Jack & Jill. Her mother read to her nightly, and her older sister Helen shared her knowledge about letters and words starting at just three years old. In fact, these teachings were so impactful that Lowry was able to skip the first grade entirely.

In 1948, the Hammersberg family moved again to Tokyo, Japan. Lowry attended a special school for military families, but she felt stifled by a curriculum that did not challenge her creatively. However, she fondly remembers Japan. The family briefly moved back to Carlisle in 1950, where she attended ninth grade, but in 1951, they moved to Governor's Island, New York, where she attended Curtis High School on Staten Island. In 1952, Lowry entered Packer Collegiate Institute in Brooklyn Heights, New York, where she finished high school. She entered Brown University in 1954, where she met Donald Grey Lowry, a naval officer. In 1956, she left school to marry Donald and move with him to San Diego, California.

The couple moved around the United States several times with their four children: daughters Alix and Kristin, and sons Grey and Benjamin. According to Joel Chaston's biography, Lois Lowry, Lowry recalls the first several years of her married life as a "nice, pleasant, interlude. " However, in 1962, her sister Helen's death from cancer was a sobering experience that later played a prominent role in Lowry's life. As her children grew older, she found time to complete her degree in English Literature from the University of Southern Maine in Portland in 1972. After earning her BA, she pursued graduate studies at her alma mater. During this coursework she was introduced to photography, which became a life-long passion and profession. She also took photos to accompany the articles she submitted as a freelance journalist. As Lowry nurtured her budding careers, she and Donald became less compatible, and they divorced in 1977. She would meet and marry her second husband, Martin Small, very soon after.

As a freelance journalist in the 1970s, Lowry submitted a short story to Redbook Magazine that caught the attention of an editor at Houghton Mifflin. The story was meant for adults but was told through the eyes of a child. The editor suggested that Lowry write a children's book. She agreed and wrote A Summer to Die (1977). This novel parallels Lowry's own experience with her sister's terminal illness. She began her career as a writer for children and young adults, while not shying away from content that confronts life’s difficulties.

In 1980, Lowry published her most autobiographical work, Autumn Street. The main character is a girl named Elizabeth whose father is away at war. Elizabeth befriends her grandmother's African American cook, Tatie, and her grandson Charles. In the story, Elizabeth encounters racism, her beloved grandfather's debilitating stroke, and a murder—a story that closely parallels Lowry's actual childhood in Carlisle, Pennsylvania, during which her grandfather’s cook, Fleta Jordan, lost her granddaughter Gloria to murder. The real "Autumn Street" is called College Street in Carlisle.

While many of Lowry's works deal with somber topics, she is equally well-known for the fun and humor in her books. In 1979, she began her "Anastasia" series of books with Anastasia Krupnik, the story of a precocious and quirky ten-year-old girl who wants to be a writer. The Anastasia character was based, in part, upon Lowry's own daughters. Even in her lighter books, however, Lowry does not shrink from confronting the gloomier issues of life. For instance, Anastasia must deal with her grandmother's senility and impending death. Lowry manages to mix the comic and the tragic aspects skillfully in her stories in a way that resonates with many young readers, who often cope with similar issues.

Because she has taken on such difficult subject matter, some of Lowry's works have been controversial. Some parent groups have been particularly concerned about her book, The Giver (1993). This novel for young readers presents a dystopian view of a future society where history is hidden, people are conditioned not to see colors, and those who do not fit within the society's narrow definition of acceptability are "released." The protagonist later discovers being "released" is synonymous with being euthanized. The book’s dystopia was heavily inspired by her experiences with her elderly father’s memory loss due to Alzheimer’s. Many have deemed this material to be inappropriate for children, and as a result, The Giver has been banned in some schools. Nevertheless, The Giver has been published in over thirty languages, including Russian. She continues the controversial themes apparent in The Giver in her books Gathering Blue (2000) and The Messenger (2004).

Writing about both funny situations and serious issues has sustained Lois Lowry through her own hard times. Not only did she lose her sister to cancer earlier in life, but her son Grey was killed in a fighter plane crash in 1995. These losses, while painful, shaped much of her writing, and allowed her to grapple with difficult topics in an earnest, open manner. She also lost her second husband Martin Small in 2011 after thirty years together. However, she would later find love once again in Howard Corwin, a retired doctor.

Lowry’s work has been widely lauded throughout her career. She has won two Newbery awards, one for Number the Stars in 1990 and one for The Giver in 1994. She also won the Regina Medal from the Catholic Library Association in 1994. In addition, she has several honorary degrees from many different colleges and universities.

At the time of this writing, Lois Lowry continues to write and make speaking appearances. As of 2020, Lowry lives in Cambridge, Massachusetts, with her Tibetan Terrier, Alfie, and her cat, Lulu. She also spends time at her farmhouse in Maine each year with her grandchildren. According to her website, she writes for her grandchildren and their generation, "[trying], through writing, to convey [her] passionate awareness that we live intertwined on this planet and that our future depends upon our caring more, and doing more, for one another."