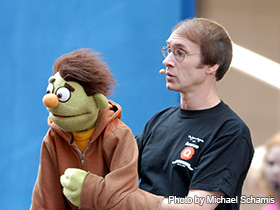 On February 25, 1958, Richard Lyon was born in Rochester, New York. After studying theater at Penn State University, Lyon went on to specialize in puppetry at the Institute of Professional Puppetry Arts in Connecticut and the Institut Internationale de la Marionnette in France. He began working alongside Jim Henson and Frank Oz in several productions including Sesame Street. He also created puppets for shows such as Crank Yankers and Stick Stickley. His most notable work was creating the puppets for and starring in the Tony-winning Broadway musical Avenue Q. He now lives in New Jersey with his wife, Tonya Dixon, and daughter Kennedy.

On February 25, 1958, Richard Lyon was born in Rochester, New York. As a child he was given his first puppet, a cat, and often used puppets in his projects in elementary school. He attended Penn State University, originally intending to study the saxophone but soon switching to theater. During his time at Penn State, Lyon took part in many student theater organizations, including the Penn State Thespians and the Student Production Organization. In his 11th term, he began his own theater organization, Lyon Entertainment, Inc.. He also created the Lyon Puppets, which performed shows throughout the Northeast, including the Central Pennsylvania Festival of the Arts.

After graduation, Lyon went on to study puppetry at the Institute of Professional Puppetry Arts in Connecticut and the Institut Internationale de la Marionnette in France. While at school in Connecticut, Lyon met Jim Henson and began working for him at the Jim Henson Company, as well as Jim Henson's Creature shop. In 1989, Lyon joined the crew of Sesame Street, puppeteering characters such as Big Bird and Cookie Monster. Eventually, Lyon began specializing in Elmo's World segments, where he puppeteered computer-generated characters by using a motion-capture system. To move the animated objects shown in Elmo's World, Lyon would manipulate sensors attached to representative items, such as a piece of foam, to tell a computer how objects onscreen change relative to other objects, represented by other sensors. Lyon also worked alongside Henson in several other projects including Muppetvision 3-D,an attraction at Walt Disney World; and The Jim Henson Hour.

While still working on Sesame Street, Lyon began taking on more side projects. He built and puppeteered characters for "The Magic Schoolbus Live" tour. In 1997, Lyon worked on another Henson project, The Bear in the Big Blue House, often acting as the title character for press photos. In addition, from 1995 to 1998, Lyon puppeteered Stick Stickley, a Popsicle stick puppet used in short segments on Nickelodeon. Lyon helped work a puppet named Redgick Baby for the 1997 movie Men In Black.

By 2003, Lyon had begun creating some adult themed puppets. He had shot several pilots for VH1 and Nickelodeon, but it was a pilot for a Comedy Central program that was finally picked up. The show was called Crank Yankers and featured puppets re-enacting prerecorded prank calls made earlier by famous comedians. Each of the puppets had its own unique personality and was voiced by a different comedian. For the first season, Lyon worked as lead puppeteer. Shortly after the end of the first season, however, the show was cancelled.

Fortunately Lyon was already caught up in another project. In June 2001, he had performed two songs from a developing musical called Avenue Q at the Elaine Kaufman Cultural Center in New York City. The performance was well received, and development of the project continued. Lyon was hired to build the puppets for the performance—a complex project as the puppets had to be light enough for an actor to hold up for a three-hour performance. Avenue Q opened off-Broadway at the Vineyard Theatre in New York City on March 19, 2003. Lyon puppeteered the characters of Nicky, Trekkie Monster, and other minor characters. Lyon's role and the others were unique in Avenue Q as the puppeteers were on stage manipulating the puppets in front of a live audience, and he had to act as an extension of the character he was controlling. The use of puppets in the story was important as it allowed the writers to explore sensitive issues without overwhelming or offending the audience. As a result of its innovativeness, in 2003 Avenue Q won the Lucille Lortel Award for Outstanding Off-Broadway Musical.

On July 31, 2003, Avenue Q moved to-Broadway to the Golden Theatre. The musical received rave reviews: The New Yorker wrote, "The musical puppet-and-people show "Avenue Q" (at the Golden) has so much to recommend it—an exceptionally gifted cast, a strong book by Jeff Whitty, with equally strong music and lyrics by Robert Lopez and Jeff Marx, and the splendid direction of Jason Moore—that to focus on the highs in the production is rather like begging at a banquet when one's plate and cup are full to overflowing." Andrew Gans of Playbill agreed, writing, "My only complaint is that I cannot live on Avenue Q, but thankfully I can — and plan to — visit there often." In 2004, Avenue Q was nominated for six Tony Awards, and won three: Best Musical, Best Original Score Written for the Theatre, and Best Book of a Musical.

When Avenue Q was given a run in Las Vegas in 2005, Lyon decided to leave Broadway to perform in the new rendition. The musical only lasted in Las Vegas for nine months, eventually being closed to make room for Spamalot. During his time in Las Vegas, Lyon met Tonya Dixon, a costar who had acted in the Las Vegas rendition of Avenue Q as apartment superintendent "Gary Coleman," a parody of the Diff'rent Strokes star. The couple married in 2006. After Avenue Q closed in Las Vegas, the couple moved to New Jersey, and Lyon briefly reprised his role on Broadway. On 2 May, 2008, the couple welcomed daughter Kennedy.

Photo Credit: Michael Schamis. "The cast of Avenue Q performs "It Sucks to Be Me" at Broadway on Broadway." 38970. Photograph. Licensed under CC BY-NC-SA 2.0. Cropped to 4x3. Source: Wikimedia. New York, NY.