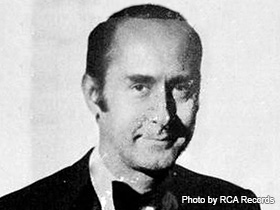 Acclaimed for his scores to The Pink Panther and Breakfast at Tiffany's, composer Henry Mancini learned to play piano in West Aliquippa.

Henry Mancini was a famous composer who conducted his major works between 1952 and 1982. He grew up in West Aliquippa, Pennsylvania, were he learned how to play the piano from the legendary Max Adkins. From his humble beginnings, Mancini conquered the Hollywood film industry through his musical accompaniment of popular films. Mancini's musical genius in Peter Gunn (1958), Breakfast at Tiffany's (1961), The Pink Panther (1963), and numerous other films, have earned him 20 Grammys and four Academy Awards. Mancini died in 1994 after a long battle with cancer. The Pink Panther, his most renowned melody, can be hummed by young and old alike.

Henry Mancini was born to Italian immigrants Quinto and Anna Mancini, on April 16, 1924, in Cleveland, Ohio. Mancini's love and devotion for music was founded through his father's instruction of the flute and piccolo. After relocating to West Aliquippa, a small mill town outside of Pittsburgh, Mancini began taking piano lessons from Pittsburgh's concert master Max Adkins. Mancini's adoration for the piano developed through Adkins' instruction. After graduating high school, Mancini decided to study music at the Carnegie Institute of Technology. In 1942 he left the Institute to attend the Juilliard School of Music. Mancini's studies at Juilliard were quickly ended by his military service in World War II. His service introduced him to Glenn Miller's Army Air Corps Band, for which he became a pianist and arranger after discharge. Mancini met his soon to be wife Ginny O'Connor, a singer for the Miller Band, while arranging music for the band. In 1947 Mancini married Ginny and left the band to pursue his career in Hollywood.

Once in Hollywood, Mancini worked as a private musician and arranger for radio programs and nightclubs. In 1952, he joined the Universal-International Film department at Hollywood Studios. Scores written for an Abbott and Costello movie landed Mancini the job of "house arranger." Any film or program needing musical assistance was handled by Mancini. Mancini was asked to write the scores for The Glenn Miller Story (1954). The film told the story of legendary bandleader Glenn Miller, a close friend of Mancini's. Mancini's genius in score writing landed him his first Academy Award nomination for this film. Touch of Evil (1958) proved to be Mancini's breakthrough album. The film inspired Mancini to bring in outside jazz performers to play the scores for the film. Such a notion caused tension on set and the film was the last compilation of scores Mancini completed for the Universal-International Film department.

However, Mancini did not stay unemployed for long. Blake Edwards, a former Universal director, hired Mancini to write music for Peter Gunn (1958), a television program he was directing. The detective series became an instant success and the catchy theme song reached number one on the Billboard's chart were it stayed for ten weeks. The theme earned Mancini his first Emmy nomination and two Grammy wins. Due to the success of Peter Gunn, Blake Edwards rehired Mancini to work his magic on Mr. Lucky (1959); a serious program about a professional gambler. The television program failed to achieve ratings success, but Mancini's scores again gained popularity to win him another Grammy nomination. In 1961, Mancini was again hired by Edwards to write the music for his film in progress: Breakfast at Tiffany's (1961). The film cast Audrey Hepburn as a poised New York socialite who became infatuated with an inspiring writer. Mancini worked with lyricist Johnny Mercer to create the song "Moon River." The lyrics were performed by Hepburn and earned Mancini and Mercer two Oscars (Original Song, Scoring of a Dramatic or Comedy) and five Grammy's. In 1962, Mancini and Mercer again outdid themselves with the composition and lyrics of The Days of Wine and Roses. The song landed the popular duo an Oscar for Best Original Song. The following year, Mancini went on to compose his most renowned theme song for The Pink Panther (1963), a comical film involving a detective and his hunt for a jewel thief. The song was nominated for an Oscar and Grammy and won the American Society of Composers and Performers (ASCAP); an award presented to the most performed music from television and the box office. The Pink Panther's success secured Mancini's legacy in the Hollywood film industry. For the next 25 years, Mancini continued to compose music for Edwards' programs and films, although few gained the popularity of his early works. During his career he was nominated for 72 Grammys (winning 20) and 18 Oscars (winning four, including for the song score to 1982's Victor/Victoria). He also was nominated for two Emmy Awards.

For four decades Mancini dazzled audiences with his melodic arrangements. After a long battle with cancer, Mancini died on June 14, 1994, in his home in Los Angeles, California. His legacy is continued through his three children. In 1997, composer, conductor, and good friend to Mancini, Jack Elliot, founded the Henry Mancini Institute in honor of Mancini. The Institute aims to promote music appreciation by providing intensive training and outreach programs to today's youth. A commemorative stamp was issued on April 14, 2004, by the United States Post Office to pay tribute to Mancini's inspirational compositions. He is also commemorated with a star at 6821 Hollywood Boulevard on the Hollywood Walk of Fame.