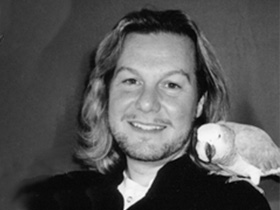 Born in 1957, Pittsburgh native John Manders has drawn cartoons, designed stage sets, and worked as a graphic artist. He is best known for illustrating over 30 picture books and contributing to numerous children's magazines. Manders enjoys much historical research in helping to develop his artwork, using an "old master's" style of applying thick, layered watercolors over a monochromatic underpainting.

John Manders, born in 1957 in Albany, New York, began drawing and painting when he was a young boy growing up in Syracuse. He jokes that he was born with a drawing pencil in his hand, reports Karen Macpherson of the Pittsburgh Post-Gazette. He gained interest and experience in illustrating while working as a set designer at the Cicero Amateur Summer Theater.

Manders came to Pittsburgh to attend the Art Institute of Pittsburgh in the mid 1970s. Graduating in 1979 after earning an associate's degree in specialized technology (visual communication), he moved to New York City and worked as a freelance graphic designer. While in New York, he also took drawing classes in children's illustration and animation at the School of Visual Arts as well as life drawing classes at the Fashion Institute of Technology. "Life in the big city got to be daunting," he admitted, and Manders moved back to Pittsburgh in 1990. Working as a graphic designer, he also taught graphic design at the Pittsburgh Technical Institute for several years. Despite the long hours, Manders enjoyed teaching, and also helped design the curriculum for one course (a history of graphic design). In 1997, Manders founded the Pittsburgh Society of Illustrators, serving as its first president. He is also a member of the New York Society of Illustrators. He wanted to follow up on a longtime interest in illustrating children's books, and so he began submitting his artwork to children's magazines.

"I didn't come out of the box as an expert children's book illustrator," Manders admits, "I had to learn a lot. There's only one way to learn, and that's by doing it. Children's magazines are a wonderful way to do that, giving artists a chance to grow and experiment...At the same time, editors from children's book publishers are always scanning these magazines, looking for up-and-coming artists." His Houghton Mifflin editor so enjoyed his magazine work that Manders was offered his first book contract to illustrate King Snake (1997) by Wendy Slotboom.

After reading a manuscript, John Manders usually works with an author only when the project requires historical research. Some manuscripts allow him to draw freely, whereas children's textbooks give him specific instructions. Manders has a particular technique for illustrating. First drawing thumbnail sketches, he then enlarges copies of the thumbnail sketches using translucent paper. Manders explains that the best part of illustrating for a book is this preliminary sketching because "That's the stage where you get to visualize all the costumes, design all the sets and cast all the characters. It's like being a movie director."

When drawing, he usually does several initial sketches when perfecting his illustrated characters, because his head is "full of clich??s" that may distort the final artistic result. This problem was particularly apparent in the "Step into Reading" series' Lewis and Clark: A Prairie Dog for the President (2003), written by Shirley Raye Redmond, a story focusing on the two explorers' journey before examining their interest in prairie dogs along the way. "All I knew about Lewis and Clark was what I remembered from high school, which was not much," Manders stated. "When I got this story to illustrate, I phoned my dad [Eric, a historian] to tell him about it, and he rattled off a neat summary of the expedition." In doing this thorough research, Manders explains that, "You'd be surprised to find how many little details need to be researched...You might say that this obsession with detail is a bit much for a kid's book, but it is important to get these things right, or at least as right as you can."

With these first steps completed, the book designer then offers him a general layout combining the sketches and the text. Using transfer paper underneath the layout, Manders traces the images onto watercolor paper and is ready for painting. In what is called an "old masters" technique, wherein he also blends new and old methods, Manders first prepares an underpainting of one color so as to separate lighter and darker parts of the illustration, laying down opaque watercolors to create the final painting. The paint he uses is gouache, an opaque water color, favored because of its thickness and inability for other colors to show through. Using a plant mister to retain the paints' moisture, Manders prefers standing at an easel, helping him to make "more energetic brush strokes." Other tools like sponges and toothbrushes are used to flick bits of paint, depicting particles, explosions, and other such effects.

Even though painting the illustrations for a book could take months, Manders approach to painting attempts to make the illustrations look spontaneous, as if completed in a single day. His illustrations have been praised by the book reviews as "madcap artwork" belying "a rigorous and elegant technique of underpainting, dyes and washes; he gives a comic touch to such important historical moments," says Kirkus Reviews. Manders says that his illustrations reflect his "sort of cartoony and wise-guy" personality. One of his favorite subjects for his artwork is Sherman, his pet African gray parrot, who is able to speak in several languages, sing, and imitate the beeping sound of a truck backing up. In the constant search for originality in children's illustrating, Manders stresses that "you have to go outside of yourself" to come up with something fresh, reports Julie Spohn. In 2006, Manders received the Pennsylvania School Librarians' Association Award. As of 2007, his latest work is The Perfect Nest by Catherine Friend, described by Kirkus Reviews as "the gouache [opaque watercolors mixed with gum] illustrations cluck with humor and details that add giggles." He currently has a studio in Highland Park, Pittsburgh, and is married to Lisa Manders.