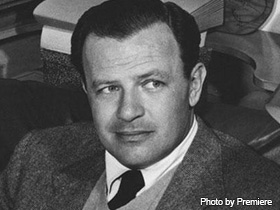 Joseph Leo Mankiewicz was born on February 11, 1909, in Wilkes-Barre, Pennsylvania. His parents, Frank Mankiewicz and Johanna Blumenau, also had an older son, Herman Mankiewicz. Mankiewicz went to a local grade school and completed high school at age 15. In 1928, Mankiewicz graduated from Columbia University after studying language and literature. After graduating Mankiewicz attended the University of Berlin for graduate study, and pursued a career in writing as a correspondent for the Chicago Tribune. Soon thereafter, Mankiewicz began writing subtitles for silent films at Germany's largest film company, Universum-film Aktien-Gesellschaft. In 1929 Mankiewicz's older brother Herman got him a job at Paramount Studios writing subtitles for movies.

Soon after Mankiewicz began working at Paramount, he started writing dialogue and entire screenplays. In 1931 he won his first Oscar nomination as a screenwriter for the movie Skippy. In 1933, Mankiewicz switched over to working for Metro-Goldwyn-Mayer (MGM) as a scriptwriter. In 1934 Mankiewicz married actress Elizabeth Young. The couple had two children; however, they divorced in 1937. After working as a screenwriter for a while, Mankiewicz decided he wanted to try directing. Instead of letting Mankiewicz direct right away, studio head Louis B. Mayer told him that, "You have to learn to crawl before you can walk," and gave him a job producing films. Mankiewicz's first production was Fury (1936), and several other films followed including Three Comrades (1938), a screenplay by F. Scott Fitzgerald. Mankiewicz greatly revised Fitzgerald's screenplay and said that "If I go down in literary history, in a footnote, it will be as the swine who rewrote F. Scott Fitzgerald."

In 1939, Mankiewicz married again to actress Rosa Stradner, and the couple had two children. Sadly Stradner committed suicide in 1958. In 1943, Mankiewicz had a falling out with the bosses at MGM and left to join 20th Century Fox where he started directing. In 1949, Mankiewicz wrote and directed Letter to Three Wives which earned him two Oscars for Best Screenplay and Best Direction. Mankiewicz's Letter to Three Wives had a plot that revolved around a single letter sent to three women saying that a woman has run off with one of their husbands. The intricate plot allows the three women to share in the same humiliation and worry about which husband has left them. In the next year Mankiewicz won the same two Oscars again for All About Eve. All About Eve was made famous by the well-known line by Bette Davis: "Fasten your seatbelts. It's going to be a bumpy night." The film also won the Academy Award for Best Picture. The following year MGM asked Mankiewicz to direct a film version of Julius Caesar which did not do as well as hoped. After the film's low success, Mankiewicz left for a career in theatre in New York.

New York also met Mankiewicz with disappointing reviews, so Mankiewicz returned to the film industry. Mankiewicz then made his first film as a director, producer, and screenwriter, The Barefoot Contessa in 1954. The following year Mankiewicz's next film was Guys and Dolls. The success of the film prompted the National Broadcasting Company (NBC) to invest in Mankiewicz's independent production company Fiargo, Inc. In 1962, Mankiewicz married Rosemary Matthews, and they had one child. The following year Mankiewicz was asked to take over the direction of Cleopatra, which ended up costing the studio too much money, and received a horrible film reviews. For almost a decade Mankiewicz did not direct or produce another film, since this was not the first time one of Mankiewicz's films had been unsuccessful. In 1972, Mankiewicz wrote his final film Sleuth, which depicted Mankiewicz's popular subtle and complex themes, shots, and dialogue.

Mankiewicz won several awards for his lifetime of achievements, including the Director's Guild's D.W. Griffith Award and Venice Film Festival's Golden Lion. Mankiewicz stopped directing because of his disagreements with modern Hollywood. Mankiewicz said in an interview with the New York Times that "I am never quite sure whether I am one of the cinema's elder statesman, or just the oldest whore on the beat." He is commemorated with a star at 6201 Hollywood Boulevard on the Hollywood Walk of Fame.

Mankiewicz enjoyed a peaceful retirement, living out his days in New York. Mankiewicz died due to heart failure in Bedford, New York, on February 5, 1993. Mankiewicz was involved with over 60 films that are revered to this day, and are an important part of the film industry. Many of Mankiewicz's colleagues entreated him to continue writing, but they could not convince him to continue his amazing work. Mankiewicz to the New York Times that "I've lived without caring what anybody thought of me, I followed very few rules. I think I've written some good screenplays, gotten some good performances, and made some good movies."