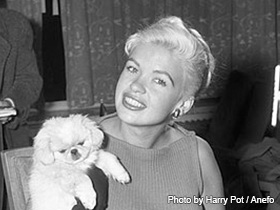 Actress and celebrity Jayne Mansfield was born in Bryn Mawr.

Jayne Mansfield was born on April 19, 1933, to Herbert and Vera Palmer. Born in Bryn Mawr, Pennsylvania, her family later settled in Dallas, Texas. Mansfield studied at the University of Texas at Austin, where she decided to become an actress. She became a well-known actress, appearing in the Broadway play Will Success Spoil Rock Hunter (1955) and movies, such as The Female Jungle (1954), Pete Kelly's Blues (1955), and The Wayward Bus (1957). She married three times and had five children. Mansfield died on June 29, 1967, in a car accident.

Jayne Mansfield was born Vera Jayne Palmer on April 19, 1933, in Bryn Mawr, Pennsylvania, to Herbert and Vera Palmer. Herbert, who was 30, died of an unexpected heart attack when she was three years old. After his death, Vera Palmer worked as a schoolteacher to support the family. In 1939, she met a sales engineer named Harry L. Peers, fell in love, and moved to Dallas, Texas. Mansfield had a middle-class upbringing and had piano, violin, and dance lessons.

When Jayne Mansfield was 17 she married Paul Mansfield, who was 21. They married on May 6, 1950, in Fort Worth, Texas. In June 1950, Mansfield graduated from Highland Park High School. She went on to give birth to her first child, Jayne Marie Mansfield, on November 8, 1950. Mansfield attended the University of Texas at Austin in 1951, and decided to become an actress. Her husband, Paul, was drafted the next year into the Korean War. During the two years he was in the army, she appeared in local television shows and plays and studied drama in Dallas. Following his discharge, the couple moved to Hollywood, California, in 1954 so Mansfield could pursue her dream of becoming a movie star.

In Los Angeles, Mansfield became a part-time model for the Blue Book Agency and worked as a photographer at The Trails, which was Esther William's nightclub. She landed her first acting role in The Female Jungle (1954). Mansfield then took a small role in Pete Kelly's Blues (1955), a movie starring Jack Webb. Jayne Mansfield and her husband separated four months after arriving in Hollywood, but the divorce was not finalized until January 8, 1958.

In January 1955, Mansfield was part of a publicity drive for the RKO Pictures movie Underwater. She wore a swimsuit that was too small and her bikini top conveniently fell off. This incident brought a lot of attention and led to spreads in Playboy. Mansfield dyed her hair platinum blond and began to act as a "dumb blond." Her looks were often compared to those of Marilyn Monroe. She landed a role in the Broadway play Will Success Spoil Rock Hunter (1955) as Rita Marlowe, the object of the main character's affection, who sells his soul for success and her love. Mansfield went on to appear in the films Illegal (1955), Hell on Frisco Bay (1955), The Girl Can't Help It (1956), and Will Success Spoil Rock Hunter (1957). She also appeared in The Wayward Bus (1957), which was considered one of her best performances.

Mansfield met Mr. Universe 1956 Miklos (Mickey) Hargitay on May 13, 1956, while attending a Mae West performance at the Latin Quarter. They were married on January 13, 1958, at the Wayfarer's Chapel in Palos Verdes, California. The chapel was all glass, so fans were able to watch the wedding from outside, which provided a lot of publicity for the couple. The marriage was a boost for both of their careers. The couple had a son, Miklos Hargitay, Jr., who was born on December 28, 1958. They had a second son named Zoltan Anthony Hargitay, who was born on August 1, 1960. Their daughter, Mariska Hargitay, was born on January 24, 1964. The couple appeared together in a nightclub act and several films, including The Loves of Hercules (1960), Primitive Love (1966), and Spree (1967).

When Mansfield's grandfather died on January 2, 1957, she was left with a substantial inheritance with which she bought a Hollywood Mansion that she liked to call the "Pink Palace." The home was purchased for a low price because it needed a lot of repairs and since Hargitay had previously been a carpenter and plumber, he helped to rebuild the mansion. Jayne Mansfield went on to adopt pink as her trademark color. In 1963, Mansfield and Hargitay divorced. She then married Thomas Vitale Ottaviano (also known as Matt Cimber or Matteo Ottaviano) on September 24, 1964. Together they had a son, Antonio Cimber, on October 18, 1965. This marriage ended in divorce in 1966.

Jayne Mansfield died in a car accident on June 29, 1967, on U.S. Highway 90 in Mississippi. She was riding home from a nightclub engagement with her companion Sam Brody, driver Ronnie Harrison, and three children, Milkos Jr., Mariska, and Zoltan. All three of the adults were killed instantly, but the children, who were asleep in the backseat, survived with minor injuries. Mansfield is commemorated with a star at 6328 Hollywood Boulevard on the Hollywood Walk of Fame.