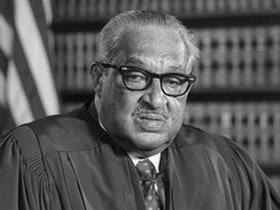 Born in Baltimore in 1908, Thurgood Marshall was an advocate for equality and freedom. After attending Pennsylvania's Lincoln University, Marshall attended Howard University to study law, where Marshall was greatly influenced by his mentor, Charles Hamilton Houston. He graduated from law school and was appointed Chief Counsel of the NAACP and fought alongside Houston to end segregation laws. In 1961, President John F. Kennedy nominated Marshall to the U.S. Court of Appeals for the Second Circuit. In 1965, President Lyndon B. Johnson appointed him U.S. Solicitor General, where Marshall won 14 of the 19 cases he argued. In 1967, Marshall was appointed to the U.S. Supreme Court, a job he held until 1991 when he retired. Marshall died at age 84 in 1993.

After attending Lincoln University, Marshall applied to the University of Maryland Law School but was denied admissionbecause (he believed) he was African-American. Marshall was accepted to Howard University Law School that same year, where he was mentored by Charles Hamilton Houston.

Houston wanted to overturn the 1898 Supreme Court ruling, Plessy vs. Ferguson, which established the "separate but equal" doctrine of racial segregation in public accommodations. Marshall soon graduated from law school, and was appointed as the Chief Counsel for the National Association for the Advancement of Colored People (NAACP) in Baltimore, an organization he was a part of from 1940 until 1961. Together with his mentor Houston, Marshall worked on court cases for the NAACP to end segregation in the school system. As Chief Counsel, Marshall argued and won the Brown vs. Board of Education decision. Marshall, along with the NAACP, convinced the Supreme Court justices to unanimously strike down the ruling of Plessy vs. Ferguson, and desegregate the public education system. This victory, and other successful challenges before the Supreme Court, led President John F. Kennedy to appoint Marshall to the U.S. Court of Appeals for the Second Circuit. In 1965, President Lyndon Johnson appointed Marshall as U.S. Solicitor General. Marshall was then nominated for the U.S. Supreme Court in 1967, a job he held until he retired at the age of 82 in 1991.

Marshall began his association with famous black literary figures while at Pennsylvania's Lincoln University, where he studied alongside poet and author Langston Hughes, future Ghanaian President Kwame Nkrumah, and musician Cab Calloway. Working as the Chief Counsel of the NAACP, Marshall was asked by the United Nations and the United Kingdom to draft the constitutions of Ghana and Tanzania, countries that had recently won independence from England. While working on the U.S. Court of Appeals for the Second Circuit, Marshall wrote over 100 decisions, including those on immigrants' rights, government intrusion in cases involving illegal searches, and right to privacy issues. None of Marshall's majority decisions has yet been overturned by the Supreme Court. As U.S. Solicitor General, Marshall won more cases before the Supreme Court than any other American.

Numerous biographies have been written about Marshall, often focusing on his civil rights activism and that he was the first African-American Supreme Court Justice. One book, published posthumously and edited by Mark V. Tushnet, collects several of Marshall's speeches, writings, and court arguments. One of the most popular biographies of Marshall is Thurgood Marshall and the Supreme Court (1997), written by Deborah Kent. A more recent biography was written by Juan Williams titled, Thurgood Marshall: American Revolutionary (1998).

Marshall died of heart failure in Bethesda, Maryland, on January 24, 1993. He is survived by his second wife, Cecilia, and two sons, Thurgood, Jr. and John. He was posthumously awarded the Presidential Medal of Freedom by William J. Clinton on November 30, 1993, for having done "more to make Martin Luther King's dream of equality real in the lives of our people than anyone in our time."