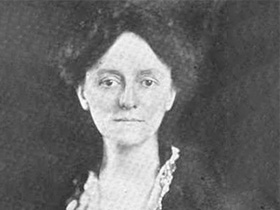 Novelist Helen Reimensnyder Martin wrote the successful Tillie: A Mennonite Maid(1904) and other pieces about the Pennsylvania Dutch.

Born in Lancaster, Pennsylvania, on October 18, 1868, Helen Reimensnyder Martin was most famous for her work on the Pennsylvania Dutch. Her most successful novel was Tillie: A Mennonite Maid (1904). Martin has been critiqued for her harsh treatment of the Pennsylvania Dutch in her writing, but she continued to make them the subject of her novels until her death in New Canaan, Connecticut, on June 29, 1939.

Helen Reimensnyder Martin was born on October 18, 1868, in Lancaster, Pennsylvania. She was the fifth child born to Reverend Cornelius and Henrietta (Thurman) Reimensnyder. An immigrant German clergyman, Reverend Cornelius Reimensnyder was a Lutheran pastor. Martin was called "Bill" by those who knew her because her parents expected a boy and wanted to name her William Allen after her mother's uncle, a governor of Ohio. Martin's ambition as a youth was to be a writer, although she did not receive much encouragement from her family. She began teaching a class in her home and then taught high school in Shamokin, Pennsylvania. In addition, Martin taught in a fashionable private school in New York City. She did not enjoy teaching. She went to Swarthmore and Radcliffe Colleges, taking courses in English and History. Martin did not graduate, and instead she wrote Elusive Hildegarde(1900) and Warren Hyde(1900). Although the novels were privately publishedby a rich friend of hers, they were not successful.

Martin married Frederic C. Martin on September 5, 1899, a German music teacher and prominent musician from Harrisburg, Pennsylvania. Martin resided in Harrisburg, where she continued writing, but she changed her focus to short stories about the Pennsylvania Dutch. While McClures Magazine published these stories as early as 1902, Martin's first successful novel did not come until Tillie: A Mennonite Maid, which was published in 1904. Around this time, Martin gave birth to her first child, who died in infancy. She had two more children, a boy and a girl.

Tillie: A Mennonite Maid centers on a young Dutch girl who wants to educate herself. She is encouraged by her teacher at the village school and later a Harvard graduate who comes to teach at the local school. Tillie dislikes the Amish environment that she is raised in, which is characterized by harsh and uneducated men. She moves with the Harvard graduate, Walter Fairchild, to Millersville to attend Normal School, and she eventually marries him.

Women's rights is an issue that appears as a theme in many of her novels. In addition, Martin's stories were the first that introduced Pennsylvania as local color literature. Another common topic found in Martin's works is the Amish. However, she has been critiqued for her portrayal of the Pennsylvania Dutch in her novels. While many say that she portrays them falsely, Martin's justification for this was that she was not one of them and could judge them without bias. For the most part, she usually represents the Dutch as illiterate and ignorant, but she is especially harsh on the Dutch men, who are usually seen as oppressors of women. Beverly Seaton, a faculty member at The Ohio State University-Newark, argues that Martin's novels reinforced stereotypes that were already in place at the time about the Pennsylvania Dutch. She criticized Martin for inserting false dialect in the dialogues of the Pennsylvania Dutch.

Another critic was Joseph Yoder, a writer who was a Pennsylvania German with an Amish background. He resented Martin's depictions of the Amish; he then became motivated to write Rosanna of the Amish, which directly refers to Martin's popular books. In addition, he counters each argument that Martin makes about the Amish with one of his own.

Martin published thirty-five novels and numerous short stories between 1896 and 1939. Tillie: A Mennonite Maid is her most well-known and successful novel. It was re-written into a play by Frank Howe in 1926. Four of her literary works were turned into Hollywood pictures, and one, Erstwhile Susan (1914), was shown on Broadway.

Martin died on June 29, 1939, in New Canaan, Connecticut. She was survived by her son and daughter.