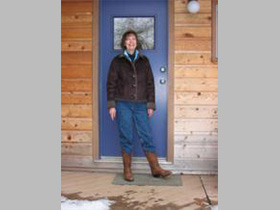 A novelist (In Country) and short story writer (Shiloh and Other Stories), Bobbie Ann Mason taught at Mansfield University during the 1970s.

Bobbie Ann Mason is an acclaimed novelist and short story writer. Her rural upbringing in Kentucky greatly influenced her works. After graduating with a Ph.D. from the University of Connecticut, Mason taught at Mansfield University in Pennsylvania from 1972-1979. Her two most famous works are In Country (developed into a feature film) and Shiloh and Other Stories (winner of the Ernest Hemingway Foundation Award for fiction). Mason currently lives in rural Kentucky and continues to write, preparing to release a new book of short stories and a non-fiction book.

Bobbie Ann Mason was born on May 1, 1940 in Mayfield, Kentucky to Wilburn and Christina Mason. The Masons were not a wealthy family by any means, as Mason's father, Wilburn, was a dairy farmer. Mason had four siblings. Growing up in this rural Kentucky town, Mason learned to appreciate the charms of country life. She also understood that big business and outside cultural and political events would be playing a big part in the evolution of rural Kentucky. Mason first became interested in writing in college, and began working for the local newspaper. She attended the University of Kentucky and earned a Bachelor of Arts Degree in 1962. She got her M.A. from the State University of New York-Binghamton in 1966. She finished up her academic career at the University of Connecticut, earning a Ph.D. in English in 1972. During her time at the University of Connecticut, Mason met Roger B. Rawlings, a magazine editor and writer. The two married in 1969.

Following her Ph.D. work, Mason moved to Mansfield, Pennsylvania, in rural Tioga County. She taught journalism and English as an associate professor of English at Mansfield University from 1972-1979. During her time at Mansfield, her first ever work, Nabokov's Garden: A Guide to Ada (which was her doctoral dissertation) was published in 1974. Mason's career took off in the late 1970s and early 1980s, through a correspondence with The New Yorker. Mason would frequently submit short stories to The New Yorker, only to have them rejected. Finally, in 1980, her short story, "Offerings," was published in the February 18 issue. This initial publication at The New Yorker opened the floodgates for Mason, as she would have many of her short stories published in the magazine. To this day, Bobbie Ann Mason writes various stories and articles for The New Yorker.

Mason put together some of her stories from the magazine in 1982 and published one of her most famous works, Shiloh and Other Stories. Like many of Mason's works, these stories focus on ordinary, working-class people in rural Kentucky. A common theme not only in Shiloh and Other Stories but in all of Mason's works is that her characters have reached some sort of turning point in their lives that they need to get past and transition from. Most of the stories are written in the present tense and arrive at open-ended conclusions. For instance, in "Shiloh," truck driver Leroy Moffitt, at home with his wife, Norma Jean, for the past three months because he has badly injured a leg in an accident, "is not sure what to do next," although he is fairly certain he will not return to making long hauls. When Leroy and Norma Jean married at eighteen, she was pregnant with a child who died in infancy of sudden infant death syndrome. Placed in close quarters for the first time since their marriage sixteen or so years earlier, they begin to notice things about one another that were previously easy to overlook. The collection of short stories was highly acclaimed, earning Mason several award nominations and winning the Ernest Hemingway Foundation Award for best fiction in 1983.

Mason quickly followed up this success with perhaps her best-known work, the novel In Country, in 1985. The story is potent portrayal of the long-term effects of Vietnam on Samantha Hughes, a recent high-school graduate who never knew her father, Dwayne, because he was killed in the war; on her mother's brother Emmett Smith, who enlisted following the death of his brother-in-law; and on Emmett's veteran buddies who, like him, still have trouble readjusting to everyday life. Moreover, Mason looks deeply into the broad impact of the Vietnam War on the American psychological landscape as a whole. Once again, Mason's story takes place in rural Kentucky. Mason's novel was so successful that it was adapted into a major motion picture in 1989, starring Bruce Willis. Mason's themes always seem to involve traditional rural values versus an "outside" culture. As Meredith Sue Willis noted in the Washington Post Book World, Mason "has a reputation as a regional writer, but what she is really writing about is the numerous Americans whose dreams and goals have been uplifted and distorted by popular culture." According to David Quammen in the New York Times Book Review, "Loss and deprivation, the disappointment of pathetically modest hopes, are the themes Bobbie Ann Mason works and reworks. She portrays the disquieted lives of men and women not blessed with much money or education or luck, but cursed with enough sensitivity and imagination to suffer regrets." Mason's autobiography, Clear Springs: A Memoir, written in 1999, was a finalist for the Pulitzer Prize.

Mason has written several works over the years, and continues to write today. She still contributes to The New Yorker and is a special guest lecturer/instructor at the University of Kentucky. She is due to come out with a nonfiction historical work on Kentucky, and a new collection of short stories. After leaving her position at Mansfield University, Mason moved back to her home state of Kentucky, where she lives today.

This biographical sketch was prepared by Rich Deuschle.