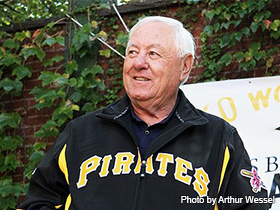 Growing up in southeastern Ohio, Bill Mazeroski spent a lot of time playing ball in the neighborhood. He spent 17 years with the Pittsburgh Pirates, from 1956-1972, in which he became arguably one of the best fielders to ever play the game. He was a seven time All-Star, won the Gold Glove Award eight times, and has a career total of 1,706 double plays. His "claim to fame," however, was one crack of the bat, on October 13, 1960. Mazeroski is still the only player to ever hit a game seven "walk off" home run in the World Series.

William Stanley Mazersoski, "Maz," was born September 5, 1936, in Wheeling, West Virginia, to Lew and Mayme Mazeroski. Mazeroski grew up in the Upper Ohio Valley in southeastern Ohio, close to Pittsburgh, Pennsylvania. When he was a young boy, he would play with a rubber ball around his neighborhood. In order to get his first baseball glove, he dug an outhouse hole for his uncle Og. Mazeroski's father had played baseball as a kid, and wanted Bill to grow up playing.

Mazeroski attended Warren Consolidated High School in Tiltonsville, Ohio. He excelled on the varsity baseball team, as well as the basketball team. He started on the varsity baseball team as a freshman. While on the team, he played shortstop and pitcher. His high school coach, Al Burazio felt he would be able to play semi-pro almost immediately. Upon graduation from high school in 1954, at 17 years of age, Mazeroski was signed by the Pittsburgh Pirates, with whom he would spend his entire career.

Mazeroski would spend his first two seasons in the minor leagues, playing one season in Williamsport and one season in Hollywood. Although he was signed to the Pirates as a shortstop, it was in the minor leagues that he was transferred to second base. Mazeroski went on to make his major league debut on July 7, 1956. In his very first Major League appearance, Mazeroski turned his first double play, stemming from a Willie Mays hit. After two seasons of getting adjusted to the "big leagues," he had a fantastic 1958 season. He finished the season with 19 home runs and 68 RBIs. He was chosen to play second base in his first All-Star game, and he won his first of eight Gold Gloves. Including the 1958 season, Mazeroski led the league in fielding percentage for five consecutive seasons.

When people hear the name Bill Mazeroski, it is usually one life changing swing of the bat that comes to mind. This moment comes in the bottom of the ninth inning, in game seven of the 1960 World Series. The score was tied, Yankees 9, Pirates 9. Mazeroski was lead batter of the inning, facing Yankee pitcher Ralph Terry. Mazeroski let the first pitch go by. On the second pitch, he swung, knocking the ball over the left field wall at Forbes Field. The Pirates defeated the Yankees in the World Series, and Bill Mazeroski's home run is thought to be one of the most important home runs in baseball history. To this day, this shot still ranks as the only game 7 "walk off" home run in World Series history. Mazeroski was struck with multiple emotions with this swing of the bat. "As kids, we'd say, It's bottom of the ninth, game tied...I got to live that dream. I am one of the lucky people in the world," Mazeroski says mentioning the fictional situations that many children play out in their minds. Many people do not realize that this famous home run was not the only thing he did in the 1960s World Series. Mazeroski also hit a two run home run in a six-to-four Pirates victory in game one, and a two run double in a Pirates victory in game five. Mazeroski won the Babe Ruth Award as the outstanding player of the series.

Mazeroski fell into somewhat of a slump during the 1961 season, but recovered in the following seasons. In 1962, Mazeroski set a team high of 81 RBIs, despite batting eighth in the lineup. He also had a great defensive season in 1963, winning his fourth Gold Glove award. During training camp of the 1965 season, Mazeroski broke his foot and therefore did not start the season until May. In 1966, the Pirates as a team set a defensive record. This was a year that Mazeroski was teamed up with Gold Glove shortstop Gene Alley. Alley once said, "Whenever we were playing, I was always hoping they would hit it to Maz." The Pirates turned a National League record 215 double plays in 1966 with Mazeroski and Alley at the center. Mazeroski was a part of 161 of these double plays, which was the most ever for a second baseman.

Everyone seemed to notice the amazing talent that Mazeroski had on the defensive side, and the great talent he had at turning double plays. Dick Groat, a teammate of Mazeroski's, said, "I always said my wife could have led the league in double plays with Mazeroski at second base if she were a shortstop. He was that good."

In the 1967 season, Mazeroski was suffering from pulled muscles in both of his legs, yet he refused to sit on the bench. He set a National League record for most games played in a season, with 163, and also set a National League record for consecutive games played by a second baseman, with 392. Mazeroski also won his eighth Gold Glove award in 1967. From this point on, his leg problems began to get the better of him. Mazeroski was limited to no more than 70 games a season in 1969, 1971, and 1972. Mazeroski retired as a player on October 24, 1972, and became a full-time coach for the Pirates. He did not stay in the coaching business for very long, because, in his words, "I didn't like coaching that much."

Mazeroski was able to retire from the game as one of, if not the greatest defensive second baseman in Major League history. Mazeroski is very proud of his defensive accomplishments over the years, as he very well should be. He argues his viewpoint saying, "over 17 years, saving thousands of runs is like driving in thousands of runs. It's the same thing. You save one, you drive one in. So, whats the difference?" Mazeroski holds the all-time double play mark with 1,706. According to Total Baseball, Mazeroski rates a 36.3 player rating, which ranks him 62nd on the all time list. Mazeroski's number nine jersey was retired in Pittsburgh in 1987.

In 2001, Mazeroski was elected to the Major League Baseball Hall of Fame. This tremendous honor meant a lot to him, as he was teary and did not come close to getting through the twelve-page speech he had prepared. He did, however, manage to get out the words, "Defense belongs in the Hall of Fame—as much as pitching and hitting." Mazeroski is currently retired in Panama City, Florida, and often attends Pirates spring training to act as a special infield instructor.