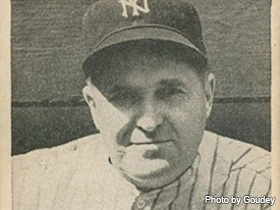 Joe McCarthy was the successful manager of the New York Yankees from 1931 to 1946.

Joseph Vincent McCarthy was born in Philadelphia, Pennsylvania, in 1887, where he grew to idolize Philadelphia Athletics manager Connie Mack. After attending Niagara University, he played baseball in the Minor League for 15 years. Although he never played in the major leagues, he spent a brief time with the Chicago Cubs, and then he became one of the most influential managers of the New York Yankees. In 1957, he earned his way into the Baseball Hall of Fame. Joe McCarthy died in Buffalo, New York, in 1978, at the age of 90.

Joseph Vincent McCarthy was born on April 21, 1887, in the Germantown section of Philadelphia, Pennsylvania. McCarthy grew to idolize Connie Mack, who was the manager of the Philadelphia Athletics at the time. He also played sandlot baseball, but unfortunately he broke his kneecap, crippling his chances of playing professional ball. Nevertheless, this injury did not put an end to his baseball career. After attending Niagara University in New York, McCarthy began his professional career in the Minor League in 1907, which is when he began playing for Wilmington, Delaware, in the Tri-State League. He continued to play until 1921, playing for a series of different Minor League teams, including Indianapolis, Wilkes-Barre, Buffalo, Louisville, Franklin, and Toledo. McCarthy's baseball career, however, would not be marked for his time on the field; instead, it would be for his ability as a manager.

Joe McCarthy is one of very few successful managers who never played in the Major League. He began his career as a manager with Wilkes-Barre and Louisville, which were in the Minor Leagues. He led Louisville to win American Association pennants in 1921 and 1925. Although he was still in the minors working as a manager, he left the minors after he was hired as the manager of the Chicago Cubs for the 1926 season. He led the team to their 1929 National League victory. Unfortunately, McCarthy was fired in 1930 near the end of the season. Fortunately, he was immediately hired by the New York Yankees in 1930, a year and a half after the death of Miller Huggins. As a the manager of the Yankees, he helped to solidify the team's place as the dominant franchise in the MLB, with a World Series title in 1932, and four consecutively from 1936 to 1939.

The Yankees became the first team to win more than two World Series in a row. The franchise also became the first American League team to win four straight pennants. The Yankees went on to win three more AL titles from 1941 to 1943 before McCarthy resigned in May 1946. He resigned due to misunderstandings with the club's operator, Larry MacPhail. However, his did not stop his involvement in baseball. Joe McCarthy returned as the manager of the Boston Red Sox from 1948 to June 1950. Unfortunately, he was unable to capture a pennant, despite coming close with a one-game playoff with the Cleveland Indians in 1948. Finally, in June 1950, McCarthy officially retired. Due to his outstanding career with the Yankees, Joe McCarthy was elected into the National Baseball Hall of Fame in 1957. On April 29, 1976, the Yankees dedicated a plaque for their Monument Park to him. This plaque reads: "One of baseball's most beloved and respected leaders."

After retiring, he and his wife Elizabeth ("Babe") McCarthy, lived quiet lives on their 61-acre farm outside of Buffalo, New York. He spent his days enjoying his life outside of the spotlight, by hunting, fishing, and enjoying the great outdoors. In November 1977, he became ill with pneumonia and was hospitalized at the Millard Fillmore Hospital in Buffalo. Joseph Vincent McCarthy passed away on January 13, 1978, at the age of 90.