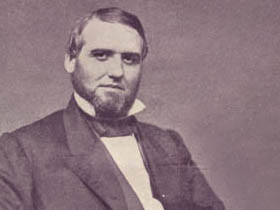 Nineteenth-century publisher and politician, Alexander McClure was born in the Sherman's Valley of Perry County.

Alexander Kelly McClure was born on January 9, 1828, in Sherman's Valley, Pennsylvania (modern Perry County) to Alexander and Isabella Anderson McClure. Despite the lack of a formal education, McClure had a distinguished career as both a journalist and a politician. In 1852, McClure purchased the Chambersburg Franklin Repository and used it to gain notoriety around Harrisburg. This notoriety helped him gain momentum for a political career and in 1857 he was elected to Pennsylvania's House of Representatives. McClure, along with Andrew G. Curtin, played a vital part in swinging state support to Abraham Lincoln during the Presidential election of 1860. Later in his life, McClure traveled out West and his book Three Thousand Miles Through the Rocky Mountains (1869) was used by many as a guide to the West. In 1875, McClure returned to Philadelphia where he started The Philadelphia Times and served on the Pennsylvania State Supreme Court. He died on June 6, 1909, on a farm in Wallingford, Pennsylvania.

Alexander Kelly McClure was born on January 9, 1828, in Sherman's Valley, Pennsylvania (modern Perry County) to Alexander and Isabella Anderson McClure. Growing up on a farm, McClure received hardly any formal type of education. He received most of his education from his parents and from a few local schools. To quote an article in the Chicago Daily Tribune on June 7, 1909, he "got no further than long division and never learned how to phrase a sentence." When McClure turned fourteen, he got his first job by being apprenticed to a tanner. A few years later, he worked as a printer at the local Perry County Freeman. He found an interest at the paper and turned this interest into a long and distinguished career as a journalist. At the same time this propelled him into politics.

McClure's experience at the Perry County Freeman helped him land a job at the Juniata Sentinel, a Mifflintown-based newspaper. He became their editor and publisher in 1846. It was at this newspaper that his Whig political views became well-known among Pennsylvania's political leaders. This can be attributed to the fact that Mifflintown is a little less than fifty miles away from the state capital of Harrisburg. McClure was subsequently appointed to the staff of the first Whig governor of the Commonwealth, William F. Johnson, with the honorary rank of colonel. In 1850, Millard Fillmore then appointed McClure as deputy United States Marshal for Juniata County.

After moving to Franklin County in 1852, McClure purchased the Chambersburg Franklin Repository eventually turning it into one of the most prominent newspapers in the area. That same year he married Matilda S. Gray, with whom he had at least one child, a son. Despite the lack of a formal education in his early years, McClure decided to study law and eventually was the Whig candidate for auditor-general in 1853. At that point, he was the youngest man in Pennsylvania history to be nominated for state office. He ended up losing the election but won admission to the Franklin Bar in 1856. By losing the election, McClure was able to return to his major interests: politics and the press.

McClure's interest in the Whig party was slowly fading and giving way towards the newly-formed Republican Party. His passion for politics were best exemplified when McClure's very Republican-minded Franklin Repository had an on-going debate with the local Democratic Valley Spirit. McClure was outspoken on the issue of slavery. He was vehemently opposed to slavery and attended the Commonwealth's Republican organizing convention in Pittsburgh in 1856. After attending the convention, McClure ran for a seat in Pennsylvania's House of Representatives and was elected in 1857. He was very popular in Franklin County where he was re-elected in 1858 and 1859. He then won a seat in the Pennsylvania Senate in 1860.

McClure's elections to state office gained him much notoriety, but the Republican National Convention in 1860 propelled him onto the national political scene. At that time, Simon Cameron was a prominent figure in the Pennsylvania Republican organization but someone whom McClure did not particularly like. Cameron was planning to run for the Republican nomination for the presidency. McClure wanted to gain a spot on the state's delegation to the Republican National Convention, but knew that the only way he would was if he pledged support of Cameron. Once McClure was nominated to the state's delegation to the Republican National Convention, after pledging his support of Cameron, he formed a group of allies. This group included friend, Andrew G. Curtin. Both used their connections to play a vital role in swinging the state's vote from Cameron and New York's William Seward to Illinois's Abraham Lincoln. When Lincoln won the Republican nomination, McClure reaped the benefits. In the fall of 1860, McClure became chairman of the Republican state committee. He then helped to elect Curtin to governor of Pennsylvania and in November helped Lincoln win Pennsylvania's electoral votes in the general election. Lincoln impressed politicians and the public with his wit and command of the English language but none more so than McClure himself. He later wrote, "Lincoln's stories are like Lincoln himself. The more we know of them the better we like them."

Once the Civil War hit, McClure helped rally support for the war as chairman of the state's Senate Committee on Military Affairs. He helped Governor Curtin plan a meeting in Altoona of the "Loyal War Governors of the North" on September 24 and 25, 1862. Fourteen governors met at the Logan House in Altoona to offer their continued support of the war despite the setbacks the North had endured at this point in the war. No official records of the meeting were kept; however, the governors drafted an address to Lincoln pledging him their confidence should he need additional troops in order to preserve the Union. This meeting was vital to public support of Abraham Lincoln and the Union at one of the crucial crossroads in American history. McClure would later write, "History is full of pointed examples teaching that the nation that has outlived heroism has ever dated its decline and fall."

McClure was seen as a loyal Republican by President Lincoln, and was commissioned as an assistant adjutant general under Lincoln himself to help provide seventeen Pennsylvania regiments to Union armies. McClure came into direct contact with the war while the Confederacy occupied the town of Chambersburg during this time. In fact in 1863, McClure personally met with General Lee during the second of the Confederacy's occupations of the town. In 1864, during the Confederacy's third occupation, McClure's "Norland" estate was intentionally destroyed by the Confederate army. McClure's home as well as the entire town of Chambersburg was burned to the ground. McClure then moved to Philadelphia. This same year, McClure won election to the Pennsylvania House and helped Lincoln carry Pennsylvania again in the general election. Lincoln's second term was brief; McClure's admiration for Lincoln, however, continued throughout the rest of his life. Nearly thirty years after Lincoln's death, in a speech addressing the Pennsylvania House of Representatives, McClure declared, "It was the heroic epoch of 1860 that called him to leadership, that made his name immortal, and that will make his memory worshipped in every clime where liberty has votaries."

After Lincoln's death and the end of war, McClure's health as well as his personal finances deteriorated due to his wartime efforts. In 1867, McClure wrote a book called Three Thousand Miles through the Rocky Mountains while traveling out West to regain his health and clear his mind. This book eventually became a popular source about the West. Describing the frontier and gold rush and the lawmen of the West, McClure wrote that, "While there is a thief, a murderer, a defaulter of a savage to disturb the peace of Montana, he will remain the most efficient messenger of justice in the mountain gold regions." It was during this time of travel that McClure gained an interest in mining and decided to invest some of his money into western mining. He became a representative of the Philadelphia-based Montana Gold and Silver Mining Company and was superintendent of one of the company's mills at the Oro Cache vein in the Montana Territory. After he was done traveling out West, McClure returned to Philadelphia in 1868 to practice law after first supporting Ulysses S. Grant at the Republican National Convention.

McClure's views on the Republican Party then slowly became distorted. By the time of Grant's reelection bid, McClure had left the Republican Party and threw his support to Horace Greeley and the Liberal Republican National Convention. In Philadelphia, McClure gained a seat in the Pennsylvania Senate as an independent Republican in 1873. In 1874, he ran for mayor but lost by a mere 900 votes. McClure never ran for office again.

He returned to the newspaper scene by founding The Philadelphia Times with Frank McLaughlin as an "independent, anti-corruption voice for Philadelphia" in 1875. McClure used the paper's editorials to attack the political partisanship he once favored. It was also during this time that McClure wrote The South: Its Industrial, Financial, and Political Condition (1868). The book recounts the observations of the South that McClure had experienced during the Civil War. In it, McClure praised the cities of Birmingham, Mobile, and Nashville for their beauty and variety of industry. He also wrote about race relations in the South. After slavery was abolished, McClure recognized the next hurdle to overcome: integration. "Here, as elsewhere in the Union, and as elsewhere in every civilization of the world, intelligence, integrity, and property will inevitably rule in the end," he wrote. McClure continued as The Philadelphia Times' editor until 1901 when he sold the newspaper to Adolph Ochs. During his tenure at the paper, he married Cora M. Gratz in 1879 with whom he had no children. Little is known of the fate of his first wife.

After selling his Philadelphia-based newspaper, McClure had a considerable amount of wealth. However, this soon turned sour when he lost much of his fortune in the stock market. However with the help of some former political enemies, he received an appointment as a law clerk of the Supreme Court of Pennsylvania. It was a lifetime appointment that earned him a salary of $12,000. Alexander Kelly McClure eventually passed away on June 6, 1909, outside of Philadelphia on a farm in Wallingford, Pennsylvania.