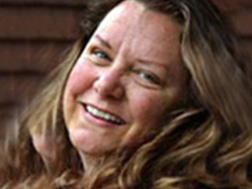 Creator of the Judy Moody series of young adult books, Megan McDonald was born in Pittsburgh.

Megan McDonald was born in Pittsburgh, Pennsylvania, on February 28, 1959. Influenced largely by her upbringing in a family of five girls, Megan McDonald has become a popular children's author. Most famous for the Judy Moody series, McDonald has published over 25 children's books as well as books for young adults.

Megan McDonald was born on February 28, 1959, to John and Mary Louise McDonald of Pittsburgh, Pennsylvania. The youngest of five sisters, McDonald often had difficulty getting a word in edgewise at the dinner table. Because of her inability to express herself amidst her older siblings, McDonald's mother gave her a notebook to write her thoughts down in. This experience, along with the author's vivid imagination as a child, became the foundation for the young girl's later career as a children's author. McDonald and her sisters shared a love of reading from very early on in life. Exposed to many different authors, genres, and styles, the author said in her biography in Something About the Author, "Before I was a writer, I was a reader." McDonald wrote her first story about a pencil sharpener in elementary school. The story was told from a first person's point of view. As McDonald said in Something About the Author, the story simply, "detailed a life of eating pencil shavings all day." However, this experience was important to the author as it made her realize the importance of having her own voice in her writing. McDonald's pencil sharpener story became her first published work at age ten in her school's newspaper. As an adult, the author firmly believes that any idea can be turned into a story. Another influential moment in McDonald's life was meeting Katherine Paterson, McDonald's hero and author of one of her favorite books, Bridge to Terabithia. This experience largely persuaded McDonald to pursue writing as a career.

After high school, McDonald attended Oberlin College in Ohio where she planned to study Creative Writing. However, it would take time and persistence before McDonald found her niche in the realm of writing and literature. The professor for her first writing class told her to tear up all of her poetry because she was a prose writer, not a poet. This statement confused and upset the young woman. Still, McDonald worked hard and took the professor's advice to heart. After a great deal of time and effort, McDonald received a B.A. in English with a focus in Children's Literature in 1981. McDonald received a full scholarship to study Library and Information Science at the University of Pittsburgh and earned her M.L.S. in 1986. The author also met her future husband, Richard Haynes, while attending graduate school. After graduation McDonald worked as a children's librarian at the Carnegie Library in Pittsburgh for four years, until 1990. Because she wanted more time to spend on her writing, McDonald accepted a job at the Minneapolis Public Library in Minnesota. Here she was able to work half the amount of time while still making the same amount of money as she did in Pittsburgh. However, the cold winters and being away from home caused the author to move back to Pittsburgh where she worked as a children's librarian the Adams Memorial Library in Latrobe, Pennsylvania. This job, along with many other life experiences, became influential when writing children's literature later in life.

Is This a House For Hermit Crab?, McDonald's first book, was published in 1991. It received the Teachers' Book Choice Award by the International Reading Association and Children's Book Council. The popular book was also featured on Reading Rainbow that year, making Megan McDonald one of the most popular new authors of 1991. That same year McDonald's parents both passed away within five months of each other. Their deaths were very hard on the author, and she had trouble writing for quite some time. A change in scenery would prove to help McDonald to continue with her writing. In September of 1994 she married Richard Haynes and moved to Sebastopol, California. McDonald's only requirement for the California move was that the town had both a coffee shop and an independently-owned bookstore. Fortunately, Sebastopol was just the place for the couple. Hayes worked as a teacher while McDonald worked at both the local public library and bookstore, giving talks to schools on the side. The author went on to publish more popular children's books, including The Great Pumpkin Switch and the first book in the Beezy series. McDonald also published young adult novel, The Bridge to Nowhere. The book is heavily based on the author's experiences growing up in the Pittsburgh area. The main character in the book, Hallie, deals with issues of family life, including an older sister spending her first year away from home at college and the loss of her father's job as a bridge builder. The novel won the Judy Blume Award for Contemporary Fiction, showing that McDonald could write young adult literature as well as children's literature.

Following the publication of Is This a House for Hermit Crab?, The Great Pumpkin Switch, and The Bridge to Nowhere, McDonald's editor, Richard Jackson, who had been a great source of encouragement for the author, decided that he would not be able to take on the amount of work that McDonald was writing and getting published.

McDonald was able to find a new editor, Mary Lee Donovan who helped to develop the author's most popular work to date, the Judy Moody series. Along with Peter Reynolds, the team successfully created a series of children's books that have been published all around the world in many languages.

In 1999 the first Judy Moody book was published. McDonald states on her personal website, "Sometimes I think I am Judy Moody." McDonald was able to create the character of Judy as a version of her younger self growing up with four older sisters. Many of the character's experiences are based on events that occurred in the author's life. Judy, a spunky third grader, deals with common childhood issues, such as having to get along with her younger brother, the difficulty of fitting into a group, and searching for her own special place in the world. Judy Moody's fresh outlook on life as a child earned the author high praise. It was named the Publishers Weekly Best Book of the Year, one of New York Public Library's Best Children's Books, and an American Library Association Notable Children's Book. After the popularity of the first book in the Judy Moody series, McDonald has since written a number of books that follow the adventures of the daring young girl, including Judy Moody Gets Famous! and Judy Moody, M.D. The series has become so popular that the author has begun to write books about Judy's younger brother, Stink, and his adventures. Her most recent work was the Julie Albright series of books for the American Girl Doll of the same name.

McDonald has had the pleasure of her Judy Moody books being made into a motion picture in 2011 entitled Judy Moody and the Not Bummer Summer. Although the movie did not do well in the box office, it is still an honor and thrill to see her work stretch across multiple mediums.

On her personal website, McDonald writes, "I'm lucky to be a writer. Connecting children with books has always been the heart of my life's work." To date, the author has published over 25 books for children and young adults. She currently lives in Sebastopol, California with her husband where she continues to write.