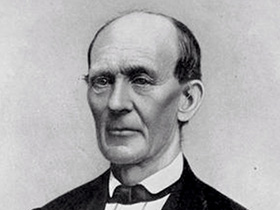 William McGuffey, author and educator best-known for his McGuffey Eclectic Readers (1836-1837), was born in Washington County in 1800.

Born in 1800 in Washington, Pennsylvania, William Holmes McGuffey worked as both a professor and a minister. His most well-known achievement is the creation of his Eclectic Readers, which helped to educate many Americans in the late nineteenth and early twentieth centuries. He was also president of two different universities before he died in 1873.

McGuffey began his education at Old Stone Academy in Darlington, Pennsylvania. He then went on to get his ABfrom Washington College in Washington, Pennsylvania. Although he did not get that degree until September of 1826, he was already teaching ancient languages at Miami University in Oxford, Ohio. While teaching, McGuffey also became a minister of the Presbyterian Church.

McGuffey made a deal with publishers Truman and Smith to write four readers that were directed toward young boys and graded them on their reading. These books not only helped the boys with reading, but contained messages about social, moral, and religious issues. They were called the Eclectic Readers to show the breadth of the educational theory behind them. These educational books are still used today.

McGuffey held the position of president at Cincinnati College and at the Ohio University of Athens. He was also active in the Western Literary Institute. Approximately 122,000,000 copies of McGuffey's Eclectic Readers were sold and were the most influential educational resource for Americans in the late nineteenth and early twentieth centuries.

William McGuffey died on May 4, 1873, in Charlottesville, Virginia, where he had been Professor of Moral Philosophy since 1845.