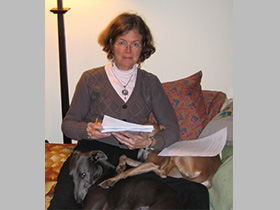 Children's author Robin McKinley was born in Ohio in 1952. Post-secondary education brought her to Pennsylvania for a three-year stint at Dickinson College. She finished her degree at Bowdoin College. She has been honored by the American Library Association with both the Newbery Medal and the Newbery Honor Book awards. At the time of this writing, she lives in Hampshire, England.

Robin McKinley was born in Warren, Ohio, on November 16, 1952. She was the only child of her father, William McKinley, a naval officer, and mother Jeanne Turrell McKinley, a teacher. She married writer Peter Dickinson.

Notable for her experience writing young adult fiction, McKinley's work illustrates the power of the young heroine. Many of her books, including her first novel, Beauty: A Retelling of the Story of Beauty and the Beast (1978), involve young women dealing with their own strength and courage. McKinley not only develops heroines in her works, she also creates a world of fantasy, as is evident in The Blue Sword(1982) and The Hero and the Crown (1984).

In addition to novels for young adults and adults, McKinley has also written picture books for children, including Rowan and My Father Is in the Navy both published in 1992.

McKinley received the Newbery Medal in 1985 for The Hero and the Crown. Her previous novel The Blue Sword won an American Library Association Newbery Honor Book award in 1983. She also won the Mythopoeic Award for Adult Literature for her 2003 vampire novel Sunshine.

Her husband, Peter, passed away in 2015. At the time of this writing, McKinley lives in Hampshire, England.