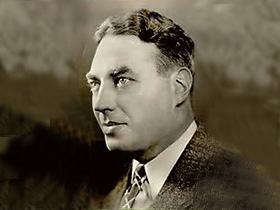 To support a growing family, Stephen W. Meader worked at many different publishing firms (including Curtis Publishing in Philadelphia). His many books, like Wild Pony Island (1959), were adventure stories for young boys.

Born in Providence, Rhode Island, on May 2, 1892, Stephen W. Meader was a prolific writer of children's adventure novels. In his lifetime, he penned nearly 50 novels celebrating the West and the American spirit of discovery. While averaging a novel per year, Meader also worked in advertising and as an editor. He championed children's rights with the Essex County Children's Aid Society and the Big Brother Movement. He was married to Betty Hoyt on December 16, 1916, and they had four children, all of whom he adored and made sure to spend time with each night. On July 18, 1977, at the age of 85, Stephen W. Meader died in Cape May, New Jersey.

Stephen Warren Meader was born on May 2, 1892, in Providence, Rhode Island, to Lucy and Walter Meader. His father was a Quaker teacher, while his mother tended the home. On December 16, 1916, he married Betty Hoyt, and they had four children, Stephen Jr., Jane, John, and Peggy Lou. A year after Hoyt's death in 1963, Meader married Patience R. Ludlam, the widow of his college roommate.

From a very young age, books were an important part of Meader's life. At four, he received Rudyard Kipling's The Jungle Book as a gift, and the Mowgli stories soon became his favorites. Certainly these stories spurred his imagination, but much of the inspiration for his later adventure stories came directly from his life experiences. At age 12, Meader's father quit the Friend's School to become a lumberjack in New Hampshire. With his father gone, Meader became the man of the house and was responsible for keeping the home heated and tending the family animals. Four years later, at age 16, he joined his father in the workforce as a sweeper at the Gonic Manufacturing Company.

Meader would only work for the summer months, however, as he and others realized his intellectual potential. A high school graduate at age 16, he attended the Moses Brown School in Providence for a year before enrolling in college at Haverford, which is near Philadelphia. Even with his additional year of preparatory work, he remained one of the youngest in his class. Throughout his college years, Meader worked for the newspaper and spent much of his time writing. His first job, however, did not indulge this love. After college, Meader worked as a social worker for the Children's Aid Society and later supported the Big Brother Movement. Though it was a difficult job, much good would come of it. Not only did he meet his future wife Betty, but it was also through his time spent working with children that he became inspired to write.

Meader was saving money for an engagement ring, so he was unable to spend all of his time writing. By 1916, he was working full time for Curtis Publishing. Soon after the couple's December 16, 1916 wedding, their first child was on its way. Shortly after that, they learned another child was on its way. Though Meader was now an editor, his income was not enough. He returned to his work on The Black Buccaneer (1920),an adventure book for boys. Upon completion in 1919, he sent the manuscript to his friend Christopher Morley at Doubleday, who forwarded it to a new publisher. A year later, The Black Buccaneer became the first juvenile book published by Harcourt, Brace, & Co.

After the publication of his first book, Meader left his job at Curtis Publishing due to a misunderstanding with management. However, with three children and another on the way, he couldn't afford to be without work for long. Soon after Peggy Lou's birth, Meader took a job as a copy writer with N.W. Ayer and Son. Meader was able to spend his evening hours at home writing and spending time with his family, a lifestyle that suited him quite well. During this time, he wrote an impressive 26 novels.

Just a few years after his 1957 retirement from N.W. Ayer and Son, Meader's wife Betty died in 1962. A year later Meader married Patience R. Ludlam, who was the widow of his college roommate. During this time, he continued writing a book per year until 1969, when at age 77, he wrote his final work, The Cape May Packet (1969). At this point, Harcourt, his longtime publisher determined his adventure stories weren't keeping with the current times. According to his son John, in "The Life of Stephen Meader," at this point he was content to simply read and relax with his wife in the Cape May at their New Jersey home.